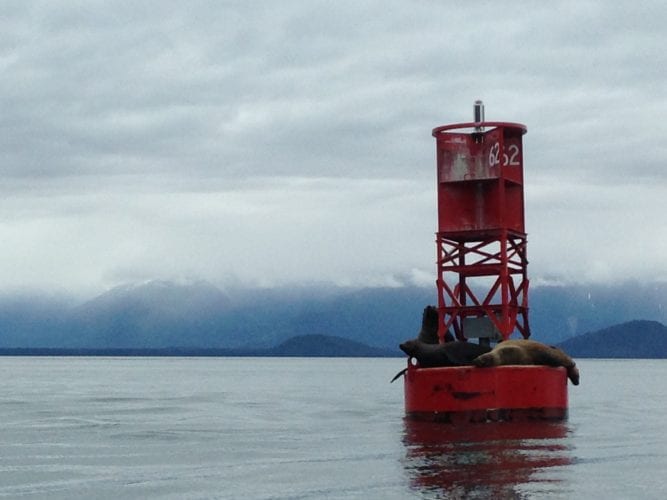 In Southeast Alaska, populations of some marine mammals, like humpback whales and Stellar sea lions, are on the rise. Some subgroups of these species have recently been removed from the Endangered Species list, leaving many commercial fisherman wondering what this means for them.

But, as KFSK reporter Nora Saks found out, it’s still business as usual when it comes to dealing with protected marine mammals in Southeast waters.

On June 7, NOAA Fisheries representatives held a virtual “community roundtable” in Petersburg to update fishermen and the public on marine mammal policies and clear up confusion.

Aleria Jensen is the Deputy of Alaska’s Protected Resources Division for the agency. She was visiting via Google Hangout.

“One of the questions I know has been on people’s minds is the pretty monumental change that happened last year for humpback whale,” said Jensen.

Three different groups of humpbacks migrate to coastal Alaska. Last September, one was delisted, one was reclassified as threatened, and one, from the Western North Pacific, remains endangered. It’s a similar story with Stellar sea lions. Two populations can be found in the area. One is endangered, and one isn’t.

Since it’s impossible to tell these genetically distinct populations apart by sight, Jensen said they all have to be treated the same and afforded full protection under the Endangered Species Act.

“So for you it’s essentially, that means business as usual,” Jensen said. “That’s really the status quo of how we’ve been operating. Nothing is changing. In terms of a vessel’s behavior around a whale.”

Sea lions can steal salmon from commercial nets or become a harbor nuisance, while whales can get tangled in nets and crab gear. There are devices like noisemakers, visual repellents, and exclusion barriers on the market intended to keep these animals away.

But there’s currently no list of agency approved or prohibited deterrence methods to guide fishermen.

Which means there isn’t a clear answer to the million dollar question of whether or not fishermen can use deterrents to protect their gear and catch, or which ones. It’s a situation which seemed to frustrate NOAA Fisheries staff as much as fishermen.

“We want to be able to help you avoid violations,” said Jensen. “We want a win-win. Nobody wants whales and gear in the same place. We have really looked to our national program to provide that guidance, and it certainly has been long in coming.”

A draft list is in the works, and should come out sometime next year. Even when the list is finalized, likely in 2019, it will only address the impact of each deterrent on marine mammals, not its effectiveness.

And, while the Marine Mammal Protection Act allows fishermen to use deterrents to protect their property as long as no animals are hurt, the Endangered Species Act does not contain the same explicit exemption.

While NOAA officials wait for better standards and clearer regulations, Jensen said that right now, they need the fishing industry’s help to come up with creative solutions.

“It’s really fundamentally such a challenging issue. How do we protect gear, catch, and how do we account for human safety, and not use something that has that injurious or negative effect to marine mammals?” Jensen asked the crowd.

NOAA Fisheries plans to hold listening sessions to gather more input from commercial fisherman, and a few stuck around to chat after the meeting.

Julianne Curry is on the board of the Petersburg Marine Mammal Center, and a long time seiner.

Gillnetter Max Worhatch said he hasn’t seen very many humpbacks so far this year, but when he does, he tries to stay away.

“I’ve got an aluminum boat, so I just take a stick and beat on the boat when they get close to the boat,” said Worhatch. “Humpbacks don’t use echolocation, they just use their ears and their eyes, so it kind of makes them aware. I’ve had minimal incidents with whales. So, it seems like it works for me.”

For now, NOAA Fisheries representatives recommend avoiding marine mammals as much as possible, and not doing anything that could cause more interactions, like dumping fish waste near boats.