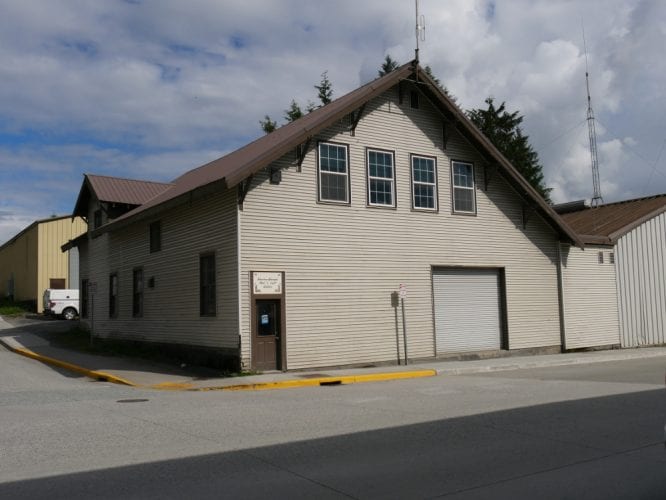 The Petersburg Municipal Power and Light building in downtown will be getting over half a million dollars in upgrades after all. Petersburg’s borough assembly Monday voted to award a contract to remodel the building at the intersection of Nordic and Haugen drives and also decided to send off a letter on mines in British Columbia.

The building dates back to the 1920s and 30s and is the offices for Petersburg’s publicly-owned electrical utility. The assembly in February voted to move forward with a remodel and seeking companies willing to do the work. Three companies bid on the contract, with the low bidder Rainforest Contracting of Petersburg for $538,600.
Borough manager Steve Giesbrecht said the company was willing to honor its bid past the 45-day deadline.

Assembly member Eric Castro asked if they had more time to consider other options.

“(I) think at this point the assembly needs to either accept the bids or refuse all bids and I recommend that we accept it,” Giesbrecht responded. “But if the assembly doesn’t wanna go that direction today then we would need to refuse the bids so Rainforest doesn’t have to kinda be hanging out to dry any more.”

Hagerman outlined what the remodel would mean for the power and light building. “There are some really, in my opinion as the public works director, very good improvements to the front of the building in that they’re going to slice off a section of the corner of the downstairs of the building to improve sight distance at that intersection,” Hagerman said. “That’s been a problem since that building’s existed. To get that addressed, mitigated at least somewhat is really a positive thing.”

The remodel will also help bring the building in compliance with the Americans with Disability Act, creating a wheelchair-accessible reception area for the public on the ground floor, and one handicap parking spot. Siding and insulation will also be replaced. The work will be paid for with electrical department reserves, built up from electricity sales in the community. The vote was 5-0 to award that contract to Rainforest Contracting.

In other decisions, the vote was also unanimous to send a letter to state officials about environmental concerns surrounding mines in British Columbia near rivers that flow into Southeast Alaska. State legislators, environmental groups and fishing industry organizations are asking Alaska’s governor and lieutenant governor to seek the federal government’s involvement in the issue. The interests are lobbying for enforceable measures to protect water quality in the Stikine, Taku and Unuk rivers.

Cynthia Wallesz is executive director of United Southeast Alaska Gillnetters. “We’re a regionwide organization made up of gillnetters,” she told the assembly. “We have 206 members, 40 of which live here in Petersburg and this is a really important issue for everyone in our membership, so whenever we kindof gauge that it comes out to be an important issue, the protecting of our resource.”

The groups are concerned with the potential for pollution from mines in British Columbia that could threaten salmon in the rivers. Assembly member Bob Lynn wanted Petersburg’s letter to include the importance of those salmon rivers from the standpoint of Southeast’s municipalities. “And you look at it would affect both the Wrangell borough, the Juneau and our borough significantly if those waters were somehow degraded,” Lynn said. “And I’d like to see us in our letter make some kind of a point that it has a major impact on the boroughs of Southeast Alaska, not only the people themselves but the economy, it goes quite a way around and I really think that that’s a pretty pertinent point that needs to be in there.”

Groups are seeking baseline water quality monitoring in the rivers and say an agreement between Alaska and the British Columbia provincial government does not do enough to protect salmon habitat. The vote was 5-0 to send a letter on the issue.