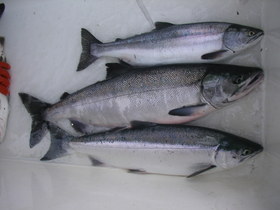 Commercial gillnetting and seining catches in central Southeast Alaska have been boosted by some strong catches of chum salmon this summer. Returns of sockeye to the Stikine River near Wrangell haven’t been as strong as forecast. Meanwhile, there are some early signs of a decent return of pink salmon.

The Southeast gillnet season started June 18 in parts of the region but not for another week in district 8. The District 8 waters around the Stikine River, Wrangell and Petersburg remained closed for a week because of a poor return of Stikine kings. When the area did open there were restrictions on gillnet mesh size to limit the catch of those Chinook. The king run on the Stikine looks like it will come in below 10,000, below the department’s goal for fish returning to spawn in the river.

As for sockeye returning to that river catches in district 8 have been low all season. That’s according to Troy Thynes the Alaska Department of Fish and Game’s area management biologist for Petersburg and Wrangell.

“It has a lot to do with we just haven’t had much effort fishing in district 8 and a lot of that effort when it opened up was targeting chum salmon down in Zimovia Strait,” Thynes said. “So our overall sockeye catch has been pretty low.”

In a mid-July opening, district 8 saw 43 gillnetters fishing and an average sockeye catch of only 35 per boat. Fish and Game had a pre-season forecast of 185,000 Stikine River sockeye, which would be an above average run. Thynes said the run is looking to come in closer to 150,000.

It’s been a little better in district 6 near Zarembo Island and northern Prince of Wales, with about the same effort and boats averaging 143 sockeye in a mid-July opening. The good news this summer has been a strong price and good catches of chum salmon. Both districts 6 and 8 saw good catches of dog salmon in the middle of the month.

The chum catches haven’t rivaled the big returns of hatchery dogs that have showed up in the northern Panhandle. A big portion of the gillnet fleet has been chasing those chums with 110 boats fishing near the Taku River in mid July and 80 gillnetters in Lynn Canal.

Gillnetters are getting 80 cents a pound for chums as well and a dollar 70 for sockeyes.

As for the purse seine fleet, it’s still early in the season, but catches of pink salmon are starting to ramp up. Thynes said it was a slow start for seine catches in district 10 north of Petersburg and district 7 south of Wrangell.

“But here recently there’s been some pretty good jumps in escapement and harvest is starting to pick up so it’s looking up in both those areas, especially in district 10,” Thynes said. “All indications point towards a good north end return, north end being north of Petersburg this year.” That includes recent data from two test fisheries that gauge pink and chums returning to the central inside waters. Thynes said chum numbers have been above average in those test fisheries.

“Chum salmon in both test fisheries have been above average all year long,” he said. “It looks like at least in northern Southeast both hatchery and wild chums have experienced some good survivals and are coming back good.”

The seine fleet has been spread out around the region with a total of 220 boats fishing a mid-week opening the third week of July. That opening saw decent hatchery chum catches around Hidden Falls on Baranof Island and in Amalga Harbor near Juneau. Pink catches were decent in parts of the northern Panhandle and near Sitka.

Seine caught chums are fetching 80 cents a pound and around 30 cents a pound for pinks, although those prices are often adjusted upward with bonuses after the season.