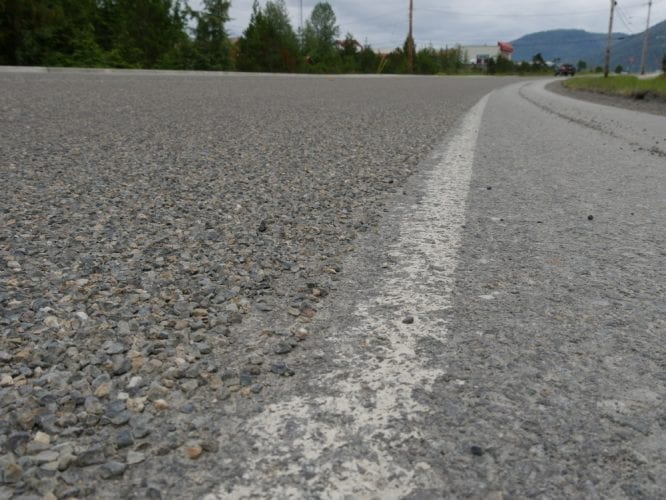 The reviews have not been positive. Cracked windshields and chipped vehicle paint are leaving frustrated motorists in Petersburg wondering why the State of Alaska is putting down chip seal on relatively new asphalt road surfaces on Mitkof Island.

The project is going on through the end of the month on Haugen Drive, Mitkof Highway and the Scow Bay Loop road. Chip seal is a way to maintain road surfaces at a lower cost than new asphalt

Alaska Department of Transportation spokesperson Aurah Landau said chip sealing is done throughout the state to extend the life of the roadway. “What it does is it fills in the micro cracks before they big enough to see or affect road conditions,” Landau said. “And so when you do the chip seal, several years after the road has been constructed and do it regularly then you delay the need to rebuild the road itself.”

The state paved portions of the roadways in 2006 and 2010. Loose gravel from the new road surface has cracked windshields and chipped paint on vehicles. Complaints and questions are piling up on Petersburg’s Buy Sell Trade Facebook site.

The state has put out announcements cautioning drivers using the roads to drive slowly and increase following distance. The DOT’s Landau said the road surface should improve.

“Well there is loose gravel for a couple of weeks after it’s put down and we put signs up with a message board telling people to slow down,” she said. “And then crews actively sweep the roads after the chip seal happens but some gravel can still come loose for a few weeks. And then the crews will continue to sweep. So for a while it’s gonna feel more bumpy and you know like it’s looser gravel but after a while it’ll all be adhered and solid and it’ll have a much smoother surface and there won’t be loose gravel coming off of there. And one thing that chip seal can do is provide really good skid resistance particularly on wet pavements, but it just takes a little while, couple weeks for the process to be finished.”

The work costs an estimated 62,000 dollars per mile, including the cost of mobilizing equipment to Petersburg. The resurfacing is happening from the ferry terminal to Papke’s Landing, over nine miles, along with several more miles on the portions of Haugen Drive and the Scow Bay Loop. That means the work is estimated to cost over half a million dollars. However, 90 percent of the project cost is being paid for by the Federal Highway Administration.

Landau says motorists with vehicles damaged by loose gravel can file a claim with the state. The recommended way to start that process is by emailing dot.ask@alaska.gov

In addition, the DOT issued a statement on the topic Tuesday:

“The Alaska Department of Transportation and Public Facilities (DOT&PF) has been conducting preventative maintenance activities in Petersburg with the goal to extend the life of the existing asphalt. This is a normal maintenance process to seal the asphalt surface before it begins to visibly deteriorate with age.

DOT&PF understands that the chip seal process has impacted some members of the traveling public. DOT&PF is taking all necessary steps to minimize impacts to vehicular, bicycle, and pedestrian traffic, including removing loose gravel from the road surface and adjacent to sidewalks and bike paths. The department is increasing construction signage to encourage the public to travel at a slower speed in the project area.

DOT&PF appreciates the communities patience and respects their concerns associated with this project. People can email DOT.ask@alaska.gov with concerns.”