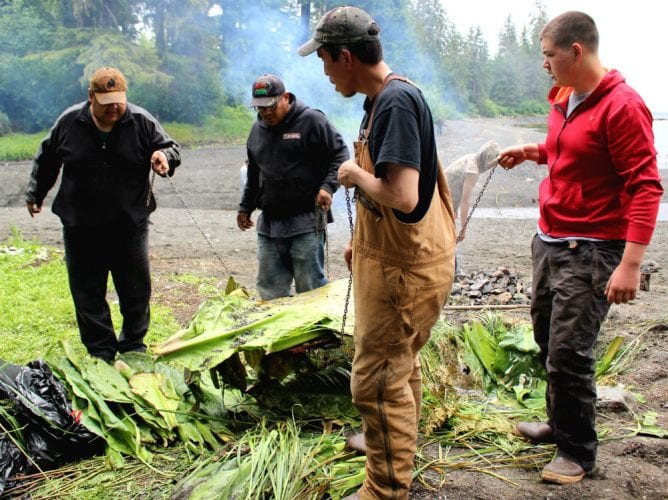 For many Alaskans, summertime is a time to put up food for the winter. That’s definitely the case in the Southeast Alaskan village of Kake.

Gathering and preparing nature’s bounty is a key part of Kake’s annual Keex’ Kwaan Culture Camp, now in its 29th summer. It’s the longest running camp of its kind in Alaska.

KFSK reporter Nora Saks spent a day soaking up life at camp, and has the story.

“So you gotta go like this and get the guts out like that and that use that to hold it up. And then cut from right here,” said Zoe James.

She turned thirteen years old today, and she’s getting to celebrate her birthday in a very memorable way – by cutting up lots of slippery dog salmon.

It’s James’ first time as an overnight camper at Keex’ Kwaan Culture Camp. That’s a big deal – because only the older kids get to work with traditional Tlingit subsistence foods. It’s a right of passage.

So far, they’ve already processed 400 pounds of halibut. A buck the night before. And a few seal. All of it is donated by community members, and all of it gets shared in a big potluck at the end of the week. 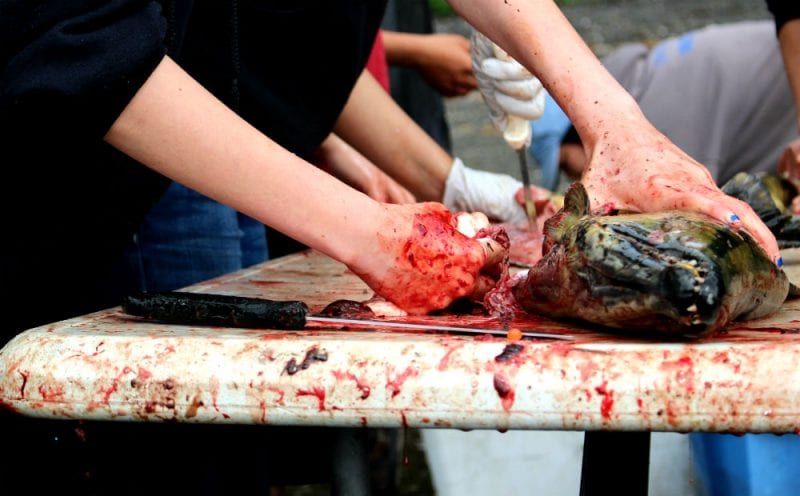 “It has that feeling when you cut it. It’s like a knife going through butter. So smooth,” Pilcher said.

A few feet away, James is still trying to saw through the salmon’s backbone to get the head off. Blood spatters her arms up to her elbow, but she is into it. Or at least she is now.

“You should have seen me when I first got here,” said James. “Drew chased me with a kidney and I screamed.”

Typical adolescent antics aside, it’s obvious a lot of the youth approach this work with a sense of real responsibility.

Pilcher walks away holding a dog salmon that’s a little substandard. Instead of throwing it in the trash, he sets it down on the beach as a gift to the eagles, and his ancestors.

“In Tlingit culture, they’re my grandparents. Gotta treat my family. Gotta give them all this food. They deserve it,” said Pilcher.

Steve Rose is the overnight coordinator. He spends a lot of time with these kids – a whole week together out in the woods and by the water, modeled after traditional Tlingit fishing camps. 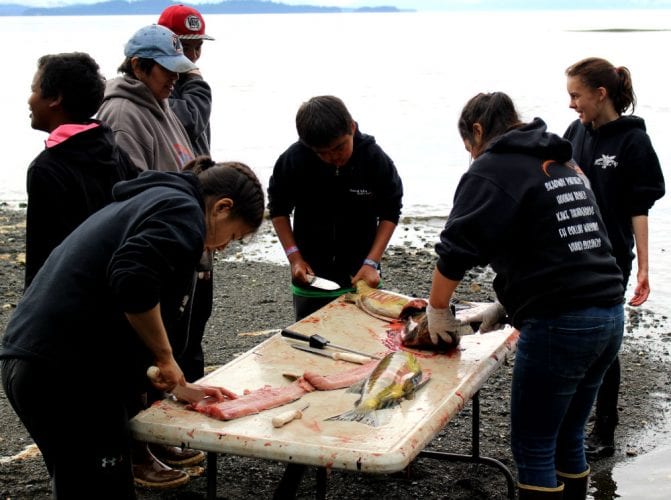 Campers filet and process dog salmon next to the beach in Kake.

And he says that kind of connection is the reason organizers started this camp almost 30 years ago.

“They were hoping kids would get interested in their culture and get away from drugs and alcohol and it really has helped a lot. You can see the difference in some of the kids from back then to today,” Rose said.

In the early 1980s, Kake had a high number of suicides. Rose is 53, and says he lost a lot of friends in those years.

He served in the military, and when he got back home to Kake in 1989, a friend got him a job at camp. It helped get him off a reckless path – and he’s been here most summers ever since.

“I probably wouldn’t be here today if I didn’t do that,” said Rose.

Today, Culture Camp is still a way to pull kids away from substance abuse, and their various digital addictions, and towards Tlingit ways of life, language, subsistence and celebration once again.

They’re also having a ripple effect on the generations that came before – which suffered from forced assimilation.

“There’s quite a few people that don’t know how to put up our food,” said Rose. “These kids go home and teach their parents, so I think it’s really making a comeback that way.”

At camp, everybody is buzzing about, getting ready for dinner that night. Around 6 pm, a bus from the senior center pulls up and delivers dozens of elders, more guests arrive, and all of a sudden, there are at least 50 people, ages zero to 80, crowded under the big tarp, balancing plates of food.

There’s everything from halibut that was cooked in a hole in the ground all day, to venison stew, to rice crispy treats. 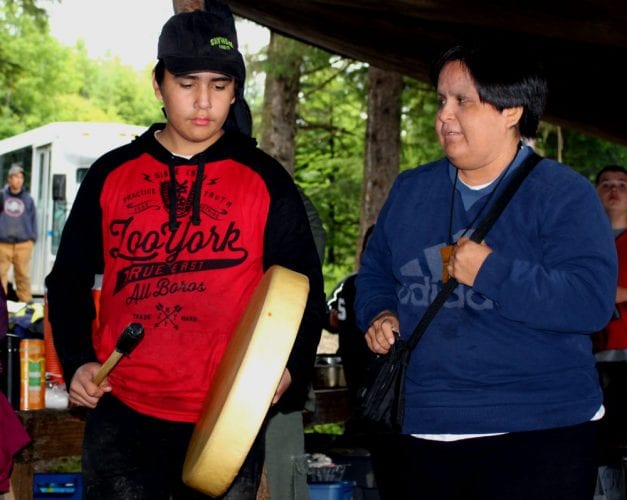 After the meal, it’s time for singing and dancing. 13-year-old Colin Rose, Steve’s nephew, hops up to center stage without any prompting.

He dances like a top that can’t stop spinning, and the crowd keeps cheering him on. He’s part of the Keex’ Kwaan Dance group – and proud of it.

“My mom danced with me two months before she went into labor- she actually still danced with me in there,” said Rose.
NS: “So you were really dancing before you were born?”
CR: “Technically my mom had me, but kinda yes.”

Some campers are less into performing, and more into documenting their own and each others’ experience. A couple have gotten curious about my recording equipment.

Jocelin is especially fascinated with the microphone and dives right in. She starts off by interviewing a dead salmon on the beach, but then moves onto the smokehouse, where campers and staff are chopping wood and hanging fish.

“Teresa! Can we ask you a few questions? It’s too smoky in there! So, what is your favorite part in the smokehouse?” Jocelin said.
“Probably the smoked fish,” said Teresa Moses.

Around 10 pm, the sun is just setting. A boat appears on the horizon. The kids sprint across the beach to see what a community member has brought them.

It’s a few sockeye – and at least ten really fresh halibut. Some are still twitching.

Staffer Jason Aceveda bends over, fighting biting insects and the darkness, and does the initial cuts on fish after fish. But when he looks up from his work, everyone has scattered.

“Ok, where did all the helpers go?” asked Aceveda.

He wrangles some teens to relay the big flat fish bodies back to camp, slightly against their will. It’s been a long day, and like many of us, they’re still figuring out how to balance work and play. 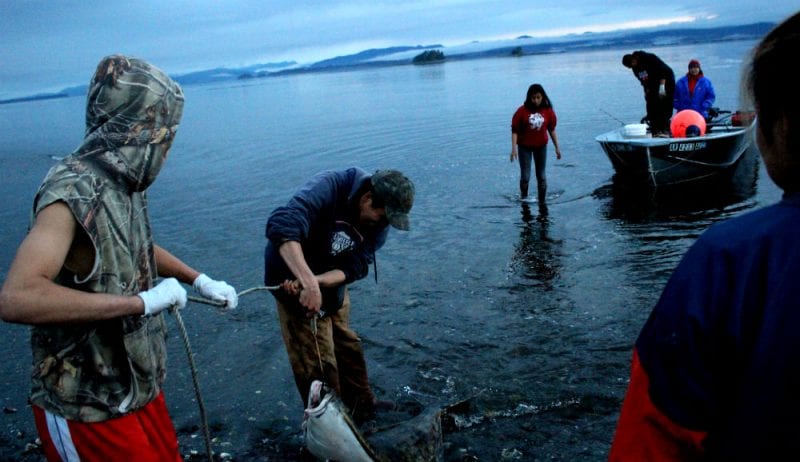 Culture Camp runs exclusively on donations. To find out more about the program, check out their website here.