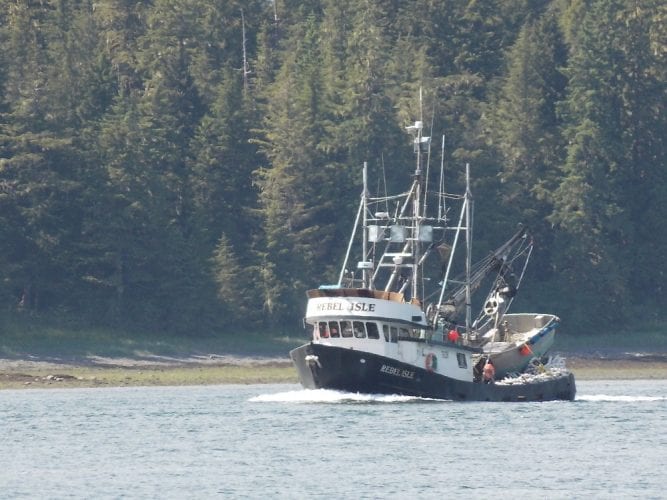 The overall commercial catch of pink salmon in Southeast Alaska is falling short of the pre-season forecast but it’s not as low as last year’s run. In fact, some parts of the panhandle have seen strong humpy catches.

The steam whistle blew August 11 at Icicle Seafoods’ Petersburg Fisheries plant, marking 100-thousand cases of canned pink salmon. It’s not something that happens every year and didn’t last year, according to PFI plant manager Patrick Wilson. He calls the season “nothing to write home about” but says the plant has been keeping busy canning pinks. Pinks are caught mainly by the region’s purse seine fleet and many are canned or frozen. PFI was the only cannery operating in Petersburg this year with Ocean Beauty opting to process frozen pinks at its plant in Excursion Inlet.

Regionwide, by the fourth week in August, the commercial catch had totaled nearly 24 million pinks, well below the Alaska Department of Fish and Game’s forecast going into the season.

“We did revise that forecast based on in-season information and right now I think we’re hoping to zero in on about 32 million,” said Dan Gray, the department’s regional salmon management coordinator. “The pre-season forecast was somewhere between 27 and 55 million with a point estimate for the forecast at 43 and it doesn’t look like we’re gonna get there.”

While it’s not living up to expectations, 2017’s harvest has already topped last year’s poor total of just over 18 million. If the season total hits 32 million, it would be close to the harvest from two years ago, the parents of this year’s pinks, and not far off long-term averages. Gray said the season’s going well in parts of the region and not so well in others.

“In the Ketchikan area not so well,” he said, adding, “we’re definitely in one of the probably lowest four or five harvests we’ve had. And as you move northward it improves. You get into the Sitka area and we’re probably in one of the top two or three. And Juneau’s been quite strong for harvest as well and escapement seems to be filling in although there are still a few holes.”

Last year’s catch was mainly from the southern panhandle. That’s flipped this year with the bulk of pinks caught in northern Southeast. An opening the third week of August saw a region-wide haul of 3.2 million pinks by nearly 260 purse seiners. The season peaks typically in early to mid August and catches are expected to start declining toward the end of the month. Processors are starting to send cannery workers home as the season winds down.

Gray said the average size for pinks is a little higher this season, probably over four pounds. The price has been up this year with companies paying a starting price of 30 cents a pound.