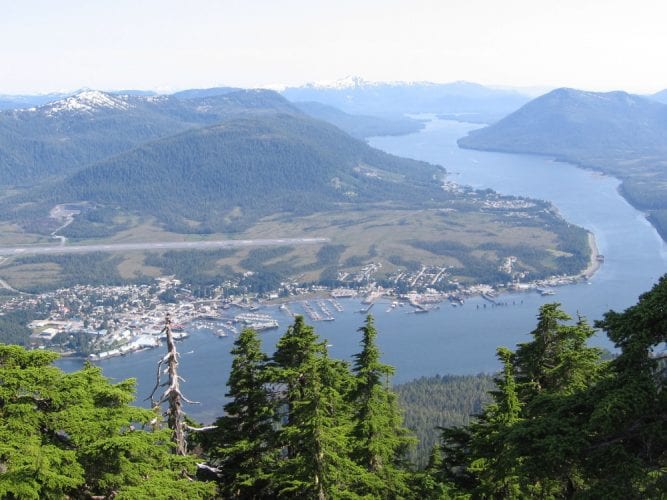 The hillside south of dowtown Petersburg will be transferred to the federal government as part of a land exchange with a deadline of May 2019. (KFSK file photo)

Legislation approved this year for a land swap in Southeast Alaska between the federal government and the Alaska Mental Health Trust has a two-year deadline. The swap will happen in two phases with more public involvement.

State and federal legislation passed this year authorizing the transfer of around 18-thousand acres of Mental Health Trust land to the federal government in exchange for about 20-thousand acres of the Tongass National Forest, near Ketchikan and on Prince of Wales Island. The Trust lands to be exchanged are near Ketchikan, Petersburg, Juneau, Wrangell, Sitka, Meyers Chuck and on Kuiu Island.

Wyn Menefee, the mental health trust land office’s deputy director, explained the work that has to happen in the next two years. “We have to work on the surveys, the appraisals and a host of other things, there’s studies that have to be done for the law and all that has to be taken care of before we can exchange the land,” he said. “But there’s deadlines that are in the federal bill which we are trying to make sure we can get done in time. The first phase gets completed within one year of passage of the federal bill and the second phase gets done in two years. So there’s a compressed amount of time with a lot to do and so we’re very busy at it.”

Under those deadlines, the first land will be exchanged by next May. That includes two trust land parcels totaling over 2500 acres on Signal Mountain and Minerva Mountain near Ketchikan swapped for 2400 acres of Tongass forest land near Naukati on Prince of Wales. Then the bulk of the land will change hands in the second phase with a deadline of May 2019.

Menefee said he expects timber sale offerings from the new mental health lands soon after the transfer. “The way that we’re looking at it is we don’t want to let a lot of time lapse so we will likely be working on efforts right up to try to get very concurrent with that first phase going through, so we can get a best interest decision running right after that and public comment period and then going to actual contracts after that,” he said. “So the idea is we know the timber industry needs the timber quickly and our intention is as soon as we get the land to be able to start proceeding along that line.”

Timber sales could be in the form of contracts negotiated between the land office and timber companies, or sales offered for companies to bid on. Menefee expects there will be public comment periods with a best interest decision on the overall exchange as well as decisions on sale of timber from those new mental health lands.

The lands going to the federal government include the steep hillside above Mitkof Highway south of downtown Petersburg. The Mitkof Highway Homeowners Association formed more than a decade ago to fight plans to log that hillside and advocate for a land exchange instead. Homeowner Ed Wood said the group will not disband until the deed for the land is actually signed over to the federal government.

“Feels pretty darn good right now to come this far and we can hopefully see the end of this,” Wood said. “I’m not sure what the final outcome’s gonna be here yet. We’re hopeful that it’s all gonna work. Congressional action and a presidential signature is pretty hard to turn your nose up, so I’m hoping the Trust will follow through and see it through.”

Wood is hoping the Mitkof lands are designated for a recreational use under Forest Service management. That’s a decision that’s also yet to come for all the new Tongass lands.

U.S. Forest Service spokesman Paul Robbins said that agency will be making decisions on land use designations for those parcels. “We wanna get as much input as possible we can from the diverse group of stakeholders that this all involves on those land use designations (LUDs),” Robbiins said. “So we’re gonna make sure that everybody gets to have their say on how these LUDs are assigned, although they do have to be assigned within the mandate of the act.”

The law requires the new Tongass lands are managed to protect their scenic value. That means six different land use options for the 10 parcels on six different ranger districts. Robbins says the agency will be creating a webpage about the options for those new lands and holding public meetings. Those could be as soon as September.

The law requires the federal government to make public the appraisals of the land to be swapped before each phase is completed. It also requires an exchange of equal value which could mean parcels are removed from the swap after the land is appraised.