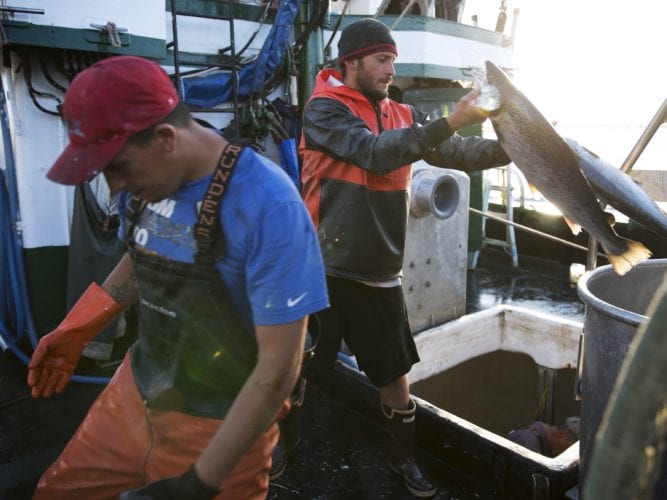 Aboard the fishing vessel Marathon, Nathan Cultee, right, and Nicholas Cooke, left, unload 16 farm-raised Atlantic salmon into a container after a day of fishing on Tuesday in Bellingham, Wash.
KUOW, Megan Farmer

Commercial fishing boats are now scrambling to catch as many Atlantic salmon as they can near Puget Sound’s Cypress Island.

Fishermen reported thousands of the non-native fish jumping in the water or washing ashore.

Courtney Flatt of Earthfix and Northwest Public Radio reports that the fish farm’s net pen broke after an anchor pulled loose and metal walkways twisted about. Onlookers said it looked like hurricane debris.

Washington Department of Fish and Wildlife officials blamed the structure failure on high tides caused by the eclipse — but tidal waters had been higher in July.

Kurt Beardslee is the director of Wild Fish Conservancy Northwest. He calls the escapement an “environmental nightmare. He says the Atlantic salmon bring with them pollution, virus and parasite amplification. All that harms Pacific salmon and the waters of Washington.

Lummi Nation fishermen in Washington worry that endangered chinook salmon could wind up as bycatch. The tribe declared a state of emergency over the escaped salmon on Thursday. The tribe’s chair said the spill must be addressed immediately by all levels of government.

Officials from the fish farm did not return requests for comment.