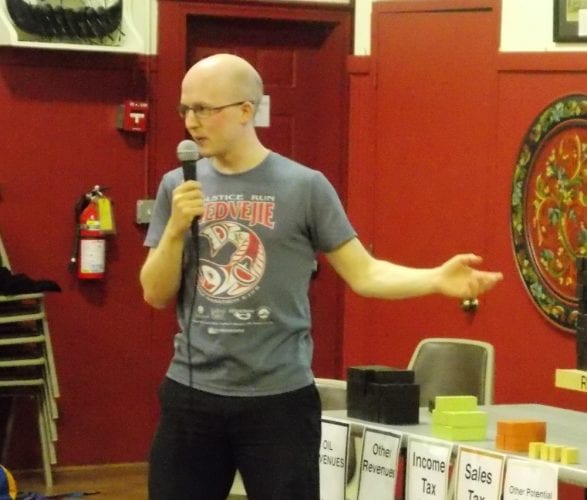 Sitka Democrat Jonathan Kreiss-Tomkins presented options for the state budget to a gathering of local residents at the Sons of Norway Hall in January of 2016. Since then the state legislature has not agreed on any of the new revenue sources to make up the budget deficit. (KFSK file photo)

Petersburg’s representative in the Alaska House says the legislature made no progress toward a fiscal fix for the state of Alaska in a regular session and multiple special sessions this year.

Sitka Democrat Jonathan Kreiss-Tomkins visited with constituents in Petersburg in late August and had this appraisal of what went on in the state capital this year: “I mean government didn’t shut down so if that’s a measure of success that’s a sad measure of success but I guess it was a successful session,” Kreiss-Tomkins said during an interview at KFSK-FM. “It took far longer than it should’ve. There were sort of a lot of prolonged stretches of gridlock and impasse and no, no forward progress on putting Alaska’s fiscal future on a sustainable track and basically balancing our budget.”

The Walker administration says state savings have one year left at current spending levels and will be down to 2 billion dollars by next July. The governor could call legislators back into another special session this fall to try again. So with the end of Alaska’s savings next year should Alaskans expect a shutdown of state government?

“I sure hope not,” Kreiss-Tomkins said. ‘I will say this. I am looking at a citizen’s initiative to address at least what I perceive some of the systemic failings and failures of the legislature as a way to try to ensure that what has been happening the last few years does not happen again, because I think I’ve said before and will certainly say now, what’s happening is unacceptable.”

The Associated Press reported this week that the proposed ballot initiative would stop per diem payments to lawmakers if they’re late passing a state budget. It would also restrict foreign travel and make changes to what’s allowed for conflicts of interest for legislators as well as gifts from lobbyists.

Kreiss-Tomkins has filed to run for re-election next year. If he’s re-elected, it would be his fourth term representing communities in central Southeast Alaska.

“I care about the future of the state which is why I ran in the first place and I continue to feel that way,” Kreiss-Tomkins said. “I also think this bi-partisan coalition in the House is great for Alaska. It’s particularly great for coastal Alaska. I worked really hard in a lot of ways to bring this coalition into being along with a lot of other people and I like to see it stick around and I certainly wanna do my part to make sure that we benefit from that sort of bi-partisan set aside the extreme issues kind of governance which I think is good for Alaska.”

The young legislator got some wider recognition this summer in an online magazine article that labled him “the Alaskan who could lead progressives out of the wilderness.” The article highlighted his work across party lines and role in helping form the House majority coalition.