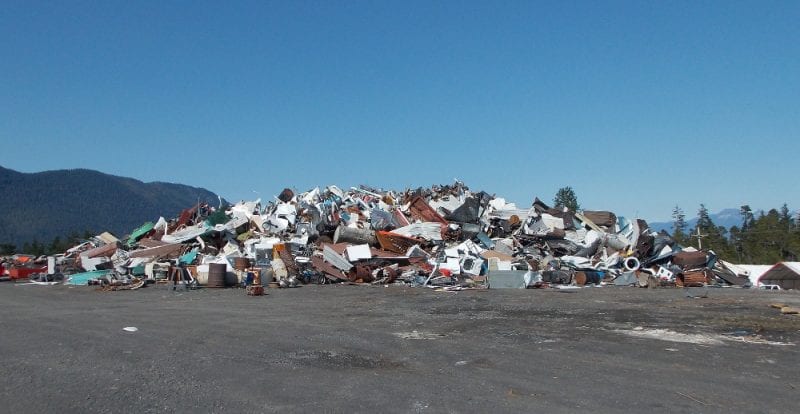 Scrap metal and junk cars are piled up at Petersburg’s landfill this month. (Joe Viechnicki/KFSK)

Petersburg’s borough assembly Tuesday approved a preliminary agreement for shipping out recycled metal and junked vehicles. The agreement is with the giant garbage and recycling company Waste Management and is the first step to actually sending collected scrap metal and cars out of town.

The borough’s public works director Karl Hagerman said the company is waiting until it can sell Petersburg’s metal for $200 a ton. Waste Management would send a barge from Seattle and the collect recycled materials.

“That 200 dollars a ton will cover most of the expenses if not all the expenses and provide some revenue to the communities for this initial cleanup,” Hagerman explained. “Anything less than that and it’s pretty close and we’re looking at spending money to get rid of our metal, which I don’t recommend doing. We should sit on it until we can get some money back for it.”

Two other Southeast municipalities, Thorne Bay and Klawock, also may take part in the metal shipping. The communities are part of a regional group called the Southeast Alaska Solid Waste Authority. The agreement approved by Petersburg’s assembly does not set the terms and price for the service. That will be an assembly decision for a later date, a part of this agreement called exhibit A.

Hagerman explained that he hoped to see some money back for the metal. “I would probably not recommend to the assembly that we enter into any final agreement, any appendix A, that has us paying per ton,” he said. “We’ve got potentially 1200-1500 tons. So even at $10 a ton if we pay to get that out of here, it adds up pretty quickly. If we can make $10 a ton, that’s great.”

Waste Management bills itself as the largest environmental solutions provider in North Amercia with more than 21 million municipal, commercial and industrial customers in the U.S. and Canada.

Petersburg is offering free drop off of metal and junk cars at its landfill through the end of October for both residential and commercial customers. That could boost the amount shipped out of town as well as the money the borough could make on the deal. The community used to enjoy free drop off days at the dump. The last one offered at the landfill was in 2003. Hagerman said that year the community dropped off 191,000 pounds of metal in one day.

The vote was 4-0 to approve that agreement with Waste Management. Bob Lynn, Jeff Meucci and Nancy Strand were not at the meeting. The vote was also 4-0 to approve a bid award for just under 43-thousand dollars to Reid Brothers Construction for crushing recycled asphalt. The borough’s public works department hopes to use that material to resurface some local gravel roads.