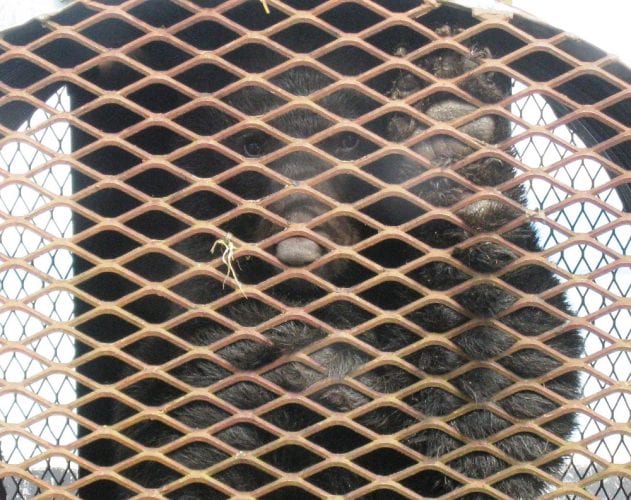 A black bear was captured near early this month and moved to Farragut Bay on the mainland north of Petersburg. (Photo courtesy of ADFG)

The Alaska Department of Fish and Game has trapped and moved two black bears that have been looking for an easy lunch and getting into garbage cans in Petersburg this summer.
Petersburg’s Police Department has been fielding calls about nuisance bears around town. The borough is asking residents to make sure household trash is secure until it is picked up by the garbage truck.

Fish and Game wildlife biologist Rich Lowell said he received a request from the police department to place a live-bear trap near Kiseno Street not far from downtown Petersburg on Saturday, September 2nd.

“By the following morning we had captured a bear, about a 200-pound black bear, which we then loaded on the landing craft and moved up to the north side of Farragut Bay,” Lowell said.

Farragut Bay is on the mainland north of Petersburg. It’s the second bear to be trapped and moved by Fish and Game. A slightly smaller black bear was relocated in August from the neighborhood near the Hammer and Wikan shopping center. That one was moved to the mainland in Thomas Bay. Both bears are probably between two and four years old.

Lowell said he wouldn’t be surprised if there are other problem bears eating from garbage cans and other food at homes in town. He’s also heard reports from Wrangell Avenue, Lake and Galveston streets. He thinks a number of factors could be causing an increase in bear problems this year.

“It can be you know a poor berry crop,” he said. “It can be you know reduced fish runs, fish not being as accessible and abundant as they are in previous years. Coming off of two to three years of very little bear activity, citizens have gotten complacent about securing their garbage. So all of those things add up to more bear problems than we’ve seen in the past.”

The department also relocated nuisance bears in 2012 and 2006. There was also a major relocation effort in 1994 and others were killed here between 1998 and 2000. In some prior efforts the bears were released on the south end of Mitkof Island but were able to find their way back to the garbage cans of Petersburg in about a week. Lowell is hoping that releasing the bears this year on the mainland will make that return too difficult.

He also sounds a word of caution with the start of moose hunting season on September 15. “Obviously some people will be successful and have meat hanging in town and you know it’s important that the hides, bones and butcher scraps be properly disposed of cause often times they get dumped close to town and it just further contributes to the bear problem by drawing bears into town that then discover garbage cans and so we need to be particularly careful as we head into not just moose season but people will be more actively deer hunting and stuff like that.”

Lowell recommends disposing of hide, bones and scraps by dropping them into the water from a boat if possible. Or big game remains can be dropped off at the landfill, kept in the freezer until they’re put in the garbage can for collection or disposed of on the island far away from where people are living. Lowell also reports continued bear problems at homes along Mitkof Highway where people are raising chickens. In those situations, he says electric fences should be put up around chicken coops and food storage areas.