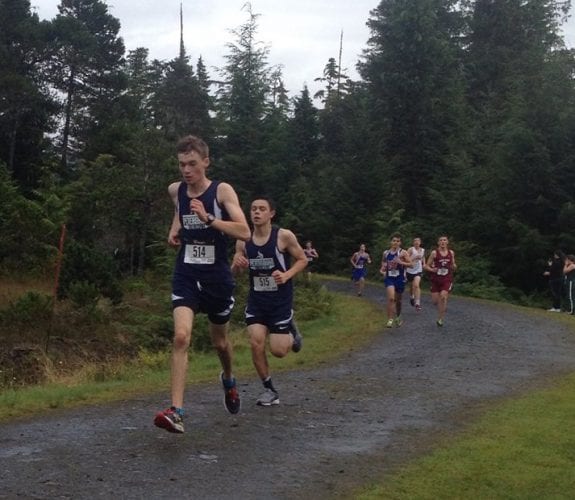 Petersburg High School girls cross country came in third behind the two Juneau high schools this weekend at a meet in Wrangell. The Petersburg boys team was fifth.
In the girls race, Juneau-Douglas took the top spot with three of the top four runners across the finish line. Thunder Mountain beat out Petersburg for second place by just two points.

Freshman Maia Cowan and senior Julia Murph were fifth and sixth. It was a personal record for Murph. Kendra Coonrad also set a personal record and took ninth. Melanie Chase was 14th, Erin Pfundt came in 22nd and Eva Lenhard was 24th. 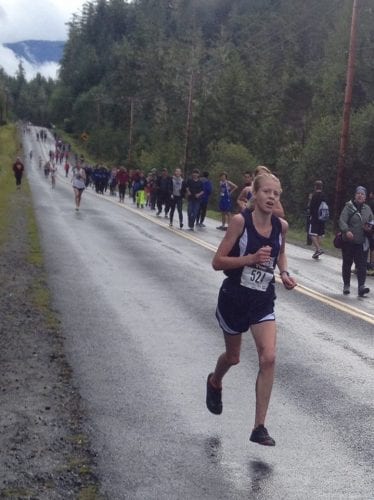 “The course over there was on the golf course and they chose a really nice way to do this year, we started down on spur road, went around the golf course twice and so it was really fund for the kids I think because it was, you were able to see the crowd a couple of times and kinda helps with that excitement, get their adrenalin going, get the support from their families and friends,” Thompson said. “The trail was in really good shape and I think we had some really good fast runs.”

Thompson says some of the parents of the runners made the trip to Wrangell to see the teams run at the closest thing to a home meet for Petersburg this season.

Juneau Douglas also took the top spot in the boys race with Sitka not far behind. Ketchikan took third and Thunder Mountain was fourth.

Brennan Skeek was Petersburg’s top runner, coming in 15th and setting a personal record with a time of 18 minutes and 27 seconds. Kole Sperl was 22nd and Tolin (TOE-lynn) Eddy was 23rd. Thomas Durkin was 33rd and Koren Sperl was 38th.

Thompson said his runners continue to set PRs, or personal records, along with some of their best times for this season.

“Julia Murph, she’s a senior and so she’s got a PR now in almost the end of her career which is great and Kendra Coonrad who’s just a freshman, she’s still getting PRs week to week. Melanie Chase had a season best record. Eva Lenhard had a personal best. Avery Skeek had a season best. And then Maddy Parker, she had her best race of the year by a couple minutes. She just ran really well. She ran a 26:34. Really nice to see her kinda coming back into form as she used to be one of our top runners. And then Lydia Martin had a personal best too over there. That was on the girls side. Boys side, some really great runs. Brennan, 18:27, kindof led the group as a freshman. And the Kole did well. Tolin had a PR. Thomas, a sophomore, PR. And Noah Sullivan he went sub-20 and it was really nice to hear him cause he said he’s been waiting to join that group of sub-20 5k kids. So really nice races by boys and girls.”