Petersburg votes on ATV use on streets 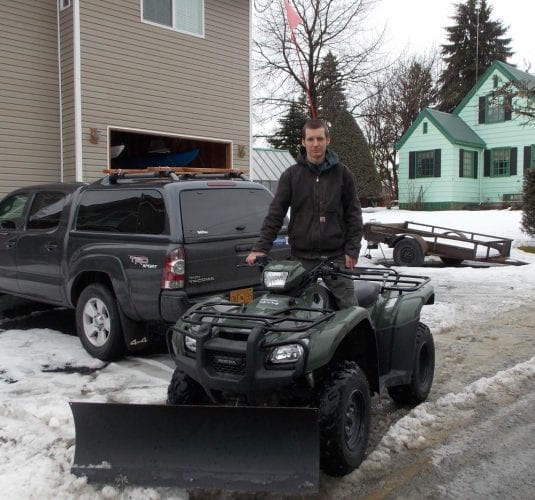 Off-road vehicle owners in Petersburg could drive them on streets on Mitkof Island if voters approve that measure October 3rd. The ballot measure would require a new borough registration sticker for all ATVs used on the island as well as a number of other requirements in response to safety concerns.

Petersburg’s proposed ATV ordinance was based on similar law used in Thorne Bay on Prince of Wales Island but it was changed drastically since proponent Richard Burke began drafting language. Burke wants to be able to use his ATV for short errands and thinks the practice would free up some parking spots downtown.

“Kept on looking out my door at my ATV I paid seven thousand dollars for and I can’t ride it anywhere in town and it’s kinda frustrating,” Burke said during a radio call in show on KFSK-FM this month. “I can’t even legally plow snow with it.”

Burke circulated a petition to get the issue on Petersburg’s ballot last spring. The proposed law would include off-highway vehicles but not snow machines. He also says the off-road vehicles are cheaper to own and insure than a car or truck.

On street use would not be allowed on higher speed state-owned roads South Nordic, Haugen Drive and Mitkof Highway other than to cross those roads. But on other streets ATVs and other off-highway vehicles could be driven on the right hand side of the road.

Drivers would have to have a drivers license, proof of insurance for that ATV and either a proof of completing an online safety course or motorcycle license. A two-year registration sticker would be sold by the borough for $100. ATV drivers could be ticketed and fined for violating any of the requirements.

Opponents of the change are concerned with safety of allowing off-road vehicles on streets. Borough assembly member Nancy Strand thinks it will be difficult for motorists to see the smaller vehicles.

“If you’re sitting in the left side of your car driving and the little old vehicle is on the right side, if you’re in car that’s low to the ground you have more chance of seeing ‘em,” Strand said. “But if you’re in a car that’s up a little, one that an old person can get in and out of with ease, your visibility is more restricted.”

Petersburg’s proposed law would also require a flag on the back of an ATV to make it easier for other drivers to see.

While technically it’s illegal to plow snow using an ATV at the moment, police in Petersburg do not enforce that law. Police chief Kelly Swihart says if the measure is approved by voters his department would be enforcing ATV violations within the old city limits and not on the rest of Mitkof Island. He also cautioned against driving off-road vehicles at high speed.

“A lot of these off-highway tires cause vehicles to act differently when they’re on the pavement,” Swihart said. “Those characteristics are magnified with speed so it’s going to be important that if this goes through that people do watch their speed. I think that’s going to be where we could have the primary issue with safety.”

Swihart notes that if the local measure is approved by voters, drivers will still have to comply with state law on ATV use.

On a radio call-in show, callers were split on the issue, with concerns over safety and ATV use on fragile muskegs on one side, with others agreeing that ATV use would help with downtown parking problems and make it easier to live here.