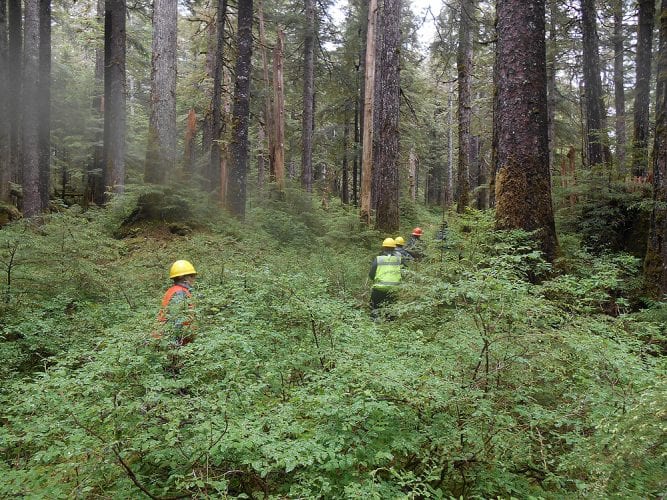 A Ketchikan company has been awarded a $2.6-million sale of second-growth timber on an island in Southeast Alaska. The state of Alaska prepared and awarded the contract for logging on federal land on Kosciusko Island under an agreement with the federal government.

The sale is the first of its kind in Alaska under what’s called a good neighbor authority agreement. That allows the state’s Division of Forestry to handle sale preparation, administration and oversight for the logging on the Tongass National Forest. The land is near the Southeast community of Edna Bay, west of northern Prince of Wales Island.

“The benefit for the state government is helping the Forest Service with capacity issues and actually getting timber sales prepared quicker and out for sale,” explained Chris Maisch, state forester and director of the Alaska Division of Forestry. “Of course Southeast Alaska has been struggling with the lack of timber volume off federal land and so this is a way for us to help get that volume out which of course helps the economy of Southeast, the communities and people that depend on that for employment.”

Maisch said the Division of Forestry has been able to find the personnel to do the work. “Because of the state’s budget problems we’ve had some cutbacks in my division, fairly steep cutbacks, about 42 percent over three fiscal years in my forest management side of my division and so I’ve actually been able to hire some employees back as temporary employees that previously been laid off.”

Staff in the division’s Haines office have been working on the project as well as newly hired employees on Prince of Wales Island. Maisch expects the state to be working on other agreements with the Forest Service for similar sales elsewhere on the Tongass in the future.

Forest Service spokesman Paul Robbins said while all of the timber harvest will take place on national forest land, access will be across state property. “The Kosciusko sale will be using state lands and roads as well as a log transfer facility on Division of Forestry land,” he said. “So even though all of the lands are federal, in order to harvest the sale and put the sale out there, we needed to use division of forestry lands. So it just made sense to work alongside them on this sale.”

The sale will mean harvest of 29 million board feet of Sitka spruce and hemlock. Some of the money from the sale will reimburse the state for its costs.

The work-sharing agreement allows Forest Service staff to focus on other projects. The 2014 Farm Bill authorized Forest Service use of such contracts with all 50 states. The federal agency completed an environmental assessment on this project in 2015. Since the logging is planned on federal lands, it has to be done under standards and guidelines of the forest plan, not less stringent standards under state law.

The Tongass is transitioning away from harvest of old growth to focus on younger trees that have grown back after logging in the mid-to-late 1900s. In this project, harvest is planned for young-growth trees only, all around 60-75 years old. Old-growth trees originally included in the project were dropped from the final plan. The state has applied for and received approval to allow export of all of the trees cut.

The company awarded the logging contract is Alcan Timber of Ketchikan. Brian Brown, a partner in the company, said Alcan is already logging on Kosciusko and sees it as a good opportunity.

“It kinda speaks for itself,” Brown said. “It’s a large amount of volume for the recent history of what we’ve seen in the Tongass, so you know that’s good. It is second growth which allows us to do some things that we can’t do in old growth with mechanization and things like that. Overall we are looking forward to operating this timber sale.”

Brown said there’s no market for the second-growth timber in Alaska. But there’s a good market at mills overseas designed to handle the younger trees.

Regional environmental groups are glad the old-growth logging was dropped from the plan, but don’t like the export allowance because it means processing work is done elsewhere and not in Alaska. Other concerns are about the impact on wildlife habitat even in the previously logged areas.

Larry Edwards is president of a regional organization now called the Alaska Rainforest Defenders, formerly known as the Greater Southeast Alaska Conservation Community. That group objected to the 2015 decision by the Forest Service to proceed with the project.

“Western Kosciusko’s just been hammered and will continue to be and this second growth that the Forest Service has remaining on west Kosciusko should really be allowed to go back to old growth just to help ameliorate all these excessive impacts on that island,” Edwards said.

Another young-growth project on Gravina Island near Ketchikan could be next up for the collaboration between the state and federal governments.

View the agreements between the state of Alaska and the U.S. Forest Service here and here.