A Petersburg resident has been recognized by the King of Norway for her dedication to promoting relations between Norway and the U.S. The Ambassador of Norway to the United States was in Petersburg last week to hand out the Medal of St. Olav. KFSK’s Angela Denning reports:

A handful of Petersburg residents are gathered at Glo Wollen’s beach front home to have a cook out. Wollen is the current President of the local Sons of Norway lodge and she’s also the town’s Harbor Master.

At this point, she has no idea she’s getting an award. As far as Wollen’s concerned, she’s just hosting important visitors. The last time the Norwegian Ambassador visited Petersburg for the Little Norway Festival in 2016 Wollen also hosted a BBQ at her place.

“We’re hosting the Ambassador of Norway to the United States of America here and his assistant and our Norwegian consul that is located up in Anchorage,” Wollen said. “So, we’re having a little Alaskan party. And we also have the Lt. Governor of Alaska as well.” 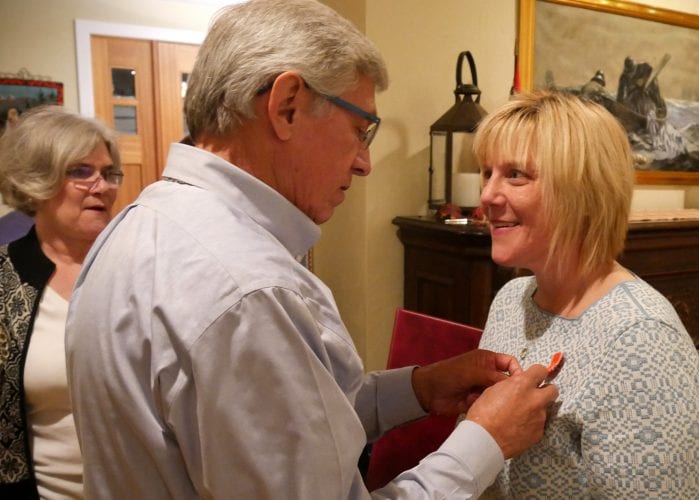 Alaska Lt. Governor, Byron Mallot, looks at Glo Wollen’s new Medal of St. Olav. She was given the medal by Norway’s Ambassador to the United States,
Sept. 28 in Petersburg.
(Photo by Angela Denning/KFSK)

People are socializing in the back yard while local black cod, salmon, and shrimp are grilled over a fire.

Soon, people are called around the deck because Ambassador Kåre Aas wants to publicly thank Wollen for the hospitality. He says he is also here for another reason.

“His majesty King Harald V has told me to come here,” Aas said. “When his majesty wants to honor a person or persons he gives them the Medal of St. Olav.”

The medal is round and silver and hangs from a red, blue and white ribbon. Wollen also receives a diploma.

Aas says the medal is given to Norwegians or foreigners who have been working hard to strengthen the relationship between Norway and another country, in this case, the US. He says he nominated Wollen for the medal. 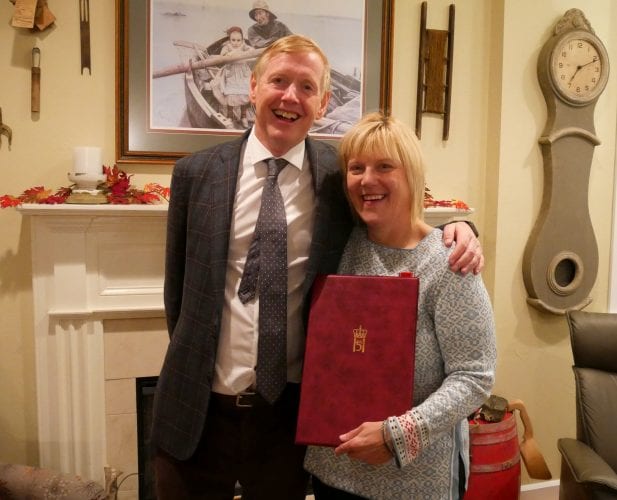 Ambassador of Norway to the United States, Kare Aas, and Glo Wollen pose for a photo after she was award the Medal of St. Olav, Sept. 28. (Photo by Angela Denning/KFSK)

“Since you were born–your mother is here–you grew up in a fishing family, and your father he told you a lot about values, Norwegian’s values,” Aas said. “Your mother, she told you about how to interact with other persons, how to sew and how to cook.”

After the award is given, Wollen receives hugs from friends and poses for photos.

Aas says the king’s medals are seldom given out, maybe one a year to Americans.

“It’s really a recognition of what Glo has been doing in working and promoting and maintaining Norwegian values in Alaska,” Aas said. “But also really emphasizing what many Norwegian Americans think about their relationship to Norway historically, politically but also culturally. And his majesty, he really honors those who are really advocating [for] our two countries.” 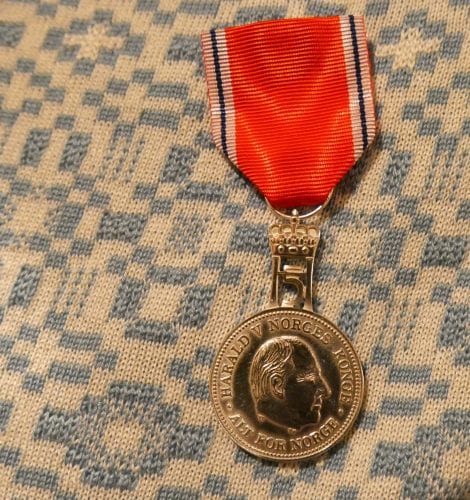 Petersburg resident, Glo Wollen, received this Medal of St. Olav for her work to strengthen the relationship between Norway and the U.S. (Photo by Angela Denning/KFSK)

Aas says that based on this recognition he believes that when Wollen visits Norway–which she hopes to do–she will be able to meet the King of Norway himself.

Wollen herself didn’t give any speech after receiving the award but besides wearing a new medal on her chest, she also had a beaming smile on her face.