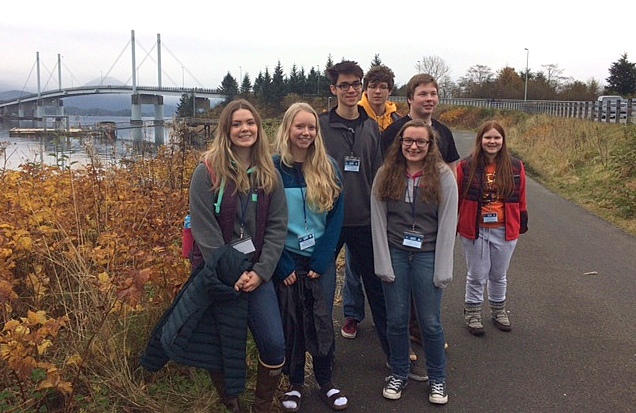 Every November, Petersburg High School’s Science Bowl team travels to Sitka for Whalefest. There, the science students attend lectures on topics like whales and oceanography. They also participate in a science trivia scrimmage with other teams from the Southeast region.

The Petersburg team took first place this year as they did last year at the Whalefest Quiz Bowl. But senior Helen Martin says it meant more this time. There were nine teams this year, a lot more than before.

“So, it was a lot more competitive and I think that was good for us to practice and see how well we work with each other,” Martin said.

Seven Petersburg students made up the team, five seniors and two freshman. Marissa Nilsen was another senior.

“Scrimmages are basically just for fun,” Nilsen said. “Of course, there’s a competition aspect to it but everyone just enjoys being there and enjoys doing it and it’s cool that we won and it’s cool for me because I remember my freshman year when I started I never thought that we would win. (laughs) Just because I didn’t really know what I was getting into. I thought tsunami bowl was a competitive sushi making club when I was in eighth grade.”

Jaden Perry is one of the freshman on the team. She says Quiz Bowl was her favorite part of Whalefest in Sitka because it was just a lot of fun.

“Just being able to compete against other people, I guess,” Perry said. “Because when we’d practice Quiz Bowl here it’d juts be against us so. . .it’s the fresh competition.”

The main yearly focus of the science bowl team is the Alaska Tsunami Bowl state competition in February in Seward, which is part of the National Science Bowl. This year the overall topic is “Extreme Weather Events” and how the ocean is a part of that. The seniors on Petersburg’s team have decided to focus on wind. They’ll be researching wind in Petersburg and how it affects the economy.

Senior, Gabe Torres, says a big part of the project is defining what extreme weather is on different scales.

“What extreme is locally, what it is regionally and what it is globally,” Torres said.

He says they’ve considered different ways of doing that and are coming up with some possibilities.

“There’s the statistical way and the more real world way to define extreme,” Torres said. “That’s kind of what we’re doing right now is focusing on ways we can define extreme and find data to manipulate and show trends.”

Denning: “Because it might very well be different in Petersburg than in other parts of the world.”

The three students on the team who are freshman are working on their own paper topic on extreme rain events. They’re focusing on how the ocean affects precipitation and how that can affect extreme weather.

As part of the team’s study of wind and rain they are asking the public to weigh in through a survey. Senior Anders Christensen says they will use the data they gather in their research.

Christensen: “It’s just asking what most people have seen over the duration of their lifetimes living in Petersburg to just try to get some first-hand data.”

Martin: “Plus it’s hard to find this information just on line so just asking around locally is really helpful.”

Martin and four other seniors on the team have been competing in the program for four years. One of the coaches, Joni Johnson, says that makes it a special year for the Science Bowl.

“Having five seniors is pretty phenomenal, especially since they’ve been part of this since they were freshman. And so it’s been neat to see how they’ve grown,” Johnson said. “You know, you come into Science Bowl and really, your knowledge, it’s intimidating because you don’t know much of anything or you don’t feel like you do and then year after year, just that growth is pretty cool.”

The Petersburg science team will continue working on their research projects and plan to practice their presentations in front of the public before state competition in February.