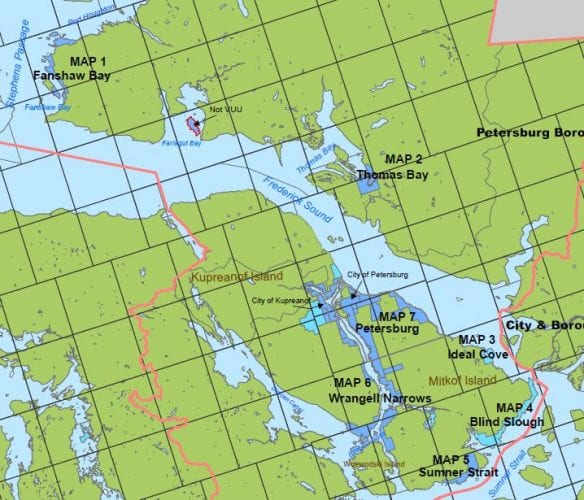 Most of the lands shown in blue are available for the Petersburg borough to select following the signing of senate bill 28.

One of only 26 bills passed by the legislature this year, senate bill 28 got the governor’s signature last week. It increases a state land allotment for the Petersburg borough to over 14,000 acres.

Just a couple dozen people turned out to witness a big moment in the short history of the new borough, formed nearly five years ago. Governor Bill Walker was on hand to sign the legislation that passed in May.

“You know my background is local government,” Walker said. “So anything that I can do I see come through that involves helping local government do a better job of what they’re doing, more land, anything, I’m very excited about that.”

One of Petersburg’s arguments for the land increase was that the property will help the municipal government become more self-sufficient. 96 percent of the borough is untaxable National Forest Land, with other small percentages already granted to the Alaska Mental Health Trust, Southeast state forest and the University along with Goldbelt, Juneau’s urban Native corporation. Only three tenths of a percent is in private hands, generating property tax for the borough but this bill could increase that.

Sam Bunge, a retired land surveyor for the U.S. Forest Service, served on the committee charged with choosing which lands to select. That committee prioritized a shorter list but will have to go back and add to their choices.

“Well we were hopeful but no we didn’t quite imagine it would happen so smoothly and so soon,” Bunge said. “But yeah this is nice. There’s a lot of interesting state parcels out there for the borough to select.”

As for land that piques his interest, Bunge mentioned some on Mitkof Island about 10 miles south of Petersburg. “I’m looking at Falls Creek,” he said. “There’s two half sections down there along the creek and the road that are state, unappropriated land, fairly level, got the creek in it, road access, looks ideal for future development.”

The committee’s shorter list, totaling 1,321 acres, focused on economic development land, for instance several rock pits and waterfront parcels near existing boat ramps or other facilities. Those parcels are at Cape Fanshaw and Thomas Bay on the mainland, on southern Mitkof Island near little Blind Slough and around Woodpecker Cove as well as eastern Mitkof at Frederick Point. Other top choices are in Kupreanof Island’s Duncan Canal and at Frederick Point on Mitkof Island.

Sitka Democrat Jonathan Kreiss-Tomkins sponsored the House version of the bill and is thrilled to see it become law. “It’s a big win for Petersburg,” Kreiss-Tomkins said. “It was a good example of collaboration and getting through I would argue common sense legislation in a year that didn’t see a lot of successes on that front.”

With belt tightening at the local level, the additional state land can help. Although borough manager Steve Giesbrecht cautioned it’s help that will come many years down the road.

“You know a lot of this land it’s long-term propositions,” Giesbrecht said. “You know so it can’t immediately be turned into cash to run the borough but it is clearly an asset that can be used for development for quality of life things and future revenue potential streams for the borough, so again, not right away but over time this is pretty valuable.”

And Petersburg’s mayor Mark Jensen noted that Petersburg residents have some historic ties to some of the parcels. “You know there some areas like Fanshaw, Cape Fanshaw area that’s kinda historical for Petersburg, used to be a fox farm there and a post office. In fact my grandmother Willie worked there when my mom and Jean Thynes her sister were around their 18ish years so. Yeah, I don’t know that’s a pretty special place.”

So did the governor have any heartburn increasing the land allotment for Petersburg while the state struggles under huge budget deficits? Doesn’t sound like it. “Really Petersburg is increasing the opportunities for Petersburg,” Walker said when asked that question. “So the good work by Senator Stedman, Jonathan Kreiss-Tomkins to make this happen. I, you know, one of my jobs is to make sure that everybody has every tool to make their area successful and so if that means land being transferred to them that they’re entitled to, I’m only too happy to do that. And again I don’t wanna take too much credit myself for this because a lot of the work was obviously done by Senator Stedman and Representative Jonathan Kreiss-Tomkins. I’m just happy to be part of it. It’s certainly a bill that I supported and one that I was very, very happy to sign and very happy to sign it in Petersburg.”

Petersburg’s community and economic development director Liz Cabrera and the borough’s lobbyist in Juneau Ray Matiashowski worked to get the bill through the legislature. Both were on hand for the signing. The actual transfer of parcels from the Department of Natural Resources to the borough is expected to take years.