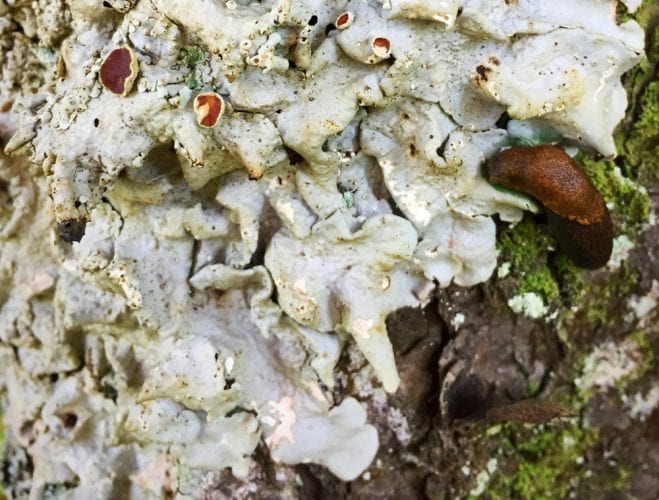 Scientists have learned that a kind of lichen found in Southeast Alaska is a distinct sub-species that has evolved from the lichen of the same name found elsewhere in the world. This particular lichen has only been found in a small part of the Tongass National Forest. It also has received a new name, honoring the Tlingit people of the area.

The lichen was first discovered by a U.S. Forest Service ecologist on the Sukoi Islands near Petersburg in 1992, the first discovery of it in North America. At the time though, it was thought to be something else.

“We sent it to Japan and the Japanese lichenologist said Oh yeah, this is Lobaria japonica,” said Karen Dillman of Petersburg, an ecologist with the Forest Service on the Tongass National Forest.

“And then he lost the sample,” Dillman said, adding, “So it sat in the question of what is it for many many years.”

Turns out it’s not quite the same as a similar species in Japan. Another scientist classified the find as a species also found in Europe.

“So what happened was a Norwegian lichenologist came to the Tongass in the early 2000s and he found it over near Sitka, on an outer coast island. He called it Lobaria amplissima from Europe,” Dillman explained. “So therefore he published it as Lobaria amplissima and that’s what we’ve been calling it forever, for probably 15 years.”

Turns out its not quite the same as the European species either. Dillman, along with Chiska Derr of Juneau who made the original find back in 1992, and a third scientist Carolina Cornejo of Switzerland, studied the lichen, comparing its chemical composition and DNA.

“And the DNA clearly shows that it is distinct from the European populations, however it’s not, timewise, it needs more time, in evolutionary time what is that, is it a hundred more years is it a thousand years. But it is already different genetically than the European. Therefore it had enough statistically significant differences to create a sub-species of it,” Dillman said.

It’s not yet its own species, but that’s expected to happen over time. The findings were published in November in the European scientific journal the Lichenologist.

Even on the Tongass this newly-described sub-species is rare. Dillman said it’s only been found in about 20 locations despite over two decades of searching. Besides the Sukoi islands and McDonald Island in Frederick Sound near Petersburg, it’s also been found once on southern Mitkof Island, other small islands in Sumner Strait closer to Wrangell and in some wilderness areas on the outer coast. The scientists wanted to have an indigenous name for this new sub-species and worked with the Petersburg Indian Association for suggestions.

“Previously to this work it was called Lobaria amplissima which is a genus that’s very common here, Lobaria,” Dillman said. “Now the genus is Ricasolia. The species is amplissima and the subspecies is sheiyi which is the Tlingit name for Sitka spruce. This lichen lives on the beach fringe areas of the Tongass and generally is growing on Sitka spruce.”

Specifically this lichen is only found at low elevations and on living trees on the fringe of beaches. Dillman said the habitat it likes is vulnerable to air pollution, wind damage, storm flooding and erosion, threats that are expected to worsen with climate change. It’s also part of the forest that is the easiest access for logging.
The lichen is already on the sensitive species list for the Tongass National Forest. This list is for plants or animals on the decline or facing a loss of habitat. The Forest Service considers impacts from logging and other management on the forest for those species.

So what does it look like? “So it has like two sides like a piece of lettuce,” Dillman explained. “But this one has, the lobes are very, we call ‘em lobes instead of like petals or leaves, the lobes are really, they almost look like melted wax, so really very textured. When it’s wet it’s this beautiful sagey green and when it’s dry it’s almost white.”

Lichens are a form of fungi. Some are important to wildlife as food or nests, while others leach nitrogen into the forest fertilizing trees and other plants over time. Lichens are very sensitive to environmental conditions and climate and in many parts of the world are studied for air quality and climate change.
Like all good discoveries, this one has generated more questions. Namely how did it get here?

“This is the fascinating part too,” Dillman said. “It’s not in the Lower 48. It’s not in Canada. It’s only here. So this lichen that we’re looking at here does not occur anywhere else like this. So where did it come from? Did it just come the European branch and it just blew over the poles and eventually landed here when we started getting more trees? And then it just evolved into its own sub-species and eventually species.”

Dillman said those are questions for someone else to answer in the future. Meanwhile she expects scientists will continue to look for and find new lichen species in the rain forest of Southeast Alaska.