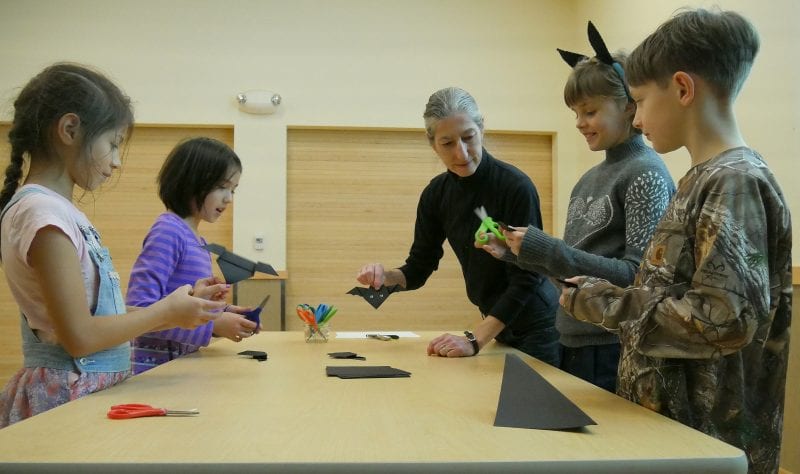 Librarian and bat volunteer, Chris Weiss, instructs students on how to make origami bats at the library. (Photo by Angela Denning/KFSK)

Last month at the Petersburg Public Library children celebrated bats an animal that can sometimes be seen at night on the island. There were bat art projects and bat games at the local bat event. KFSK’s Angela Denning reports.


Over a dozen kids are sitting on the floor listening to bat calls that have been slowed down enough for the human ear to hear.

Sunny Rice leads the discussion. She’s with the Marine Advisory Program in Petersburg.

She explains that bats hear like some whales do through echolocation.

The students gather in a circle for a game of tag. Rice chooses a few of them to play the part of bats, a few to play moths and the rest of them stand still as trees. The bats are blind folded and must clap their hands one time. In response, the moths clap twice sending back their location to the bats.

Four distinct species of bats have been identified on Petersburg’s Mitkof Island. Five species have been found in Southeast. All of them are insect eaters, each one consuming up to 5,000 insects a night.

Many of the kids are fascinated with bats.

As 10-year-old Alex Holmgrain explains there are a lot of interesting bits of trivia about them.

“They’re the only mammals that can fly,” he said. 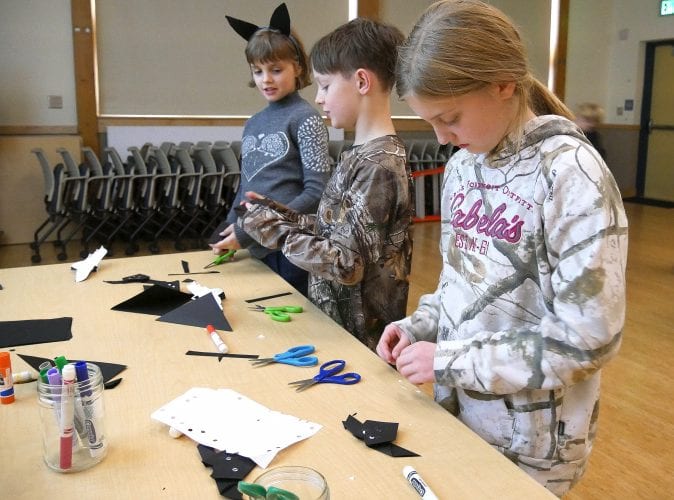 7-year-old Connor Cummins says he knows a lot about bats and he readily shares what he’s learned.

“The vampire bat sucks blood from some cows and chickens and stuff like that so they’re not so scary,” Cummins said. “And some eat fruit and some actually eat just insects. And a lot of people think that they’re swooping down to kind of scramble their hair a lot. And try to suck you’re blood but they’re actually just catching insects you can’t see.”

Students also make folded paper bat airplanes. 7-year-old Lola Slaven is testing out her bat-plane to see what adjustments she might want to make to it.

9-year-old Alisa Tolkachova has her own reasons for liking bats.

“I like bats because they kind of look like cats and I love cats,” Tolkachova said. “And they look like flying cats or mice or hamsters.”

But Rice is quick to explain that bats are not related to rodents at all. In fact, they’re more closely related to primates than to mice. With this new information the students leave the library with their paper bats in hand and new knowledge that bats play an important role of the local ecosystem.