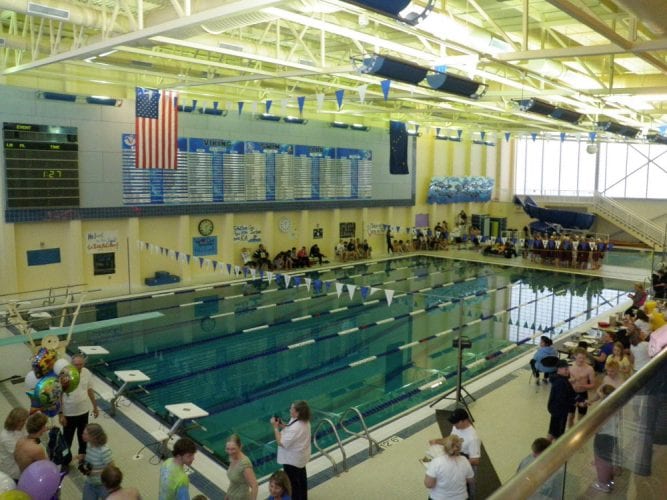 Petersburg’s swimming hosted the high school region meet in 2010. The light fixtures to be replaced can be seen in the top of the photo. (Joe Viechnicki/KFSK)

The Petersburg borough assembly Wednesday denied an appeal on a project to replace lighting in the community’s swimming pool.

Four companies submitted proposals to replace the lights in the pool. The borough announced its intent to award the contract to Sitka Electric, which proposed to do the work for just under 90-thousand dollars. Another company, Puffin Electric of Homer submitted a proposal for over 118,000 dollars and protested the decision to go with the Sitka company. The borough denied that protest in October. Puffin Electric appealed that denial.

“After we reviewed the materials submitted by Sitka Electric it was clear that they did not follow the proposal submission requirements that were clearly specified in the RFP documents,” Chesley said.

The Homer company also proposed a retro-fit of the existing lighting fixtures, instead of the installation of new fixtures and said that should be considered.

Also at that hearing, public works director Karl Hagerman defended the decision of a selection committee made up of borough staff.

“Sitka Electric’s proposal contained the required substance of the letter of transmittal. It described the services to be performed. It states Sitka Electric’s commitment to provide a complete and functional lighting system, with three to four personnel committed to installing the lighting in a safe and expeditious manner,” Hegerman said.

Borough staff also noted that the retro-fit proposed by Puffin was not what the borough wanted for the pool.

Companies from Petersburg and Wasilla also submitted proposals. The Sitka company’s price was the lowest of the four. The borough assembly discussed the appeal in a closed-door executive session Wednesday, November 29. Following that, assembly members voted 6-0 to deny Puffin’s appeal with no discussion in open session. That decision can be appealed next in superior court.

The pool was built in 2005. The work would mean new LED lights in that building. A number of the existing fixtures are not working and are difficult to replace because of their location.