Over 100 out for women’s march in Petersburg 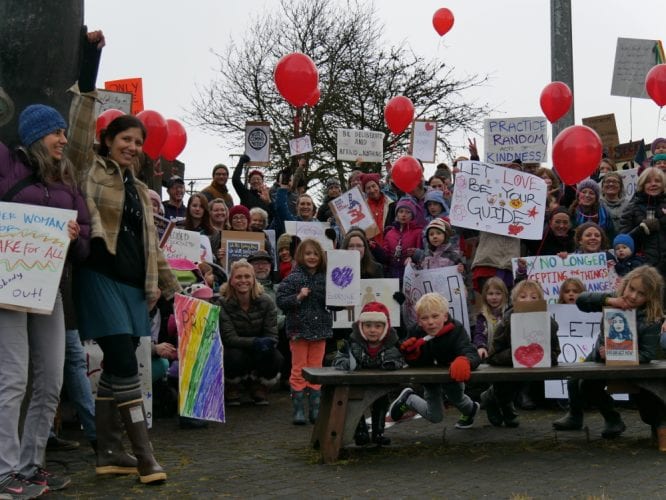 Marchers gathered for a photo by the eagle and raven totem poles in Petersburg Saturday, January 20, 2018. (Joe Viechnicki/KFSK)

Over 100 women, men and children gathered in Petersburg Saturday morning for a Women’s March for Love, joining others turning out at marches held around the nation for the second year. Organizers plan to meet monthly and hope to bolster the turnout at the voting booth this fall.

Marchers gathered at a downtown business and to create posters with slogans like “Love trumps hate,” “Love thy neighbor,” “Practice random acts of kindness” and “Dream Act now”. And they headed inside to hear from local organizers, including Malena Marvin

“If you can’t, you don’t have time to be here after the march it’s fine,” Marvin told the gathering. “We are going to meet again on February 13th to go over getting organized as voters and really turning out voters in our community in advance of the 2018 election. We’re going to be meeting monthly starting now. So know that that’s happening even if you don’t make it, feel free to find me and ask me more about that.”

Organizers asked those gathered to say their name and one word about the day. Outside, one of the walkers was Polly Lee. “Well I think it’s a fabulous expression of a movement needs to go on and it’ll go on an on for a long time to overcome the thousands of years that patriarchy has ruled with the sanctions of all the religious organizations,” Lee said. “So it takes a long time to overcome habits like that.”

Marchers walked on First Street and back to main street before heading to the eagle and raven totem poles where organizer Chelsea Tremblay spoke.

“This is our home, this is our community and we have a responsibility to protect it for who’s coming next and so as we’re here for these moments, we’d like to have a moment of silence as we contemplate who came before us, what we’ll be leaving after us and how really beautiful this world is when we really come together and think about how to make it better place for each of us,” she continued.

“In our culture the women had a lot of power, they had a lot of say,” said Ross Nannauck III, a Tlingit from Petersburg. “We honored and respected them, we took care of them and they took care of us and watched over us.”

After the march, walkers gathered again to talk about goals for the upcoming year and the 2018 election.