Alaska ferry Columbia out for repairs 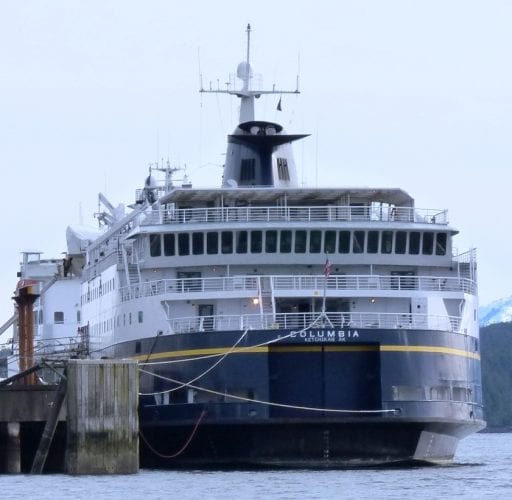 The AMHS ferry Columbia docked at the Ketchikan shipyard in 2015. (Ed Schoenfeld/Coastalaska)

Sailings on the state ferry Columbia are cancelled this week. The vessel remains in Bellingham, Washington with a broken bow thruster. A bow thruster is used to turn the 418-foot ship when it docks and also for navigating narrow waterways of Alaska’s Inside Passage, like the Wrangell Narrows near Petersburg.

“When the Columbia was approaching the dock in Bellingham last week the bow thruster broke,” said Aurah Landau, spokesperson for the Alaska Marine Highway System. “The bow thruster is a propulsion device that makes it more maneuverable.”

Landau said the vessel was able to dock in Bellingham friday despite losing that propulsion. She doesn’t know why the bow thruster broke.

The ship, the largest in the Marine Highway fleet, was built in 1974. It can carry up to 499 passengers and 133 vehicles. Last year it was in an Oregon shipyard for extended repairs to a propeller after striking an unknown submerged object in 2016.

Landau said a team of technicians has been on board since Friday, January 19 and they hope to finish repairs by this Friday, but they’ll know more by the middle of this week.

“We’re hoping to have the vessel back online next week,” Landau said. “And this case there were about 77 passengers with a light vehicle deck load who had to be rescheduled. We are accommodating people as best we can with the LeConte for the sailing that was cancelled.”

If repairs are successful the Columbia would next head north from Bellingham on January 26th with service to Ketchikan, Wrangell, Petersburg, Juneau, Haines and Skagway. With that ship down, the 235-foot day boat LeConte is the only ferry operating in Southeast Alaska this week. It makes stops in some communities in the northern panhandle.