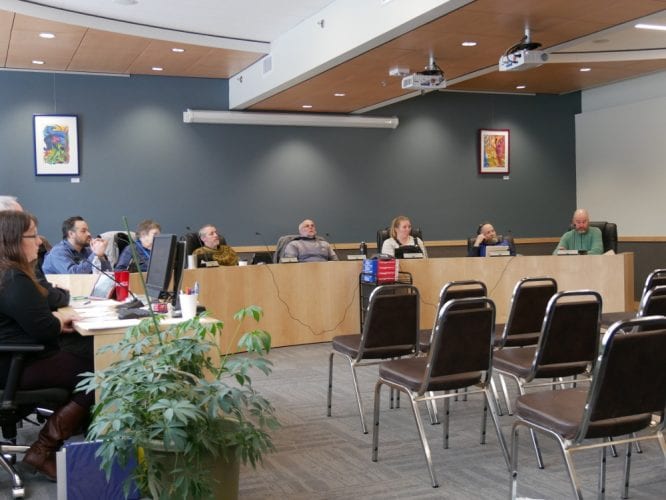 A Petersburg assembly member thinks the borough is violating state law on open meetings by forwarding emails between the assembly. Brandi Marohl emailed the borough manager with questions and her opinions regarding the ongoing discussion over the reorganization of the electric utility and public works department. The borough manager forwarded that email along with his opinions and input from the borough attorney to the rest of the assembly.

Marohl raised this issue at a meeting of the assembly in early February.

“Anything that has an opinion that’s on, especially about an action item on the agenda that is shared is then in violation of the Open Meetings Act,” Marohl said. “And it says in here, electronic communications, all sorts of things.”

Marohl was citing materials from her training as a new assembly member and said she also talked to the Alaska Municipal League about this incident.

If assembly members start an email discussion about a topic they’re supposed to be talking about in public, that’s where the borough could be in violation of the state law. The law is intended to make all meetings of a public entity open to the public. So a discussion of an issue in emails between assembly members could be construed as a private meeting not allowed under the law.

Borough manager Steve Giesbrecht discussed the situation with the borough’s attorney was told it was on the edge of being a violation.

“Her take on what you’re referring to was what I did was OK but risky because other assembly potentially have the opportunity to then engage you,” Giesbrecht told the assembly. “So it’s not necessarily what we did. It’s more along the lines of we started losing control over what other people can do.”

The mayor and assembly members disagreed over whether a violation has occurred, but they agreed they needed to be more careful not to share their opinions with each other outside of meetings. Jeff Meucci wanted to be clear that the emails were public records.

Mayor Jensen wanted to get an opinion from a different attorney about the matter and said that could be an action item at a future meeting.

Here’s the full text of the email forwarded by Giesbrecht from Marohl:

Brandi, on the issues of the review of the Mayor’s questions, I would suggest you work with Debbie to add the items to the next agenda so the entire Assembly can weigh in. As you know there are many different opinions on these issues, and staff cannot take action unless four of you agree.

Which ordinances will be rewritten if this proposal happens to go through? I would to familiarize myself with them. I can guess a few but would like to be clear.

Contrary to your and Sara’s interpretation, I think this needs to be revisited. I realize that this motion correlates in the direction that you would wish to move but making a motion with specific names, especially under the description on the agenda, is not correct according to our charter. The descriptions of the agenda item said it was “to give direction”, not to confirm. The agenda item and motion that was made was one of the most shiesty moves I’ve seen yet, though not surprised. It definitely lacked the transparency that the community is looking for.

I, of course, will speak to all of this at the next meeting. However, I think it would be wise to let the employees that will be affected by this transition weigh in. It should be done in a manner where they feel like they can be honest, no one wants to speak up against a transition that may ultimately leave them with a boss they spoke out against negatively. Though, if you’re not willing, I have no problem doing a survey of my own and presenting the information. That being said there is a lot of focus on the electrical side of this transition, but not Public Works. There are some great employees thar work under the Public Works umbrella, not giving them opportunity for a promotion within their department is in my opinion the good ole boys hiring team that I mentioned to you before. Maybe Chris would be the best for the job, but I can think of several others that may be better. One in particular, who may not even be interested, has a great disposition, is well respected and came from the same area as Karl. I realize the idea is to cut the assistant position without laying an employee off, however, I think it’s completely unfair. That’s my 2 cents…

Sent from my iPhone

Subsequent to the most recent actions on the Utility Director position, Mayor Jensen expressed interest in clarifying several issues. I reached out to our Borough Attorney and reviewed the Charter, Borough Code (Ordinances), and Borough Employee Policy Manual.

Is the Borough required to recruit and post all open positions for internal and external applicants, or can the Borough do as the Assembly desires and appoint selected individuals to these roles?

The Borough employee policy manual indicates the Borough has a “job posting program” to inform current employees of “staff” job openings. The manual appears to distinguish between “management” and “staff” in some places, but in other places refers to all Borough employees as “staff”. Past precedent for department head positions include incidents where the Borough did not post the position, and in other cases where the position was posted externally.

Comments: Based on the above, it appears the Borough Manager has the authority to hire employees, which includes Department Heads. The lack of specific details on whether or not jobs must be posted, makes me believe past City Council’s or Assembly’s viewed this as a discretionary decision to be made by the Manager. The fact that in some cases department head positions were not posted and still approved by the Assembly, lends to the accuracy of this argument.

The Mayor referenced Section 2.10.B of the Charter; “Relationship with Employees – The Assembly shall not recommend or direct the appointment or removal of any officer or employee of the Borough except as provided in this Charter. Subordinates of the borough manager shall report to and obtain direction from the borough manager and not from the assembly, the mayor, or individual assembly members.”

During the meeting of January 16, 2018 the “Assembly voted to approve the appointments of Chris Cotta and Karl Hagerman to the roles of the proposed revised positions of Public Works Director and Utility Director.” I believe Mayor Jensen’s concern is that the Assembly had no right to make these “appointments”.

The Assembly can, by ordinance, establish, alter or abolish departments (Charter sec 3.01(o)), which could include provisions designating management positions within that department. Under section 4.02(A) of the Charter, the Borough Manager is to appoint department heads, and section 2.10(B) indicates the Assembly is not to “direct” the Manager to appoint any certain individual. A number of Borough Code chapters regarding specific departments provide that the department head is appointed by the Manager, and approved or consented to by the Assembly. I (Sara Heideman) don’t believe that Charter Section 2.10(B) would prohibit such an “approval” or “consent” provision, since each provision can be given effect without violating the other. The Manager makes the initial appointment under sec 4.02(B), and the Assembly, even if it does not confirm that appointment, would be prohibited from recommending or directing the Manager to hire a specific individual.

In short, the Charter provides that the Assembly is not to either recommend or direct the Manager to hire a specific individual to any borough position, and its role is limited to approval of the Manager’s appointment, where such approval is provided in charter or code. I (Sara) understand the actions of the Assembly at the meeting of January 16, 2018, referenced the hiring of Karl and Chris in the positions discussed, however I (Sara) understand these actions may have been more in line with “confirming” the Manager’s earlier stated intentions in regard to those appointments, rather than “directing” the Manager to make those appointments. If there is any confusion on that point, that should be clarified.

Comments: I (Steve), felt the Assembly was giving staff instructions in line with my previous recommendations to appoint Karl and Chris. These instructions included the revisions of the ordinances and implementation of the salaries as outlined to achieve the savings in the Borough’s Budget.

What role does the Assembly have in setting Department Head Job Descriptions? I believe the Mayor would like this explained as the previous Assembly reviewed the revised descriptions.

I (Sara) do not find, in either the Code or the Charter, any specific provision regarding Assembly approval of job descriptions. The Assembly could, of course include language in the ordinance itself setting out specific position requirements or duties, in the applicable code provision addressing that position. Has the Assembly in the past reviewed and approved separate department head job descriptions?

In answer to Sara’s question regarding past precedent; Traditionally, no. In this instance, Steve announced the reorganization on May 2nd via email to the Assembly and requested the Assembly approve the appointment of Karl and Chris to their new positions at the May 15 meeting. However, Mayor Jensen was against the restructuring, and at the time he did not allow the reorganization issue on the agenda as an action item. It was added as a discussion item. At the end of the discussion item regarding the reorg, Mayor Jensen requested a job description for PMPL Superintendent be brought forward at the next meeting scheduled for May 30. Mayor Jensen resigned on May 18. On May 30 the Assembly does hold an executive session on the subject based upon new information brought forward. Nothing is done on the subject all summer, other than Steve making Karl and Scott both “interim PMPL Superintendents” to keep things running while the Assembly took time to think about the issues. On October 3, Mark Jensen is voted in as Mayor and at the October 16 Assembly meeting, Steve brings forward a new PMPL Superintendent job description (which was only changed by adding wording about electrical inspections) as requested back on May 30. The Assembly approves the job description, without amendment, and directs Manager Giesbrecht to begin recruitment.

So, this is the only job description they approved. (Debbie)

Comments: I (Steve) believe the Charter provision in 4.02 intends for the Borough Manager to be responsible for the administration and organization of the operations and recruitment of the Department Heads. Generally the creation and approval of a job description is part of the recruitment process. However, it is clear the Assembly has the right to specify certain skills by their approval of specific duties in various ordinances. With this being a bit vague, I have to leave it up to the decision of the Assembly on whether or not they wish to weigh in on specific job descriptions for management or even other employees.