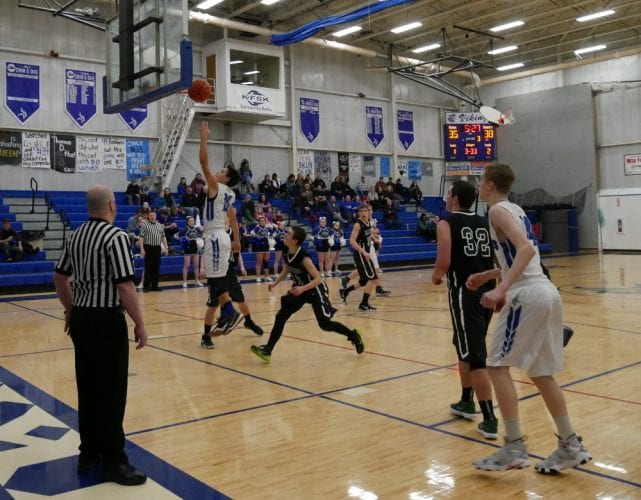 This weekend is the last chance to watch the high school basketball teams in action at home as the Petesburg High School teams host the Craig Panthers for homecoming.

The PHS boys varsity are coming off two losses at home to Haines, including a one-point loss in a game that went into four overtimes. The Glacier Bears won 64-63 on Saturday night and then 64-58 on Sunday morning.

Coach Rick Brock said it’s the first quadruple overtime game he’s been in or even seen. Brock said his starters had fouled out by the end of that game and he was forced to go well into his bench.

“I think we finished the game, I was telling somebody, one of the guys on the floor was in eighth grade last year, one was out with an injury and the other three were JV players,” Brock said. “But you know they stepped up and tough position to be in. Some of them haven’t played and awful lot this year. They played some quality minutes in the second, third, fourth overtime and gave us a chance to win at the end, you know we got a good look at the basket. So yeah, they really stepped up. What was cool too was all the starters had fouled out and the support that they showed for their teammates on the floor I thought was special, helping them during the time outs, encouraging them from the bench, getting them water and stuff when we were in the time outs and just trying to encourage them to keep playing well.”

Brock calls his team battled tested after a number of close games going down to the final possessions. He credits senior Mark Neidiffer with leadership on a young team.

“What a heart that kid has,” Brock said. “You know the shot he hit to send the game with a three, I believe to send it into overtime, or the second, I think, one of the overtimes. But you know he was making big shots before that and then continued to throughout the overtime. His play just that the heart that he has really stood out for me and I think the other guys kindof carried that through and really helped us. You know we’ve got a really young squad. Lots of inexperience coming into the season. The guys have gained a ton. You know he’s one of those guys that just leads by example and so I can see that, him instilling that in the younger guys, you know we really have a never quit attitude on this team. You know we’ve been down double figures on the road and we’ve come back had a chance to tie or win the ball game at the end. That’s a collective thing but a lot of it comes from really from his heart and his leadership. I gotta say something about that. We’ve been struggling offensively and some of the other guys stepped up, you know, Louden Sandhofer Thomas Durkin, Rylin Wallace. I thought their play on the court, putting the ball in the hole for us is important. Things that we’ve been missing this season. Hopefully they’ll continue to do that and we can start to all play well at the same time.”

The boys are 1-9 on the season. Meanwhile the girls varsity improved their record to four and six (4-6) with a pair of wins against the Glacier Bears, 50-28 on Saturday night and 51-24 on Sunday morning. 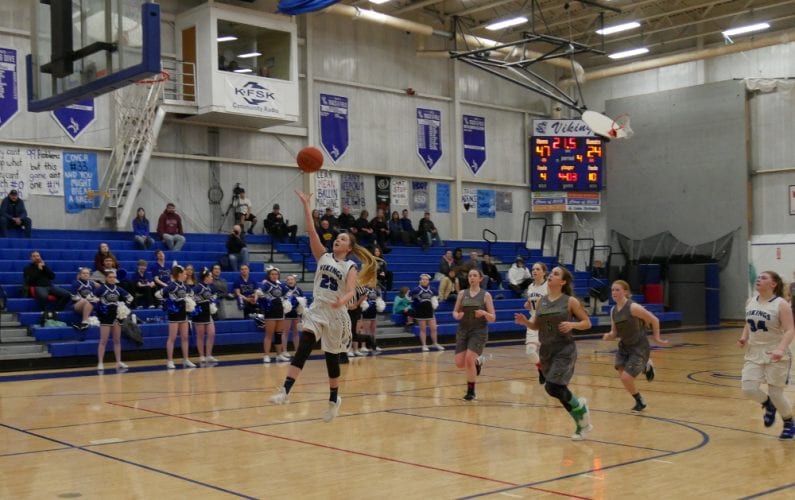 Seniors Courtney Fredricksen and Katie Brock led the Lady Vikings in scoring Saturday with 15 points apiece in a game that only saw the seniors making baskets. Senior Maddy Parker led scoring with 14 on Sunday but all team members were able to score in that game. Girls coach Dino Brock’s team was making its shots and grabbing rebounds, two points of emphasis for him.

“Sunday was just a really well balanced game I thought offensively, defensively,” Brock said. “We pressed for most of the game just kinda trying to get ourselves awake that early in the morning. I thought that we did a nice job.”

Brock said his line up is not set even this late in the season. “It just keeps kindof changing. We’ve got some people that have started all the games but I think we’ve started eight different kids, seven different kids,” he said. “We actually haven’t had a game this year with our whole varsity squad. It’s been one thing or another with injuries and sicknesses and everything else it seems like. So it’s just been an ever changing thing. Usually by now the lineup’s pretty set but that hasn’t been the case this year.”

Both the girls and boys play against Craig at home this weekend and it’s homecoming. On Friday, the boys varsity plays at 6 p.m. followed by senior recognition for the basketball teams, cheer squad and pep band. Then the girls varsity plays at 8 p.m.

On Saturday, it’ll be the Lady Vikings first at 6 p.m. followed by homecoming festivities and then the Vikings playing at 8 p.m. There are also junior varsity games at 3 and 4:30 p.m. each day. KFSK will broadcast the varsity games live from the high school gym.