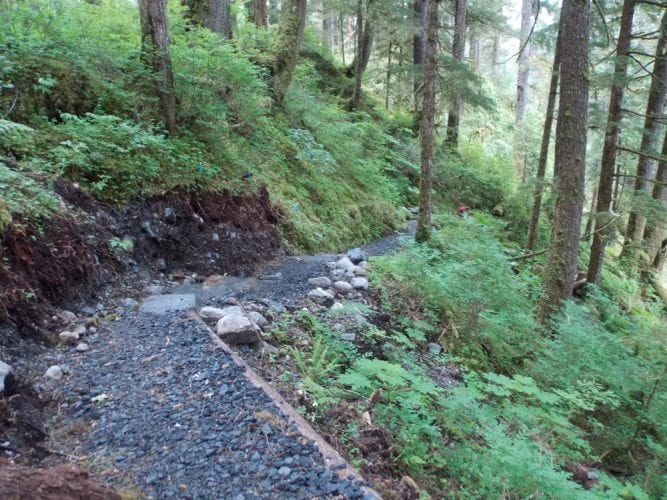 The trail at Cascade Creek in Thomas Bay north of Petersburg was improved in 2015. (Joe Viechnicki/KFSK)

The U.S. Forest Service this year is starting up an effort to plan and analyze a wide variety of projects on both the Wrangell and Petersburg ranger districts. It’s a change from the agency’s past practice, which has produced separate environmental review documents for each project. The Forest Service is looking for public input and ideas on recreation work, stream restoration, timber sales and other management activities that could happen on National Forest land over the next 10-15 years.

The effort is called the Central Tongass Landscape Level Analysis and it’s aimed at identifying projects that could happen on the 3.6 million acres of National Forest land on the two ranger districts.

Carey Case, interdisciplinary team leader and NEPA specialist for the Forest Service in Petersburg hopes this process will take a few years and will produce an environmental impact statement that will cover multiple projects.

“Instead of gearing up repeatedly for a NEPA project here and a different kind of NEPA project and a bunch of smaller NEPA projects going on simultaneously that we do one large one and then we spend less time planning and more time with our boots on the ground,” Case said.

The agency calls this process “condition-based NEPA,” meaning they’ll be analyzing a range of projects under one environmental impact statement. Specific locations for the projects will be determined during implementation rather than during the planning process. Agency employees say they’re still doing the same amount of review but in a different order.

Case said it’s new direction nationwide for the agency to try and become more efficient in the planning process. “How we schedule flights, how we’re using contractors regionally, things like that,” she said. “Oftentimes if we’ve cleared a project and that’s all you’ve cleared, you lose out on the ability to integrate with other resources that are wanting to do work in the same area. And so we found that that’s definitely a way that we’re not serving the public, we’re not contributing to the economy as well as we could. So that’s definitely a motivation and looking at how to do business differently on the ground.”

A similar planning effort is further along in the process for Prince of Wales Island.

As for timber sales in this area, Petersburg district ranger Dave Zimmerman said they’re looking at 10 areas on the central Tongass on roaded lands that have already had some timber harvest. He said they’re starting from scratch to look at possibilities for offerings in the area. “On Mitkof particularly we’ll have I would suspect a larger sale and then it’s my wish as well as the team and the forest supervisor’s to have a more constant supply of smaller sales and wood available for the local sawmill owners that we have here,” Zimmerman said. “Kake is the same way, Wrangell’s the same way. These communities have the smaller mill operations. We wanna be sure we can offer that.”

The 2001 roadless rule concentrates logging on these already roaded portions of the forest.

Zimmerman is hoping to have a decision on the planning effort by 2020 and wants to be able to have projects ready to go.

“Once we know with the public input of where and what they would like then we’ll start implementing what we can and what money we have,” Zimmerman said. “So if it’s a timber sale then we’ll start locating where that timber sale might be. The specialists will come out at that time, with the sideboards, we still have the forest plan, we still have all the things that we need to do. But this document is going to be I guess clearing is the right word, clearing a lot of activities over a 10-15 year period, which is (going to) save us a lot of time and money.”

The Forest Service also will be considering things like thinning for stands already logged, habitat improvements for fish and wildlife, management of logging roads and possible recreational trail or cabin work. The agency has started a website for the planning effort. Staffers hope people will complete a two-page questionnaire with suggestions, email in their comments or attend upcoming meetings.

“The most helpful kind of comment would be I’m interested in this activity for these reasons,” Case explained. “I’ve seen maybe issues with how it’s been implemented in the past because of the…you know definitely giving us solutions if it’s something you know I haven’t been real crazy about this in the past, here’s what I’d like to see you do differently or I’d like to see you do more of this. Or I’ve never see you do this I’d like you to give it a try.”

In Petersburg open houses are scheduled for Wednesday March 7th from noon-2 p.m. and 5-7 p.m. at the Holy Cross house of the Lutheran Church. Other meetings are also planned in Wrangell and Kake.