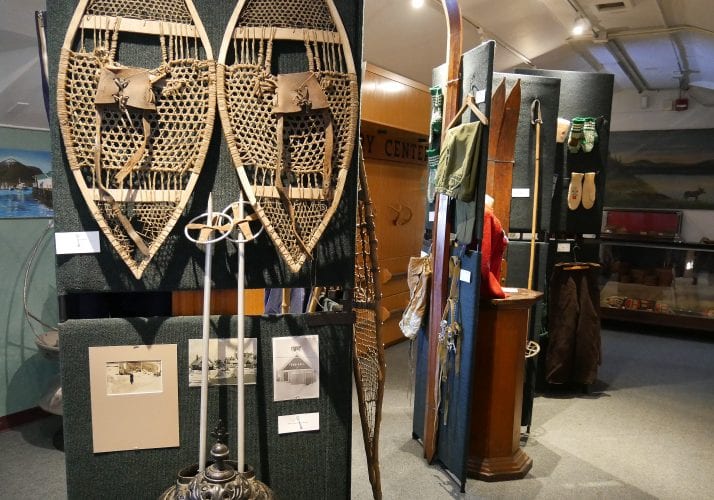 Petersburg is known for its history of hard working Norwegian fishermen. But it wasn’t always work and no play. An exhibit at the local Clausen Museum showcases residents recreating in the wintertime from 1910 to 1970. KFSK’s Angela Denning reports from Petersburg:


Ann Lee unrolls a map inside the museum’s office. It’s a topo map of the hills near town. Lee works at the museum and has been putting together the exhibit called, “Winters Past.”

“These are records and documents from the original ski club,” Lee said.

The box with the map is full of historical information about past Petersburg ski clubs. It’s on loan to the museum from the current ski club.

“You know, Petersburg before we had central heating and electricity, the winters were kind of long and cold and people took every opportunity to get out and enjoy it,” Lee said.

The museum’s exhibit includes many black and white photos. Some of the prints are on display and others are shown digitally in a slideshow on a small TV screen.

Lee: “And then we have photos showing all the snow. The old town hall with a bunch of snow in front of it.

Denning: “Yeah, what I’m noticing is feet of snow in these old photos and it makes it seem like this week is completely normal…all the snow we’ve been having.”

Snow piles everywhere. Snow that would stay around for weeks.

Downhill skiing used to be a popular past time in Petersburg. There was a designated ski hill with a tow rope to get up and down. And a ski lodge with a wood stove where people would take breaks to warm up and drink coffee and hot chocolate. It was located on the edge of town where the airport is now. There was also a ski jump there.

Lee isn’t sure what year the original ski club was formed but the museum’s collection includes several sets of wooden skis handmade in Petersburg.

“You can see that they’ve carved on some of them, they’re beautiful.” Lee said. “These longer ones are for ski jumping. And these handmade snow shoes are made out of alder branches and rope.”

In a side room of the museum a silent, black and white video plays. It shows Petersburg residents downhill skiing in 1941.

“You can see it’s a nice long hill and it’s nice to see them in their head scarves and wool coats,” Lee said.

Denning: “Wow, there’s a lot of people on the mountain too at the same time.”

Lee: “Yeah, you know, a lot of people turned out. I’ve counted like 75 people in the background in these videos and photographs, children, adults. You can see the smoke coming out of the ski cabin, which was quite large.” 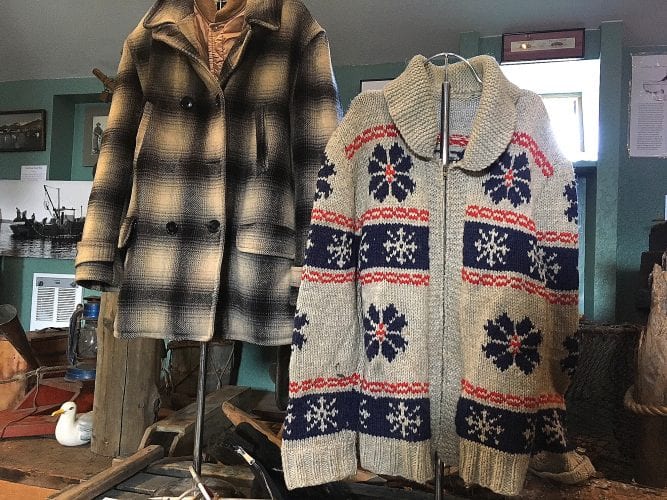 Before synthetic fabrics, wool was the most popular material to stay warm in the winter in Petersburg in the 20th century. (Photo by Angela Denning/KFSK)

One of the still photos shows Petersburg residents ice skating on a lake on nearby Kupreanof Island.

Lee: “They didn’t have a road to go out to the slough so people would take boats out there and go across to Green Rocks to go up to Mary’s Lake and skate.”

There is a lot of vintage outdoor wear in the exhibit too…lots of wool. Wool pants, hand knit sweaters, and long underwear.

Normally, the museum would be closed in January and February but management decided to open on Saturdays this winter to allow visitors to see this special exhibit.

Lee hopes to have more exhibits in the future showcasing the museum’s collections. In a process that has taken years many of the museums items are now cataloged into a computer system so they can be easily rotated in and out of storage.

“Every article in the museum has to have a number, a description, a paper copy which goes into the files and also a digital copy for information in the computer,” Lee said.

For Lee, the “Winters Past” exhibit is personal. Her grandfather built one of the sleds on display from 1910. And her grandmother knit one of the old wool sweaters. But although Lee was born and raised in Petersburg many people in the photos and video remain a mystery.

She hopes to get as many people as possible in to see the exhibit so there will be even more of a story to tell in the future.

The exhibit “Winters Past” is open Saturdays only 10 a.m. to 4 p.m. through March at the Clausen Museum.