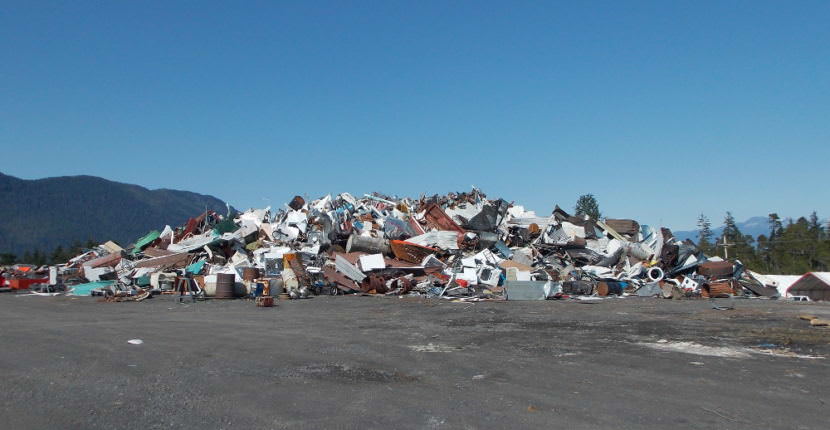 Scrap metal and junk cars are piled up at Petersburg’s landfill in 2017. Eight Southeast cities are working to set up regular barge runs to recycle metal junk. (Photo by Joe Viechnicki/KFSK)

Hagerman said prices have been low, so it would have cost more to ship scrap metal south than could be recovered by selling it for recycling. He said the price was $175 a ton last summer, but could be up to $230 a ton later this spring.

“That’s the value in Seattle, not in Petersburg, Alaska. So, the trick is transportation and the cost of getting that metal to market,” he said.

The solid waste authority reached a scrap metal recycling agreement with another company about four years ago. But it fell through. Wrangell has had a large amount of scrap metal barged off through a separate agreement.

Hagerman said the spring collection will be a one-time deal.

“The second part of the scrap metal agreement with Waste Management is hopefully to set up a long-term agreement with the company to remove metal from the communities on an ongoing basis,” he said at a recent Southeast Conference Mid Session Summit in Juneau.

The authority is also looking at what’s needed to continue hazardous waste pickups from Southeast communities.

The current contract is running out and the company doing the work doesn’t want to continue. Hagerman said a committee is considering three proposals to keep the pickups going.

Several larger Southeast communities have their own contracts for recycling scrap metal and hazardous waste.