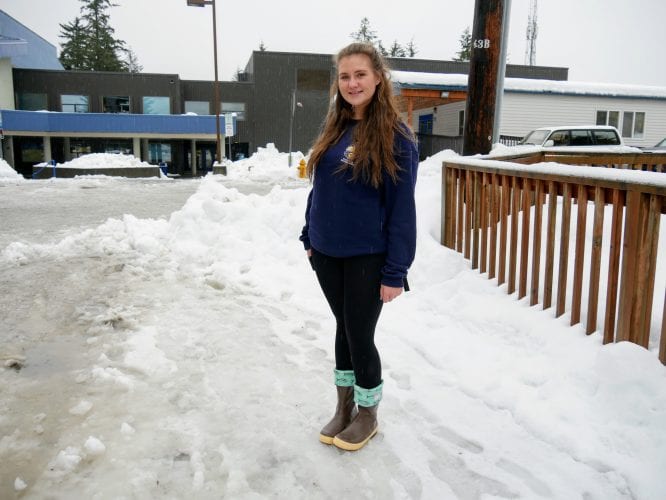 Clarisa Boshoff, 16, is a Rotary exchange student from South Africa. She will be in Petersburg January-December 2018. (Photo by Angela Denning/KFSK)

When Clarisa Boshoff stepped off the plane in Petersburg about three weeks ago she was thrilled there was snow. The 16-year-old is a Rotary exchange student from South Africa and she had never seen the cold, white stuff before. The hot and dry climate of her country is nothing like the rain forest of Southeast Alaska.

South Africa has been in the news recently because of the severe drought the country is experiencing. One of the biggest cities, Cape Town, expects that it will be out of water completely by July.

Boshoff is from the city of Johannesburg with about four and a half (4.43) million people. She tells KFSK’s Angela Denning that everyone in her country is conserving water now.

Boshoff is a Rotary exchange student from Johannesburg staying with the Jerry and Stacey Dahl family. She will be in Petersburg until December.

She is currently looking for babysitting jobs. She says she has experience and she loves children. She can be reached on her cell phone at (907) 650-7100.