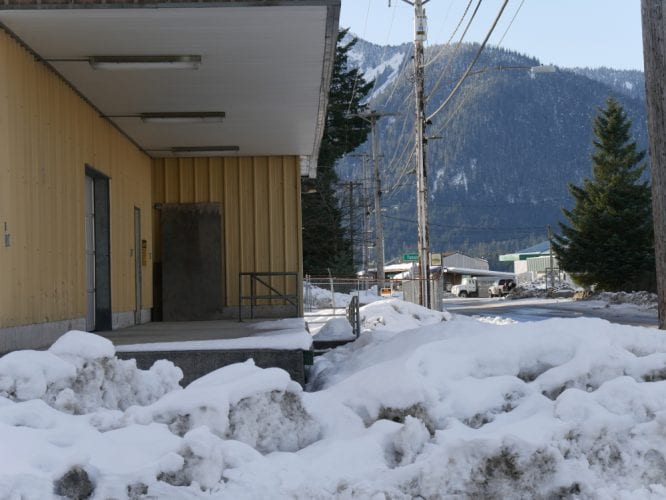 The old Union Oil property in the foreground could be exchanged with the Southeast Island Fuel gas station property, which Petro Marine leases from the borough, in the background. (Joe Viechnicki/KFSK)

The Petersburg borough will pursue a land exchange with the oil company Petro Marine Services for property near South Nordic Drive.

Petersburg’s borough assembly in February directed staff to take steps for a swap of borough tidelands on South Nordic and Dock Street currently leased to Petro. In exchange for that land, the borough would receive land just across the street from the community cold storage, including the old Union Oil building and the site of a cleaned up tank farm. The harbor department would like that Petro property for a centralized maintenance and storage building. Harbor staff currently store their equipment and do maintenance work at the harbor office building and a number of other sites around town, including some container vans.

Harbor master Glorianne Wollen explained to the assembly that the present situation can’t continue. “It’s just not working any longer,” Wollen said. “We need to have a better facility, bigger facility. And so this is an idea that has been brought before you. And do you want us to move forward on or should we come back to you with something else?”

Over a decade ago, the borough took over ownership of all three harbors from the state and has since been rebuilding floats and docks and adding facilities.
Borough manager Steve Giesbrecht said there’s currently no local law that allows for a land exchange. The first step would be an ordinance to allow the assembly to approve a swap.

Mayor Mark Jensen wasn’t in favor of it as presented. “I understand the situation the harbor’s in, not having a place to work out of,” Jensen said. “I think the borough owns land that it could construct something on that would be less of a cost to the borough in the long run. We’re looking at losing 30,000 dollars a year in a lease and property tax.”

The Petro lease for the land the company wants brings in 28,500 dollars annually for the harbor enterprise fund. That payment would end, along with a little more than four thousand dollars of property tax revenue.

Kurt Wohlhueter did not think the vote committed the borough to making the exchange yet. “Once you know Petro steps up and gives us an assessment and we have our assessment, then we have more tools in the toolbox that we can then look at maybe we have better options to look elsewhere but until we go this route we’re just guessing,” Wohlhueter said. “I’ll be voting for this.”

The swap could be based either on tax assessments of the properties or the two sides could get appraisals, which give a better idea of what the properties could actually sell for.

Current assessments put the tax value of the Petro property more than 100-thousand dollars above the land the borough would give. If the exchange went forward and the borough included a cash payment, Petro has offered that money toward a mooring dolphin at the fuel dock that the company operates.
Mayor Jensen was the only no vote on a motion to direct the manager to enter into negotiations with Petro for a land exchange.