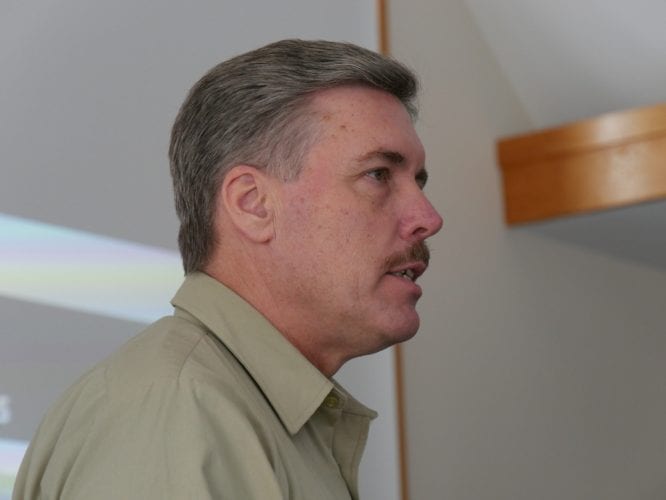 Residents in central Southeast Alaska this month learned about a large-scale planning effort for National Forest lands around Petersburg, Wrangell and Kake. It’s a relatively new approach for the U.S. Forest Service on the Tongass and it could result in a wide variety of projects on the 3.6 million acres of National Forest land on the Petersburg and Wrangell ranger districts.

Local residents trickle in to a daytime information session at the Lutheran Church in Petersburg, where the Forest Service set up tables for different specialties on the forest. Staffers specializing in timber and roads, hydrology, archeology, fish and wildlife and recreation prepare to hear local ideas for activities or improvements on National Forest land.

Tongass forest supervisor Earl Stewart explained the process is a different way of looking at projects and was started on National Forest land in the lower-48 about 5-6 years ago.

“So instead of the agency developing a proposal and sending it out for comments and feedback, we take the local community’s concept and ideas and then lift those up as that proposal,” Stewart said. “So the ideas and the thoughts that come up from Kake, or from Kupreanof or Petersburg or Wrangell will help formulate that initial proposal that then go out for the National Environmental Policy Act and Notice of Intent, analysis process.” 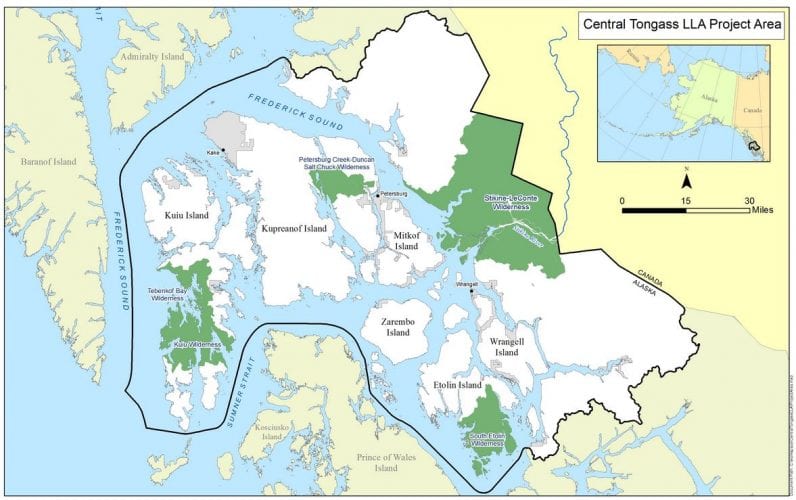 The planning effort, called the Central Tongass Landscape Level Analysis, seeks to identify and authorize multiple different types of projects for the next 10-15 years. The planning effort could mean new timber sale offerings, or tree thinning, recreation projects, stream restoration or other fish habitat work. The agency’s past practice for the required environmental review under the National Environmental Policy Act has been to propose one specific action, like a timber sale or stream restoration, and then do analysis on that action alone. It’s only the second time for this approach on the Tongass; the first is on 1.8 million acres of land on Prince of Wales and surrounding islands. In that instance, a committee of representatives from Prince of Wales communities and tribal governments, timber companies and conservation groups helped generate a proposed action.

“So they provided their proposal I think it was June 5th of 2017 so that is the proposed action now that Prince of Wales Landscape Level Analysis is going through and assessing,” Stewart explained.

That proposed action on Prince of Wales recommends continued harvest of old growth trees along with a wide variety of education, stream and culvert restoration, fish and deer habitat work and recreation projects. 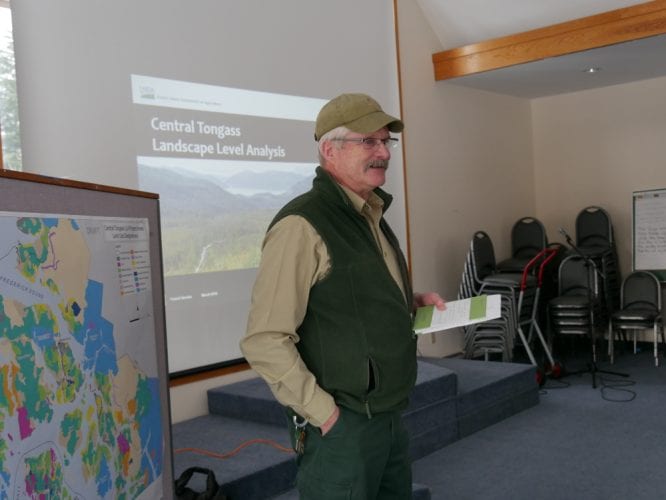 Petersburg District Ranger Dave Zimmerman hopes to have some collaborative groups similar to the one for Prince of Wales.

“Being on different islands all of our communities, it’s tougher here, but it would be sweet if during this process we had different focus groups that would get together and work with us. I don’t mind working individually either and we’ll do that to begin with or however long before maybe someone steps up. So at least by the end of this project, I would sure like to have some collaborative groups, a whole range of philosophies so we can work together and do the best thing for the communities associated with this district and with the Wrangell district.”

The agency has had some input already on the central Tongass analysis and interdisciplinary team leader Carey Case summed up some of that. “So we have had some input so far, a host of things,” Case said, adding, “no new roads, more roads, paddle trail with camp sites. So that’s a great example of where would these camp sites be? What would they look like? Do you want a platform, a leveled site, how much development, that sort of thing, more timber harvest, less timber harvest, increased protection of upland fish habitat, so a little of everything. So that’s the kind of information we’re here to gather today.”

Forest Service officials fielded questions on timber harvest levels for this part of the forest and responded the Petersburg and Wrangell districts would likely produce some portion of the forest-wide 10-year target of 470 million board feet.

Some attending the session were interested in access to timber on Mitkof Island. Petersburg resident Seth Perry wanted the agency to take steps to make it legal to cut fire wood for sale to others, something that he said is done on the Wrangell district.

“In the Wrangell district they’ve come up with a tag program, where you can buy tags from the Forest Service and tag your loads of wood as they come out of the woods and they can keep track of everything and they can keep the numbers and see what’s going where and it’s working out pretty good for ’em,” Perry said.

The Forest Service is hoping to have a purpose and need and a proposed action published by this May. After that the agency will develop alternatives and hopes to have a draft environmental impact statement out by sometime later this year.