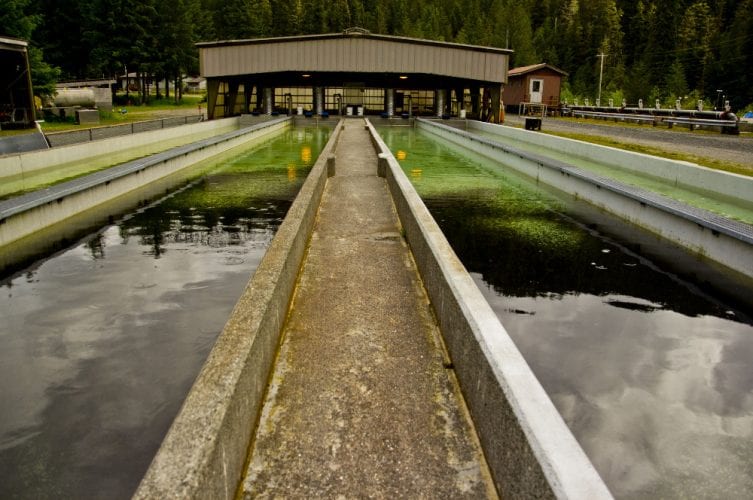 Governor Bill Walker’s proposed capital budget would fund one and half million dollars of upgrades at the state-owned king and coho salmon hatchery at Crystal Lake, about 17 miles south of Petersburg.

Crystal Lake is owned by the state and operated by the Ketchikan-based private non-profit Southern Southeast Regional Aquaculture Association, or SSRAA . The money would pay for new concrete raceways where the young salmon are raised, along with plumbing underneath.

Bill Gass, SSRAA’s production manager, says some of the raceways have been leaking for several years. “The danger now is that we’re afraid this leak could turn into a catastrophic failure, at which point we could lose the whole thing,” Gass said. “So it buys us continued time to operate. We think it has to be done. It’s just a matter of how long it can hold on before it failed.”

A fire destroyed buildings and killed young salmon at the site in 2014 but the state paid to build a new facility. That construction did not include replacing the raceways or piping.

The facility produces and releases 600,000 king salmon smolt into Blind Slough each year along with 160,000 young coho salmon. Other kings from Crystal Lake are also released in Neets Bay north of Ketchikan, Anita Bay near Wrangell and City Creek near Petersburg.

“Crystal Lake has been incredibly productive,” Gass said. “I don’t think people really realize as bad as the king salmon situation is, over half of the hatchery produced king salmon in Southeast Alaska spend a portion of their life at Crystal Lake.”

If this capital budget money is approved, the replacement could happen in May and June.

It’s a relatively sparse capital spending proposal this year with the state continuing to experience a multi-billion dollar annual spending deficit. The budget also includes nearly four million dollars for a hydro-electric plant in Kake and a quarter of a million dollars for the Inter-Island Ferry Authority. The funding still needs approval by the legislature.