Petersburg school to get its first kitchen 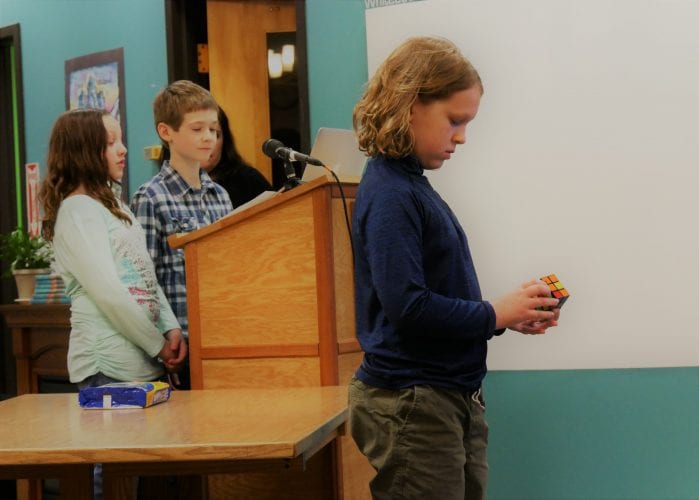 Petersburg’s middle and high schools do not have a kitchen. Food for students gets transferred by car from the elementary school. But that’s about to change. The Petersburg School Board unanimously approved funds to go towards a remodel project during their meeting Tuesday night. As Angela Denning reports, the project also includes upgrading the kitchen at the grade school.


Isaac Litster is a curly haired 5th grader. He’s standing in front of the school board twisting and turning a Rubik’s Cube in his hand.

“It was hard at first and seemed like it was beyond me to solve one,” Litster said. “I messed around with it I figured out the multiple algorithms to help me solve it and help other people solve it.”

Litster is one of 30 students in a Rubik’s Cube club that has been gathering after school.

While all students might not be as quick on a Rubik’s cube as Litster, they all have one thing in common. They need to eat. And what they eat counts towards their education. Numerous studies show that healthy nutrition improves students’ academic achievement.

For years the school district has wanted a kitchen for the older students. And in 2014, they were close. They thought they had a state grant from the Alaska Department of Education and a design plan. But the state hit economic hardship and froze the funds.

The district decided to prepare itself for when the money would come back and knew it needed local matching funds of over $500,000.

Finance Director Karen Quitslund told the school board that the district didn’t want to ask the borough for the money after already getting some for a remodel at the elementary.

“We have been planning since that project was going on that we probably wouldn’t go ask the borough for that and we would try and fund it in house ourselves,” Quitslund said.

So, the school district started growing a fund specifically to match a grant for the kitchen project.

At the last board meeting, Quitslund asked the school board to transfer more money in–$196,000. The money is leftover funds from spending on software, the new phone system, and carpet replacement. It brings the new balance for the kitchen fund to $581,000 which is enough for the school district’s share of the project.

In December, the school district got the go ahead for a new state grant for nearly $970,000. The total kitchen project is expected to cost about $1.5 million.

During a live radio show on KFSK earlier in the day, Kludt-Painter said they are now taking a staggered approach to the project. They’ll start with the high school where a kitchen will be built. It will include all the regular cooking appliances and a grill.

“We’re really excited because it’s going to allow us also to have concessions on a regular basis. People can count on it in the community,” Kludt-Painter said. “They’re going to go to a game and they know they can get a burger and it’s just the regular thing.”

Then the grade school kitchen will get improvements, expanding the eating area.

The new timeline will have the project starting this fall while school is in session. Kludt-Painter says it’s not ideal.

“But it’s manageable,” she said. “We did it a few years ago with the renovation at the elementary school, we actually taught school pulling all the walls off.”

The school district prides itself on the food that it offers students. There is a large garden behind the grade school where the students help grow vegetables. The produce is fed to the students when it’s in season. For the elementary school kitchen to be expanded the school will need to move a few classrooms around to accommodate the extra space. But they say all of that work will be worth it because they will be able to bring healthy food to all of the students more easily.