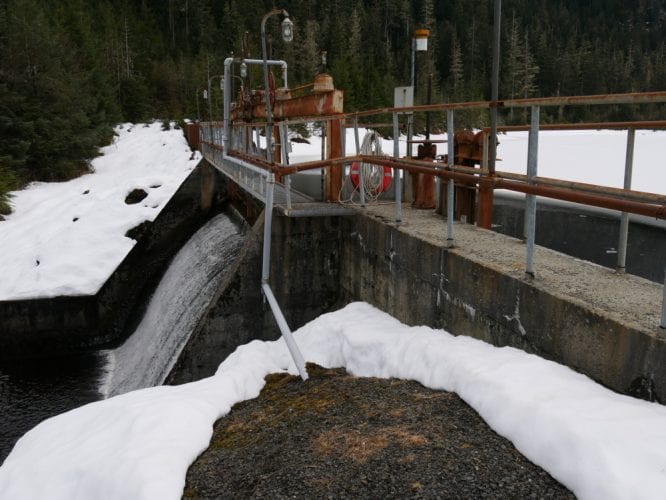 A contractor this summer will be repairing a concrete dam at one of Petersburg’s two water reservoirs. It’s the older of the community’s two dams and dates back before statehood.

Petersburg’s smaller water reservoir is at City Creek, about three miles from downtown. It’s about one fifth the size of a larger and newer reservoir at Cabin Creek. The dam at City Creek can hold 52 million gallons and is still used by the water department as a backup water source.

The borough’s utility director Karl Hagerman said every three years the state requires a thorough safety inspection of the dam and that inspection noted deterioration of the surface of the dam spillway.

“The face of the dam is what we’re working on, what we’re focusing on with this project because of decades of water spilling over the top of the dam, the concrete that was used is slowly eroding away and so, it’s really just part of standard housekeeping to maintain that dam in good condition so that it doesn’t fail,” Hagerman explained. “That is our secondary drinking water source, raw water source, so we need to keep it functioning and usable.”

The dam dates back to the early 1950s. A January 26, 1951 edition of the Petersburg Press reported that construction of a new dam would happen in the summer of that year, using a 152-thousand dollar appropriation from the Department of Interior’s Office of Territories. Prior to that structure an older wooden dam was located downstream on City Creek. This concrete structure had some upgrades in the 1970s and the reservoir was dredged at least once. Hagerman said the concrete has eroded and steel rebar is showing but he doesn’t believe the dam is in danger of failing.

“You never wanna get to that point with a dam,” Hagerman said. “This work is going to be preemptive as far as catastrophic failure is concerned. It’s something that we definitely need to do and the state expects us to take care of.”

The borough will hire a private company to do the work. It will involve building a work pad at the bottom of the dam to stage equipment.

“And then they’ll use some mechanical means to grind off the existing surface to get down into some a little more solid concrete,” Hagerman explained. “And then from that point they’ll dowel in some rebar and put some steel on the surface. And then there’s gonna be some fairly complicated form work to reset the original surface of the dam.”

The concrete pour has to follow an arc, to minimize erosion as water spills down its face. And the contractor will be pouring about 6-8 inches of concrete on top of what’s there. The estimated cost of the work was 200-300,000 dollars. The work will be paid for with water department cash reserves, built up from payments from customers. It could start as soon as May 1st with a completion date of September 28th.

Hagerman explained it’s important to have that backup water source.

“If we ever have any problems with the pipeline or just basic maintenance on the pipeline from Cabin Creek, it’s in our best interest to have that back up source so we switch right to it and continue to make water for the community at all times of year and it’s worked out really well,” he said.

The borough assembly still needs to vote on awarding the contract for the work, likely at their first meeting in April. The borough Friday, March 23 opened bids from companies interested in doing the work. Three submitted bids, with Reid Brothers of Petersburg the low bidder for just under 220,000 dollars. The other companies were North Star Construction and Ketchikan Ready Mix. Hagerman will be recommending the assembly award the work to Reid Brothers at the assembly’s April 2nd meeting.