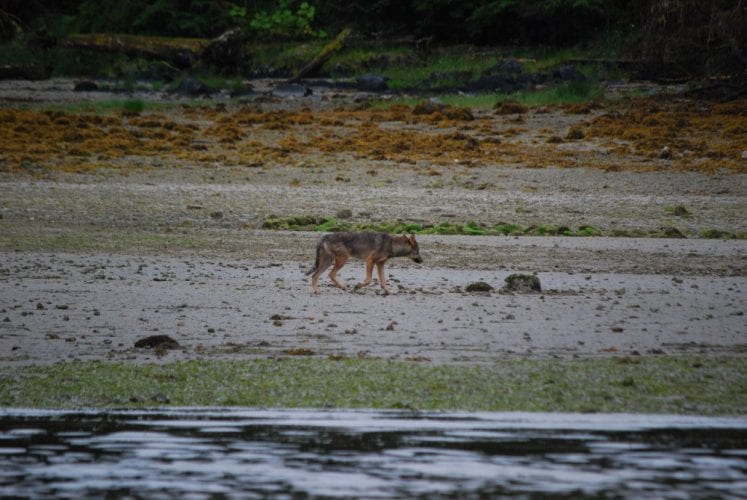 A wolf walks the tide flats near Anan Creek on the mainland south of Wrangell. (Photo courtesy of Cindi Lagoudakis)

The Federal Subsistence Board will be deciding on changes to regulations for Southeast Alaska deer and wolf hunting and trapping this week.
The board meets Tuesday through Friday, April 10-13th in Anchorage to vote on proposals to change seasons, bag limits and other rules for subsistence wildlife hunting and trapping regulations across the state. The board is made up of members of the public and top officials from various federal agencies, including the U.S. Forest Service and U.S. Fish and Wildlife Service. Their decisions impact hunting and trapping on federal land in Alaska.

Several Southeast proposals will be considered by the board on its consensus agenda. These are proposals that have agreement from regional advisory councils, along with federal and state agencies. One would expand the customary and traditional use determinations for deer hunting for all rural residents of Southeast Alaska. That would mean rural residents in game management units one through five could hunt under federal seasons and bag limits for deer throughout the region. The region’s advisory council proposed that change and it’s supported by federal agencies.

Another proposal would change wolf hunting and trapping seasons in on the mainland of Southeast to match state regulations. A separate one would lengthen the federal season for wolf hunting on the islands around Petersburg, Wrangell and Kake.

The Klawock Cooperative Association is seeking an increase to the season and bag limit for black bear around Prince of Wales Island. That’s an attempt to lessen bear predation on the island’s deer. The change is opposed by federal staff and the regional advisory council.

Yet another proposal would limit the number of people that someone can hunt deer on behalf of, under the designated hunter program around Wrangell, Petersburg and Kake. That was proposed by Wrangell’s Fish and Game advisory committee. Both the regional advisory council and federal subsistence staff oppose that change.

The board will also consider removing the requirement for marking traps throughout the region, similar to a change made to state regulations in 2016.

Several other Southeast proposals don’t have agreement among the reviewing agencies or advisory councils and will be voted on individually.

In that group are a proposal to limit the deer harvest for non-federally qualified hunters around Prince of Wales Island. Another would increase the harvest of wolves on POW.