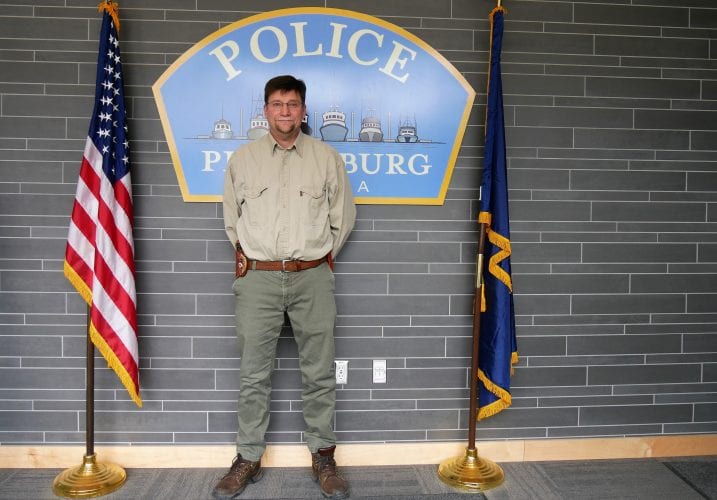 Sgt. Randy Holmgrain poses in the Petersburg Police Station. He has been accepted into the FBI National Academy for 2019. (Photo by Angela Denning/KFSK)


Randy Holmgrain is used to wearing a uniform. Before working for the local police department the 53-year-old was in the Marine Corps. He spent six years in combat zones in Iraq and Afghanistan.

“And then in 2012 after I ended up with Typhoid,” said Holmgrain, ‘You know, I really wanted to come home and not see exciting, exotic places where I got sick (laughs).”

Joking aside, Holmgrain says coming back to work in Petersburg’s police station was a natural segue for him.

“Granted one is military and one is police but your still helping your fellow man and doing interesting things and that was the draw for me,” Holmgrain said.

Holmgrain says he likes working for the Petersburg police because it keeps him on his toes. He says the small size of department lets him continue to learn new things.

“It’s not a narrow scope of knowledge. I have my fingers on a little bit over everything, ” Holmgrain said, “everything from dispatch to jail to administration to patrol to investigations because here unlike larger departments, an officer responds to the call. They don’t say, ‘Oh, I need a detective to now respond to the case. They have it from the beginning to the complete end of the outcome of the case so it’s an interesting dynamic.”

The FBI’s National Academy is located in Quantico, Virginia. It trains about 220 officers at a time through 10 week courses. With that, Holmgrain hopes to learn about a variety of topics including policy, administration, and leadership. He says he’s had exposure to all of it but he’s looking to increase the depth and the width of his knowledge.

“The biggest thing is exposure to how other people do things, you know, what assets are out there for us to tap into? It’s not reinventing the wheel,” Holmgrain said. “I mean granted we’re in a smaller community but we’re still a microcosm of national society and other people have already encountered those types of instances so you know who to reach out to and say, ‘Hey, I’ve got this unusual thing that we’ve never seen before and you have.”

“The networking is invaluable,” he said. 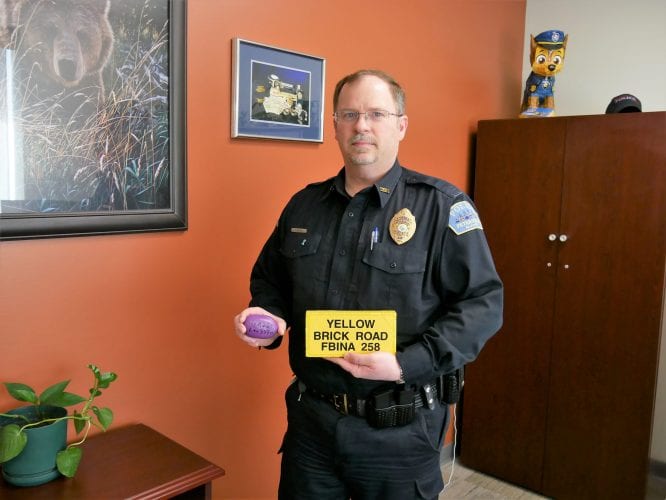 Police Chief Kelly Swihart stands with memorabilia from his time at the FBI National Academy in 2014. He received a yellow brick for completing a 6-mile physical fitness obstacle course. The purple rock is for getting a perfect score in his Employment Law class. (Photo by Angela Denning/KFSK)

Swihart went to the FBI National Academy in 2014. There, he says the officers shared email addresses with each other to continue communications after the academy was over.

“If someone needs a policy example or has a specific question or problem they can put that question out to the group and invariably somebody has already solved that,” Swihart said.

Swihart says just working closer to the FBI is helpful. Petersburg’s police department works with the FBI on quite a bit of cases.

“Particularly in drug investigations,” Swihart said. “We’ve also done a few child pornography investigations and online enticement investigations since I’ve been here so it’s good to have those relationships.”

Swihart says that having Holmgrain attend the FBI academy will help the police department. He says Holmgrain will be able to use new skills and contacts in the years to come.

“He likes to work, he likes to help and he never quits,” Swihart said. “He is going to do everything he can to make sure the job gets done and gets done right.”

Holmgrain doesn’t know yet when he’ll go to the academy in 2019. Those details still have to be worked out. He and his wife Sarah have three children and two grandchildren.