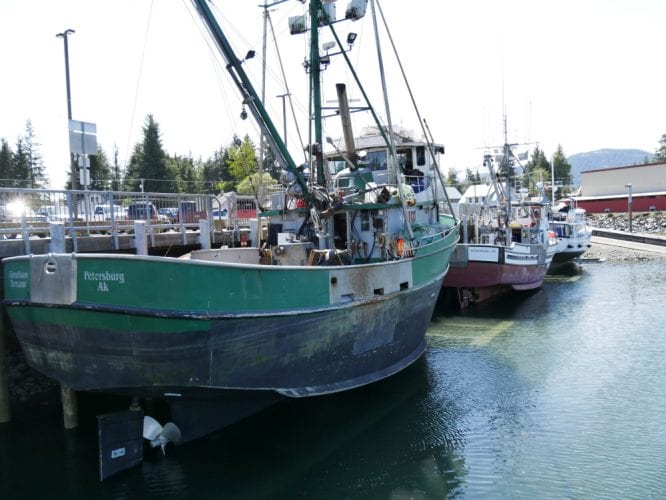 Three fishing boats are on the grid in Petersburg’s South Harbor for cleaning and maintenance Thursday, May 17, 2018. Fees to use the grid and other charges in the harbors could be increasing in July. (Joe Viechnicki/KFSK)

The cost of tying up in Petersburg’s harbors could be going up this summer, along with most of the other fees for using harbor facilities.

Petersburg’s borough assembly Monday will tackle the first reading of an ordinance that would hike moorage rates by nine percent and increase other harbor fees around 12 percent. Charges would be going up for people who live on their boats, along with fees for people and businesses using the boat launch ramps, drive down dock and vessel maintenance grids. The price for tour ships docking here also would increase as would the price for boats berthed here long-term and on a transient basis. Those rates could all go up starting in July, if the assembly supports it.

Last year the assembly eliminated a 10-percent discount for customers who pre-paid yearly moorage. Rates went up in the harbors in 2012 and for some harbor users again in 2015. Also that year a financial analysis completed as part of the borough’s waterfront master plan recommended further rate hikes in order to cover expenses in the harbors.

The borough’s budget for the fiscal year starting in July includes the harbor rate increase. That budget is in its second reading Monday with the public hearing scheduled for the spending plan. The assembly hasn’t passed any amendments yet to the budget but still could in this reading or another early next month.
Also on the agenda for Monday is an ordinance designating a new piece of borough property at 313 Mitkof Highway for some unnamed public use, instead of selling it to a private land-owner.

The assembly will also consider input on Alaska Mental Health land at the corner of Mitkof Highway and Papke’s Landing Road that is being subdivided and could be sold. The borough may send a letter requesting Mental Health make it clear in advertising the land that the borough is not responsible for road access or utilities.

The assembly meets at 6 p.m. Monday, May 21in borough assembly chambers. KFSK will broadcast the meeting live. Also tune in to borough business, a call in show with assembly members on Monday at 12:30 just after the midday news.