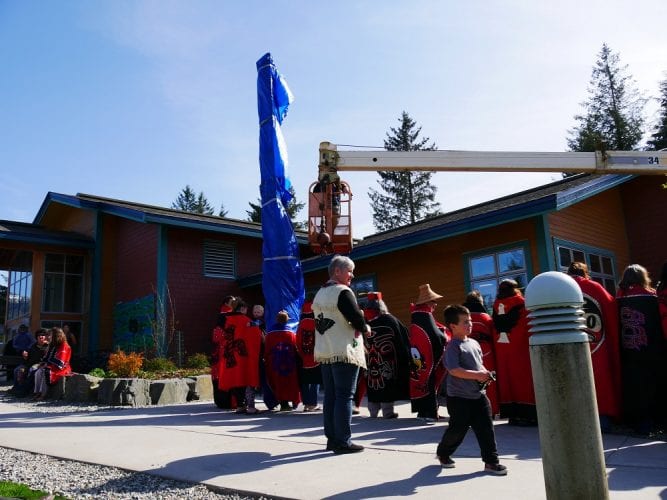 The Seetka Kwaan Dancers formed a line in front of the library wearing red and black traditional regalia. The pole behind them was wrapped in a tarp and duct tape, so only a handful of people in town had actually seen it uncovered. When the dance was over, former Petersburg resident and native leader Nicole Hallingstad began to speak, paying tribute to her Norwegian and Tlingit grandmothers. She said both Alma Wallen and civil rights leader Amy Hallingstad of Petersburg were excellent storytellers.

“The stories of other places, of the clothing, of the food, of the dances of their people, opened up a universe that was so much bigger than the town I lived in,” Hallingstad said. “So it’s no wonder I spent so much time at the Petersburg Public Library exploring that universe.”

Hallingstad called the tall sculpture to her left “a new form of storytelling.” New, because this is not a traditional totem pole. It does not contain tribal crests or represent a particular clan.

“The Haida word for a totem pole is gyáa’aang, which literally translates to history standing straight up. It tells that singular story,” Hallingstad said. “What we’re about to see does not contain one story. It represents common figures, and the story it tells will depend entirely on what the viewer takes away from it.”

The piece includes characters inspired by popular children’s stories, but nothing straight out of a book. It is also different from a totem pole in that it was installed without a traditional pole-raising, which involves ropes and tripods and a group of people working ceremonially. Joseph said space was limited by the landscaping in front of the library, so the pole was raised using machinery.

“We covered it and had it all ready for the unveil, and we don’t have to worry about kids running around. When you have heavy equipment I’d rather just do that without people around,” Joseph said.

But, especially covered up, it looked like a totem pole. So when it appeared, some Native people in the community were frustrated that they hadn’t been involved. The morning of the unveiling, Joseph met with community members to talk through their concerns.

Brenda Louise was one of about ten people circled up in a library conference room. She said she drove by when the pole was going up and the scene looked and felt empty.

“I don’t wish any ill will or take any offense. You know my concern is that it all feels good in a good way, and that there’s appreciation for what you’ve done. And reciprocation too. And that it’s a win. That everyone feels they’re a part of it,” Louise said.

Eventually, the group began reminiscing about when two totem poles, also works of Joseph’s, were placed downtown nearly 20 years ago. Mike Schwartz served on a committee to bring those poles to town.

“The pole was to be raised in the fall, on a rainy, windy, raw day at one o’clock. And three of us are looking at each other at 12:30 going, where are the people? By five to one, we had 600 people,” Schwartz said. “There was a healing that happened here, when those totems went up.”

“Yeah, for a lot of people,” Louise said.

Compared with that memory, the quiet arrival of this new pole was disappointing for some. But practically speaking, Will Ware said there is no protocol for installing a pole like this one.

“Who do you contact – who do you talk to about putting a pole up that has a rabbit with big bunny ears and a jacket on? It’s a story pole,” Ware said.

Traditionally, you’d contact clan leaders, discuss which crests and designs to include, and seek permission. But this piece was dreamed up by Joseph – he pitched it to library staff years ago, and they asked some big donors to help pay for it. Ware asked Joseph how he’d like the community to celebrate his work.

“I would love to see members from both sides – eagle, ravens, maybe do a song? That would be awesome. I don’t really know all of the Native community here – that would be great,” Joseph said.

Eagle and raven are the two Tlingit subgroups or moieties, which are further divided into clans. “Maybe give a balance from that side. Because there is an eagle and a raven on this pole. Without being specific to any clan or anything, it’s just our people. I couldn’t not have us represented in there.”

Members of the Seetka Kwaan dance group who were in the room made plans to perform at the unveiling. The library staff looked relieved, and talked through the program of the event. That afternoon, both moieties were represented in the dancers’ regalia. 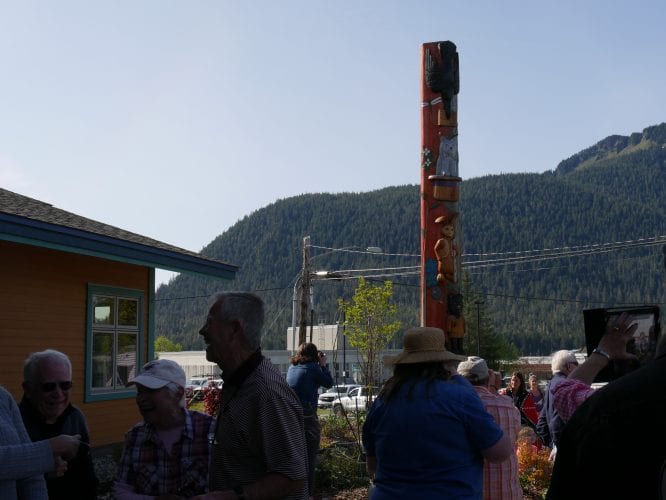 Around 100 people turned out to welcome the new storyteller’s pole. (Alanna Elder/KFSK)

(Editor’s note: this story has been corrected to identify Brenda Louise as the speaker the meeting with Tommy Joseph and correct spelling on Alma Wallen)