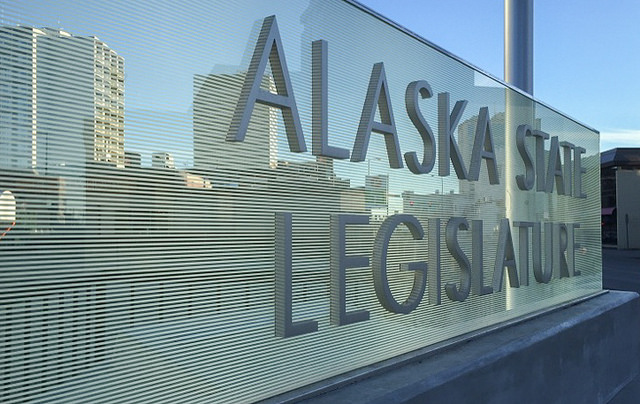 The sign outside the Anchorage Legislative Information Office, March 4, 2016. (Photo by Megan Ahleman)

It looks like voters will not have a chance this fall to weigh in on a legislative ethics ballot measure. Alaska’s Lieutenant Governor and the attorney general’s office have determined a bill passed by the legislature this spring is similar enough to keep the issue off the ballot.

More than 40,000 voters last year signed a petition to put the Alaska Government Accountability Act on the ballot. It seeks to end per diem pay for legislators if they fail to pass a budget in the first 121 days of the session. It would also toughen state law on financial conflicts of interest for legislators, gifts from lobbyists, reimbursement for foreign travel and campaign spending by foreign corporations. House bill 44 passed in May would do many of the same things.

Sitka Democrat Jonathan Kreiss-Tomkins has backed both the ballot measure and the legislation. He prefers a public vote on the issue but called the reforms in the legislation a huge improvement over the existing situation in Juneau.

“You know the no-budget, no-pay concept which I think is a substantial disincentive to be in session for months and months and send out pink slips and all the dis-function that we’ve seen the last three years,” Kreiss-Tomkins said, adding, “some reforms with lobbyists buying legislators hundred dollar dinners at fancy restaurants which I think just disagrees with people’s sense of probity and propriety, particularly when by the way we do get per diem every day so we can buy our own meals, or should be.”

“I like the idea of it going to a vote in some respects,” Walker said during a visit to Petersburg in May. “The advantage of that is it can’t be changed for a couple years. Once it goes to a vote that’s the advantage of that. So I like the people being able to say something about that but if it’s substantially similar, I think to veto it just so there could be a vote, I think that’s probably not in the best interest, but I do like the idea of people being able to vote on that, I do.”

Walker also proposed cutting off both salaries and per diem pay for lawmakers if they didn’t pass a budget by the 90-days session limit passed by voters in 2006. That successful ballot measure hasn’t had a lasting impact on the length of sessions. Lawmakers have continued to meet well after that deadline, including last year, when it took multiple special sessions and the legislature waited until days before a shutdown of state government before passing a budget bill.

Nikiski Republican Mike Chenault was one of 15 in the House voting against the ethics reform bill this year and said he doesn’t know how effective it will be.

“We stay in Juneau a lot longer anymore but most of that’s not due to the budget cycle, most of that’s due to the governor calling us back for either additional revenue measures or some other piece of legislation, the gas pipeline, things like that,” Chenault said, also during a recent visit to Petersburg. “I think we can get our business done in 90 days. I don’t think we should be there any longer.”

Past legislatures have passed a bill, keeping an issue off the ballot, only to turn around and repeal that bill later. The constitution prohibits that within two years of the passage of a ballot initiative. Those who oppose the reforms say they’ll start making changes in next year’s session.

“I personally feel the restriction of no alcohol allowed to be purchased by a lobbyist in a dinner, you know, not a glass of wine, not anything, is a little ridiculous,” said Sitka Republican Bert Stedman, among the six voting against the bill’s passage in the Senate. Stedman expects the legislative council, made up of House and Senate members, to address any ethical problems for lawmakers and he opposes the changes in the bill and the ballot initiative.

“So the legislature took action on it themselves so we’ll be back changing it next year,” Stedman said. “Frankly there’s some things in it that are just ridiculous. You know it’s a feel good type of bill. We don’t have the legislative ethic issues we had a decade ago, anywhere near that I’m aware of.”

Other lawmakers have said the reforms will make it so they can’t afford to continue to work in the legislature.

Supporters of the reforms including Kreiss Tomkins say they’ll fight attempts to change or repeal the legislation next year. They can still challenge the ruling knocking the issue off the ballot.

(Editor’s note: this story has been corrected over the 90-day session limit approved by voters and the impact on length of sessions)