Optimism scarce as commercial fisheries start up in Southeast 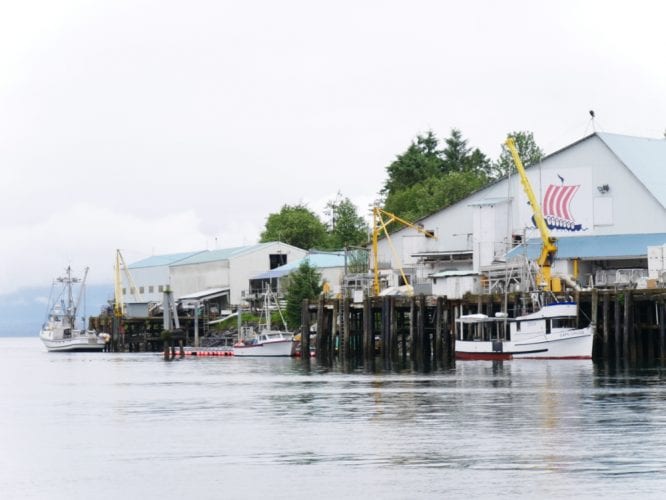 Activity is picking up in the harbors in Petersburg this week as fishing boats and tenders prepare for the start of several commercial fishing seasons, but optimism is a little scarce on the docks. Fishermen this summer are feeling the impacts of reduced catches, low forecasts and increasing competition from marine mammals.

The harbors buzz with the sound of power tools, boats loading gear and coming and going from their stalls. It’s time for last minute projects before hauling crab pots to the fishing grounds or testing nets and training new crew.

In South Harbor, Charlie Christensen is readying the Erika Ann for some tendering work in the early summer. Then he’ll switch over to seining once pink salmon start coming in. He has a long list of bad news for his fishing season, stretching back to management decisions by the Alaska Department of Fish and Game for golden or brown king crab. He also points to whale predation on black cod, lower prices for halibut and black cod and a cut to the halibut catch by federal fishery managers.

“With the reductions it’s taken a lot out of our income and with this prediction for the salmon season, it’s gonna jam all the boats into one area, so it’s gonna split the pie up pretty thin,” Christensen said. “Ah no there’s nothing really bright about this season at all. If I was in Petersburg I’d be kinda concerned about the future economics of this town unless things get better.”

For the salmon season, fishery managers forecast an average harvest of 23 million pink salmon this summer but don’t expect much of that harvest to come from the northern part of the region. The parents of this year’s pinks spawned in 2016. The catch that year was less than 18 and a half million and the fishery was declared a disaster.

Taylor Norheim, also runs a salmon tender for Icicle Seafoods, and he’s pessimistic about growing populations of marine mammals and their impacts on commercial fishing.

“The biggest issue I see with managing it properly is you got the Marine Mammal Protection Act, which protects all those predators, which are eating everything,” Norheim said. “And I don’t understand how the Fish and Game is supposed to manage something like they’re gonna shutdown crabbing early it sounds like and then sea otters are going to move in and eat everything. You can’t manage them, just like you manage wolves for the deer populations and whatnot. You cannot manage sea otters or the, maybe sea lions. I don’t know what impact they have, and the whales especially.”

Hatchery chum salmon returns around the region are projected to total more than nine million and that could be one bright spot for fishermen.

Harold Thompson is getting set for the season onboard the St. Lazaria, a tender for Icicle Seafoods. He expects to be transporting some of those hatchery chum from Juneau.

“Well we’re hoping for a good amount of fish up in the Juneau area which is normally one of the better areas for the gillnetters,” Thompson said. “We’re not going to get much time compared to some years it sounds like but I think they might do fairly well if the fish show up and the price is high.”

Commercial salmon fisheries around the region are being impacted by historically low returns of king salmon. Gillnetters have delayed season starts and a mesh size maximum in the early season to limit the catch of king salmon returning to Southeast rivers.

Gillnetters and purse seiners both were scheduled for their first openings Sunday, June 17.

Fish and Game expects 2-3 openings for seiners targeting hatchery chum salmon at Hidden Falls on Baranof Island. The forecast for Hidden Falls hatchery chums is just under 600-thousand fish (593,000). One third of that is needed for broodstock, leaving just over 400-thousand chums for commercial harvest.

Spring time trolling for king salmon has been limited to a few areas around hatchery returns and on the outer coast. Many other areas remain closed to allow wild stock kings to return to their spawning rivers. Trolling opens in a few other areas this month, including some for targeting those hatchery chum runs. By early June, the spring season catch total for the region had only topped 2500 Chinook salmon.

Meanwhile others are heading out for a mid-month start to summer Dungeness crab season.

Last year’s summer season was shortened by three weeks, only the second time since 2000 for a shortened season. The summer catch was one point three million pounds, the lowest harvest in over three decades. However, a shortened fall season produced a better than expected harvest.

The season length is determined by the catch from the first week of crabbing. Fish and Game expects to make that announcement by the end of the month.