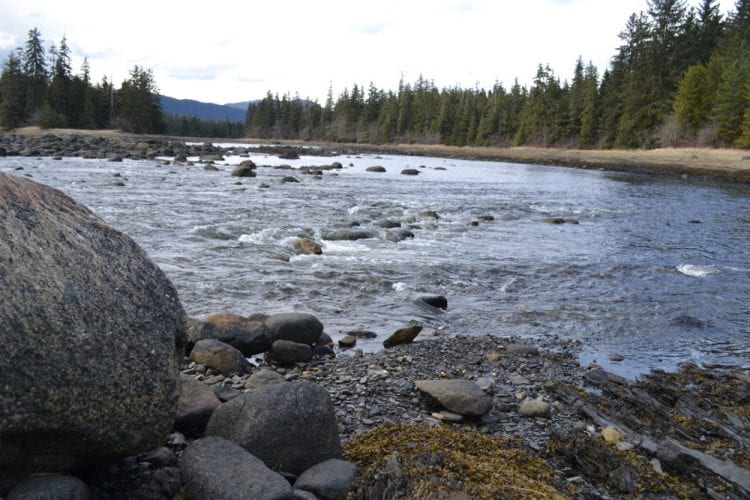 2600 Crystal Lake Hatchery kings are forecast to make it back to Blind River Rapids and the Wrangell Narrows this summer. (Joe Viechnicki/KFSK)

For good and for bad, king salmon runs around Petersburg are coming in as forecast so far this year.

Anglers have only been allowed to keep Chinook salmon in a limited few areas with hatchery kings for the first part of this month. And much of the sport fishing effort in this area has been focused on the Wrangell Narrows and Blind Slough. Anglers there are hoping to catch some of the 2,600 adult Chinook forecast to return to the Crystal Lake Hatchery, about 18 miles south of Petersburg. That’s an average return expected back to the slough this year.

“So the fishery’s been open for two weeks now, or almost two weeks, since June 1st and the catch rates are about what we’d expect with that type of forecast,” said Patrick Fowler, the Alaska Department of Fish and Game’s area management sportfish biologist. “It’s probably a little bit slower than last year but some decent numbers coming out of there.”

Those hatchery kings are showing up in the fresh water of Blind Slough and are being caught by anglers from shore at Blind River Rapids as well as boats trolling in the salt water of the Wrangell Narrows. In the Petersburg area, the only other spot that’s been open in early June is right around the mouth of City Creek near Frederick Point, about three miles from downtown. Very few kings are expected back from that hatchery release this summer. The bulk of those fish were lost in a fire at Crystal Lake Hatchery in 2014. Fowler said only older six-year-old kings and younger four-year-old jacks are expected to show at City Creek.

However, he said last year did see a good return at the new release site. “Yeah we actually had some surprisingly good numbers there, some good activity, some folks were harvesting,” Fowler said. “So it seemed to be, that was really our first chance to get a good idea of how those fish are coming back since we started this release and yeah, it looked pretty successful.”

Prior to this month, anglers couldn’t keep kings on most inside waters in April and May to conserve wild-stock kings returning to Southeast rivers. That includes the Stikine River near Wrangell, where 6,900 adult kings were forecast to make it back to the river this year. That’s well below the department’s goal for fish returning to spawn. And Fowler said so far it looks like that forecast is holding up.

“On the Stikine River we have a crew that’s catching adult king salmon as they return to Kakwan Point,” he explained. “And so their catch per unit effort is trending very close to what we saw last year, which was very close to what we forecasted. So it’s going to be a very poor year. We don’t expect to meet our escapement goal. And that’s kind of exactly what our early indications of the adults returning to the river are.”

Typically by this time of year, about 60 percent of that run has made it to the test fishery site on the river and fishery managers have a pretty good idea of the run strength.

The waters of District 8 around Petersburg, Wrangell and the Stikine River remain closed to king salmon fishing until July 15th. But starting June 15, anglers can keep kings in district 10, the waters of Frederick Sound north of Beacon Point as well as other areas further away from the mouth of the Stikine.