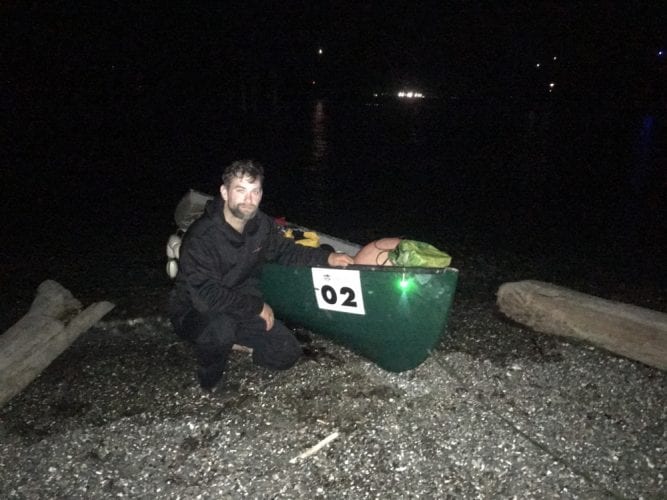 Jacob Hammer readies a borrowed 13-foot row boat before the start of the first part of the Race to Alaska, June 14, 2018 at 3:45 a.m. in Port Townsend, Washington. (Photo courtesy of Kathy Pool)

A Petersburg fisherman this month rowed his way through the warm up of this year’s Race to Alaska from Port Townsend, Washington to Victoria British Columbia. Jacob Hammer dodged container ships and fought through strong tides and wind in a 13-foot rowboat. He has his sights set on the full race next year.

The beginning part of the Race to Alaska is called the proving ground. Teams have to be able to finish that in order to qualify for the remainder of the race. The 39-year-old Hammer decided only to do that stretch this year.

“There’s no actual winner in that race,” Hammer explained. “It’s just if you don’t qualify, if you don’t finish then you’re not allowed to continue onto the 750 miler up to Ketchikan. And so they really judge this, the way the boss man said it, was it’s an intelligence test, to see if you can handle the nautical skills, the marine traffic, the tides, the weather and everything like that.”

Growing up Hammer had heard the local story of Petersburg’s one-time post master and her husband, Mildred and Vernon Counter. That couple rowed a 17-foot cedar canoe from Washington to Ketchikan, just after getting married and right at the start of the second world war. That story inspired him and he felt challenged by the Race to Alaska.

“Not for any good reason but this was something that I could do,” Hammer said. “It was a challenge I could provide for myself. There wasn’t going to be any prize money that was worth it to me to not going but it was just something that I really felt like, something where I could challenge myself and compete against myself and there wasn’t really anything I had to worry about for other people.”

While he was rowing alone, Hammer said he received help in getting ready for the race from current and former Petersburg residents. He ended up borrowing a row boat for the journey. It was a 13-foot replica of the historic double ended wooden boats made by the Davis family of Metlakatla.

“The boat was extremely basic but it’s 13 feet, it was kind of like a wide canoe, double ender of course,” Hammer said. “I actually could make pretty good time if the water was calm and there was nothing stopping me, I could make four knots relatively consistently. So the boat was actually really great. But again, a lot of the racers and competitors were kind of amazed I didn’t have a sliding seat or carbon fiber oars. I had never touched a carbon fiber oar. For being an old boat it did quite well.”

His row took two days. The proving ground is 40 miles in a straight line from Port Townsend to Victoria, across some big open water in the Strait of Juan de Fuca and two sets of shipping lanes. Hammer definitely didn’t follow a straight line, dealing with winds and tidal currents, he took a much longer route. The first day he rowed west along the shoreline to keep out of the wind. He spent the night camped out on the beach at Port Angeles. The second day he rowed across the Strait of Juan de Fuca.
He woke up that day hoping for light winds. Instead he saw whitecaps in the harbor.

“I was hoping it was a morning wind, it would die out,” he said. “So I rowed about six miles out, took a break, checked the weather and that’s when I saw the weather report that it was going to be 12-17 gusts most of the area with gusts to 25 in certain areas. So I took a few minutes, took 30 seconds to lose my cool and then started to compose myself. And I just kind of hit a point where I realized I was there to challenge myself. I was there to prove my nautical skills, not to anybody else but to me and I knew I could do it. I was a little frustrated that I didn’t push through the day before somewhere but… six miles offshore of Angeles and I realized I had a hard in for me, or a hard day ahead of me. So I took a compass bearing and I put my head down for about 45 minutes or so and just didn’t stop.”

One of the most challenging parts was dodging container ships. Remember, he’s rowing a 13 foot boat in less than ideal conditions.

“There was three or four container ships within the first few hours and I actually had to wait maybe 10-15 minutes for two different ones just trying to get a read on where they were at, making sure I didn’t get smashed,” Hammer said. “And that kinda hurt me but that’s what you have to do. I definitely could see the tide taking me while I was waiting. You know I would say the marine traffic was one of the more challenging aspects of the whole thing. It’s just one of those mistakes you can’t make twice.”

Hammer figures he paddled about 25 miles that second day in about 10 hours. He was battling wind blowing in one direction stacking up waves from an outgoing tide in the other direction.

“There was definitely a few moments when those first gusts came through,” he explained. “I was re-evaluating my decision and that’s when the waves started breaking in over the side. I just calmed down. The boat was floating. I was still moving. I bailed out. Next gust came through, blew some waves under the boat. And by that time I realized I was fine. As long as I kept my head about me and started making good decisions. I didn’t even have to make it to the finish line I just had to make it to shore.”

Hammer made it to shore and made it to the finish. And he’s not deterred from doing it again. Next year he wants to come back with a two or three person team and a little larger boat and he’s aiming to do the full 750 miles to Ketchikan. He had thought about that this year but wasn’t able to get sponsors lined up and a team organized. For now though, Hammer heads back to work and a summer of gillnetting salmon.