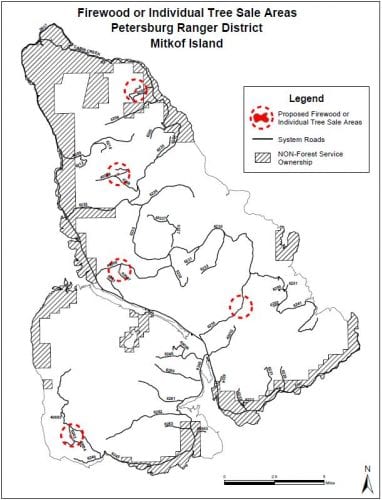 Image from the U.S. Forest Service

The U.S. Forest Service is proposing to offer trees for commercial firewood sales on Mitkof Island. Personal use firewood cutting is already allowed. But commercial sale of that wood is something that local residents have sought on Mitkof.

“The people in Petersburg and really all over Southeast are allowed to take a tree or couple trees, small volumes of firewood for personal use but the public in Petersburg has expressed an interest in being able to harvest firewood and sawlog material for commercial purposes and they told us that during some public meetings for the Central Tongass Landscape Level Analysis,” said Paul Robbins, a spokesman for the Forest Service on the Tongass National Forest. “So in order to be responsive to their requests, the ranger district is seeking a categorical exclusion in order to allow for the harvesting for commercial use within a 70 acre area.”

Federal law requires the agency to analyze impacts from timber cutting and other uses of the forest. Robbins said the Forest Service will be looking into whether the program can be done without causing a significant impact on the forest land on the island

“And if we can establish that then we don’t have to go through a full environmental analysis or environmental impact statement and we can just move forward with the process of trying to get folks out there getting the wood that they need,” he explained. “So what’s happening right now is we’ve got all of our, not all of ‘em but we’ve got silviculturists, wildlife biologists, hydrologists and bunch of other experts out there in the field going over these acres to analyze and make sure that if we allow this activity that there will be no significant impact.”

A program of commercial use firewood permits is already offered on the Wrangell District. Robbins said other micro timber sales have been offered in the Petersburg area before but the volume has been larger than the firewood cutting that residents have asked for. It’s possible the firewood program could be in place this year, depending on whether a larger analysis is needed.

The proposal could mean harvest of both live and dead trees on an area no larger than 70 acres. The agency is also considering individual tree sales on the Mitkof road system. There are five areas on the island proposed for firewood cutting, although the 70 acres extends beyond those five areas. One site is near Frederick Point. Others are near the 40,000 Road, off the Three Lakes Loop Road and near Woodpecker Cove.