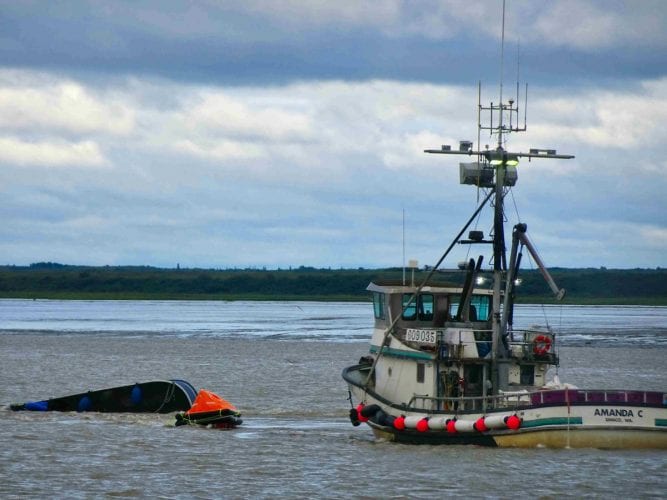 About six hours after the F/V Pacific Knight capsized, Mike Jones of the F/V Cape St. John said he saw the life raft rise to the surface of the wreckage. It was empty.
(Photo courtesy of Mike Jones)

A man is still missing and fuel is leaking from the wreckage after the F/V Pacific Knight sank near Clark’s Point on Wednesday. Thursday ADF&G closed commercial fishing in the Nushagak District due to risk of spilled fuel contaminating fish and fishing gear.

When the F/V Pacific Knight sank Wednesday, it reportedly had 800 gallons of diesel fuel and 300 gallons of hydraulic fuel on board. The Alaska Department of Fish and Game flew a survey of the area Thursday morning after hearing from a pilot and a processor that fuel was spilling from the wreckage.

“We saw quite a bit of fuel in the water,” said area management biologist Tim Sands. “What I would call kind of large patches of rainbow sheen heading southwest from where the vessel was. We flew for three miles… My concern is that I don’t know where that’s going to go and how fast it’s going to break up.”
At 1 p.m., the entire Nushagak District closed to commercial fishing, and ADF&G cautioned subsistence users on Dillingham beaches that their nets and fish are at risk of contamination.

“We do want to get people back in the water, but we just can’t afford to have contaminated fish in the product stream,” said Sands, noting that he has not recieved any reports of contaminated salmon harvested.

He noted that the scene looked “better” during an afternoon fly over. It is unclear when fishing in the district will reopen. Sands said that the diesel will dissipate eventually, but much depends on weather and how quickly salvage efforts are able to stop the vessel from leaking.

“I’m hopeful that we can do some partial openings as soon as tomorrow for Igushik beach and whatnot, but I just want to be sure,” said Sands.
According to Alaska State Troopers, the cause of the accident is still under investigation.

The 58-foot long line and seining vessel was based out of Petersburg and on contract with Icicle Seafoods as a tender in Bristol Bay this summer.

Three people were on board when the 58-foot vessel capsized. Two were rescued from the water. Alaska State Troopers are continuing their search for 59-year-old John Phillips of Juneau. However, the United States Coast Guard suspended its search Wednesday night.

“Ending a search is never easy, especially when working alongside so many people dedicated to finding the missing person,” said Lt. Stephan Nolan, the District 17 command duty officer in a written statement. “Our condolences go out to this man’s family and friends during this time of hardship.”

The last time a tender capsized in Bristol Bay was 2013, when the F/V Lone Star sank in the mouth of the Igushik River.