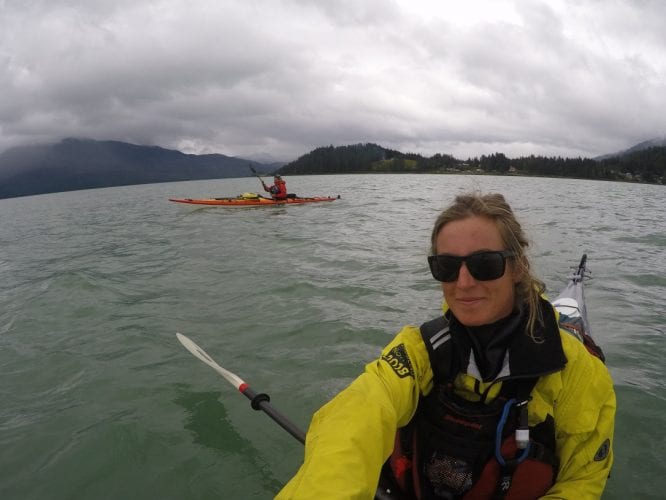 Rebecca Grim and Leonie Mahlke met on Salt Spring Island, where they both live.

“It’s a really small island in BC and it was 3 years ago, and within the first week we went kayaking together we decided that we wanted to go to Alaska together,” Mahlke said.

The idea evolved as they spent more time seeing the water and coast up close. They participated in activist demonstrations with other kayakers who were concerned about impacts of fish farming, logging, and mining on marine habitats. Mahlke said they decided to bring a camera to document environmental threats (and wonders) along the route.

“We decided to interview women along the Inside Passage, because there are so many inspiring people out there working on different projects and we wanted to find out more,” she said. “We wanted to listen to what they had to say and put their voice out into the world.”

So far, they have spoken with researchers and members of First Nations in B.C. Grim said a major challenge to the film project is that they have to spend most of their time paddling, so coordinating interviews has not been easy.

“What we’re learning is that it would take a long time to live along the coast and understand all of the complexities of the communities and the little micro-environments. We are definitely understanding how this is not just a few months’ project, that it’s always unraveling,” Grim said.

They have made several connections by accident. It turns out there were a few other people paddling the Inside Passage for a cause this summer. Grim and Mahlke came across two Australian women traveling the same route they were in the opposite direction to raise awareness about plastic pollution, as well as a paddle-boarder participating in the Race to Alaska to bring attention to veteran suicide.

Grim also wants to send a simple message with this trip. She said, “I would hope for young women in particular just to not second guess themselves going outside. You grow so much as an individual when you’re challenged outside and when you have to rely on your own skills and you have to plan. I think that would be a great thing for all women to have.

Mahlke and Grim plan to revisit some stops to pick up interviews that fell through during the kayak trip, and hope to finish the film project within a year or so. You can follow their trip at paddlingnorth.com.