PHS to start the school year with a few changes 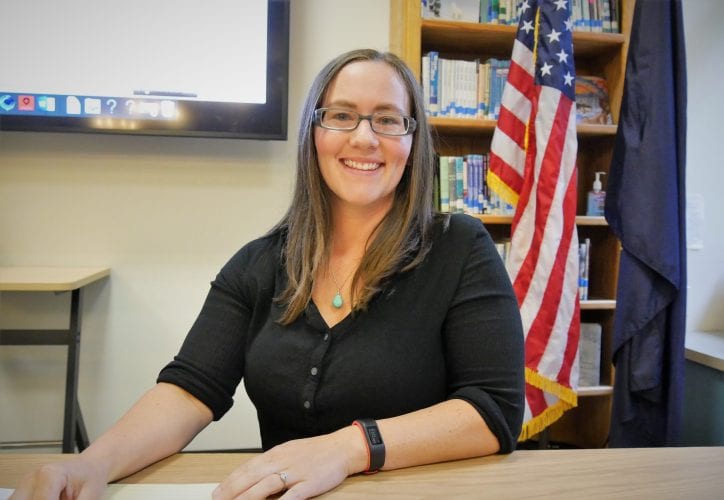 Katie Holmlund took the oath of office Aug. 14 for the Petersburg School Board. She is finishing out Jannine Gibbons term that runs until the October election. Then Holmlund plans to run for reelection. (Photo by Angela Denning/KFSK)

At Petersburg School District’s school board meeting Tuesday night, board members talked about the coming school year. As Angela Denning reports, there will be a few new changes happening at the high school.


School starts on Monday, August 27. And for high school students, it will be a little bit earlier than they’re used to.

“What that is mainly for is we’ve added a block into the high school similar to the one the middle school’s had for several years,” Dormer said. “It’s such a great time for kids to kind of breathe and possibly read a book and we’ll use that time every now and then to do some lessons whether it’s maybe Alaska Safe Children, we’ll have a welcome back assembly probably during that time in that first week.”

Another change at the high school is registering for sports is all online now through the program Arbiter Sports. Filling out paperwork is a thing of the past.

“It has been working pretty slick so far,” said Activities Director, Jaime Cabral. “Some parents have been getting done with their paper work in about six minutes for all of their kids. It’s just the logging in, sometimes it’s kind of hit and miss.”

Superintendent Erica Kludt-Painter told the school board that she registered her daughter online using her phone.

“Is it fast? Is it pretty quick to get all those forms done?” Cabral asked her.

“Yeah, it was, it worked really well,” Kludt-Painter said.

“And someone that is really good with their smart phone can get it done in about five minutes,” Cabral said.

The program sends out a reminder when students’ physicals are due. Physicals last for 18 months.

Middle School will still require paper forms to be filled out by parents and guardians of students in sports.

At the school board meeting, administrators also clarified the time period for the policy that explains the consequences for tobacco, alcohol, and drug use among students. The language in the district’s handbook has been updated to match the state’s ASAA policy, which stands for Alaska School Activities Association.

The policy runs through the activities calendar year, longer than when school is in session, but not in the summer when no activities are active.

“It is typically cross country and it starts July 25,” Cabral said. “And so anyone who participated in activities sophomore, junior, senior, or if they’re currently in cross country would be held to that policy from July 25 all the way up until the last calendar of the ASAA calendar, which would be June 1 is the last day of state baseball.”

Other changes talked about at the school board meeting were to the school board itself. Katie Holmlund took her oath of office to finish out Janine Gibbons term until the October election. Gibbons resigned in June.

There are three school board seats up for the local election in October. School board members, Holmlund, Cheryl File, and Jay Lister, all said they are planning to run for reelection.
The next school board meeting will be September 11 at 6 p.m. That’s an hour earlier start time than in the past. The school board decided to move their monthly meetings to 6 p.m. so it wouldn’t be such a late night for students and community members wishing to participate.