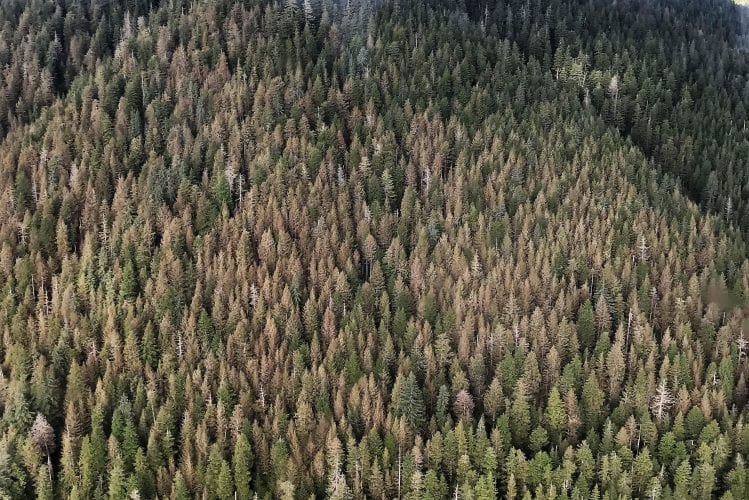 Yellowish hemlock trees are seen from an airplane in Southeast Alaska. The color comes from sawfly larva eating and killing some of the leaves. (Photo by Elizabeth Graham)

Some parts of the forest in Southeast Alaska are a little off color. Hemlock trees are turning yellow and brown from a sawfly outbreak. But as Angela Denning reports from KFSK in Petersburg, there’s not much to worry about.

The U.S. Forest Service started getting a lot of calls about yellowish trees on hillsides in Southeast Alaska this month. The color is from dying hemlock leaves, which were damaged by an insect. So, they got their experts to look into it.

Elizabeth Graham is an entomologist who works with the Forest Service in Juneau in a division called Forest Health Protection. And she’s really into bugs.

“This year has just been extraordinary to see the amount of activity,” Graham said. “They are just so cool; the things that insects can do.”

The sawfly’s larvae-which look like tiny green caterpillars–are feasting on hemlock leaves as part of their short life cycle. They gorge on leaves just before creating their cocoons. As they eat, the leaves turn yellow and fall off. 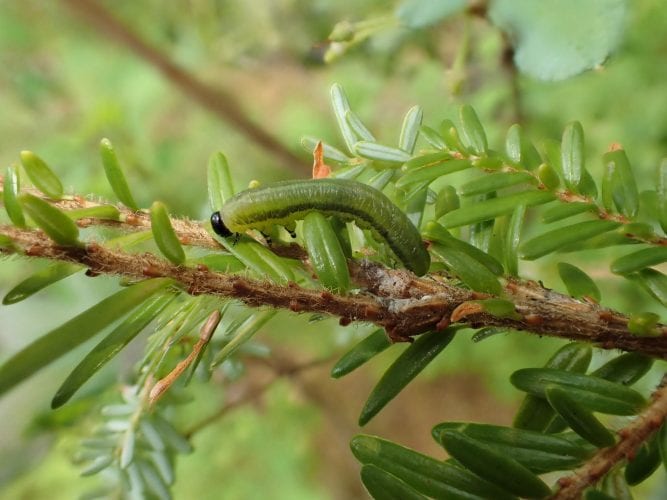 A sawfly larva eats leaves on a hemlock tree in Southeast Alaska. (Photo by Elizabeth Graham)

“When they’re feeding in this great abundance like this, it’s almost like you’re standing in the woods and it can sound like it’s raining,” Graham said. “But it’s not actually raining. Larvae are feeding and going to the bathroom.”

The feeding frenzy damages the trees but it doesn’t kill them. The sawflies only eat old needles leaving the new growth alone.

Graham and other scientists have flown aerial surveys and taken samples on several islands—Mitkof, Kupreanof, Prince of Wales and Admiralty. They did see a sawfly infestation. But they’re not that concerned. The main reason is because sawflies are native to the region. So, they’re part of the normal ecosystem. And that means there are other species that keep the sawfly populations in check. One is fungi, which infect the larvae but this summer’s hot, dry weather hasn’t been a good year for them so sawflies have flourished.

Another natural sawfly control comes later in the cycle and that’s the parasitoid wasps.

“Which are really, really cool. They actually lay their eggs inside these pupal cases and so the parasitoid wasp is feeding on the pupae inside the case and then they will eventually burst out of the case, sort of like an alien,” Graham said laughing.

And Graham is hoping that some of those alien wasps will emerge from the sawfly cocoons soon. She’s collected several of the cases to take back to her lab to observe. 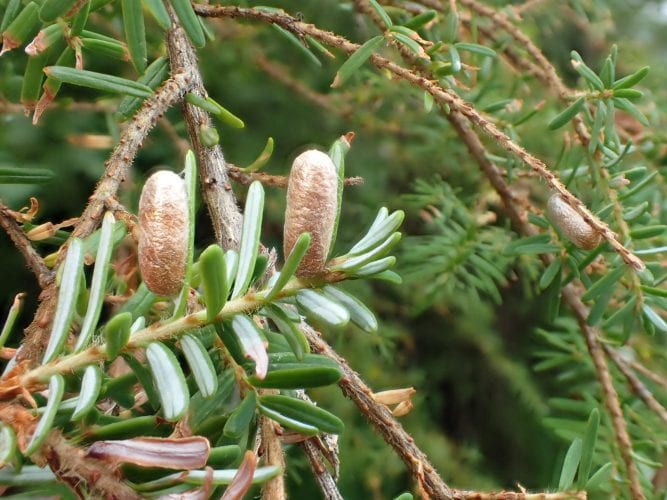 Sawfly cocoons or pupal cases are seen attached to tree leaves and limbs in Southeast Alaska. (Photo by Elizabeth Graham)

There is another insect that can pair up with the sawfly to cause problems. That’s the Western Black-Headed Budworm. They feed on the trees new growth. So, if they are having an outbreak at the same time as the sawfly, that can actually kill the trees. But scientists haven’t seen that this year.

It would take a few years in a row of the sawfly’s population to go unchecked for there to be a cause for concern. And the bugs do play an important role in the forest.

“Birds eat them, rodents, small mammals, it’s an abundant food source,” Graham said. “It’s not something we would want to eradicate.”

This fall the sawfly pupae will emerge from their brown cases as tiny wasps, but not the kind that sting. They’ll mate up, then lay eggs, which overwinter and hatch in the springtime.

Graham and her colleagues will continue to monitor them to make sure they’re damaging trees but in their normal, good-for-the-forest way.