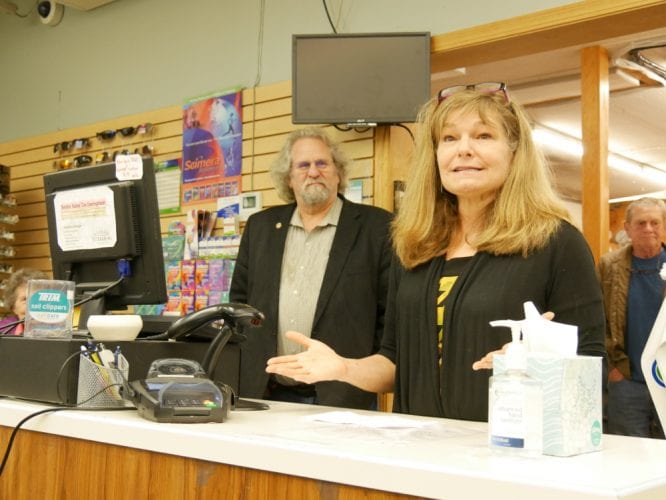 Weather kept Governor Bill Walker from attending a signing ceremony for a pharmacy bill in Petersburg this morning. Walker was unable to fly to Petersburg for the signing of House bill 240. It’s a bill that creates tighter regulation on pharmacy benefit managers, or PBMs. Those are companies hired by health insurance providers to negotiate drug prices with the companies that make the medications and the businesses that sell them.

Petersburg Rexall Drug store still held a community gathering Monday morning to honor the legislation becoming law. Pharmacist Cate Kowalski has been among the business owners in Alaska pushing for a change in state law.

The governor’s signature wasn’t a done deal. Following passage of the bill in May Walker said he’d have to take a look closer look at the legislation before signing it.

Kowalski and other pharmacists in Southeast have been lobbying for the change for about a decade. She noted the work of Barry Christensen at Island Pharmacy in Ketchikan, Dirk White of White’s Pharmacy in Sitka and Scott Watts at Ron’s Apothecary in Juneau.

Small businesses say the PBM companies frequently reimburse them below cost for medication, forcing them to take a loss. The bill creates a more transparent appeal process for pharmacies disputing the reimbursement amount. And it gives the state’s Division of Insurance the final say in those disagreements. It also ends prohibitions on pharmacies telling customers about a cheaper out of pocket option for medication and a mailing restriction to rural parts of Alaska.

The bill was sponsored by Fairbanks Democrat David Guttenberg and had legislators signing on as sponsors from both sides of the aisle. Guttenberg was able to attend the signing ceremony after arriving in Petersburg Sunday. He praised the work done by the pharmacists to get the bill passed.

“You know being articulate, focusing about local pharmacies, how important they are in our local towns when there’s not a big pharmacy or chain store and the loss of them and the way there are billed or not billed, that some of it doesn’t make sense but from the PBMs perspective it does but not for the people on the ground,” Guttenberg said.

The sponsor of the Senate version of the bill is Republican Cathy Giessel of Anchorage. It passed the House and Senate without any legislative opposition in the spring. It was opposed by pharmacy benefit management companies, insurance providers and their trade associations. Insurers say the pharmacy benefit managers help prevent fraud and keep the cost of medication down. They argued against giving the state the authority to decide reimbursement amounts.

The bill had support from Alaska’s Board of Pharmacy and by the National Community Pharmacists Association. Both noted that 34 other states have passed some kind of stricter regulation on these companies.

The governor may still try to visit Petersburg later today or sign the bill in another community.