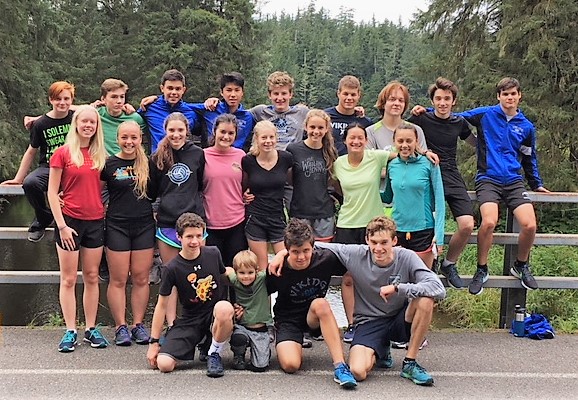 Petersburg High School girls finished first among small schools and the boys team finish second at a meet last weekend in Ketchikan. As Angela Denning reports, the teams have their sights set on the Regional and State meets coming up.


Both of Petersburg High School’s cross country teams are expected to qualify for State at the regional meet this weekend. So their coaches didn’t slow down on the conditioning drills in practice leading up to the Ketchikan meet last weekend.

“Lots of hills, lots and lots of hills this last week,” Eddy said. “So, we were expecting the kids to be pretty tired but we ended up with about nine PRs.”

Eddy’s son, Tolin Eddy, led the Viking boys team as he has all meets this season. He finished in 17th place overall and 8th among small schools.

Eddy’s goal for the season is to run the 3.1 mile race under 17 minutes. That’s 34 seconds faster than his best time. He says has a plan.

“I was thinking maybe just running behind someone that’s maybe a little bit closer to sub-17 and just pushing.” Tolin Eddy said. “That would be roughly ten seconds faster each mile so I think it’s pretty doable.”

Knowing how to pace yourself is easier said than done. Senior, Eva Lenhard, also has a plan for that.

“You do want to run your own race but because you can look at other people’s times from past races, if there’s someone running a time that I want to run I can try to run with them,” Lenhard said. “It can go bad though if they have a bad race and then you’re like, ‘OH! Didn’t do well!’ But that’s okay.”

Lenhard is consistently the fifth runner for the girls’ team this season, which puts a little extra pressure on her. The top five runners score the points. She wants to do well for her teammates because they mean a lot to her.

“As a team, we’re very close,” Lenhard said. “It’s like a second family, it’s very close. So, that’s really nice to have people that you can count on.”

The fifth runner for the boys’ team is another senior, Koren Sperl. This past summer he spent his days on a boat fishing and he says that made it more difficult going into this season. He says the sport takes a lot of preparation and focus.

“Just being able to pick somebody, run with them, and then pass them up, go hunt somebody else down because it’s really mental,” Sperl said. “And that 3.1 miles, there’s a lot of room to doubt yourself and kind of realize how much pain you are in and you just kind of have to block that out.”

Tolin Eddy agrees that the hardest part is tapping into your own mental toughness. He says running cross country for years has helped him face that challenge.

Tolin Eddy: “Like in the middle of the race telling yourself, ‘Can I do this or can I not do this?’, that’s another part that I’m kind of starting to learn as I get older and I like that part about it too.”
Denning: “What do you specifically learn about that conversation (in your head)?”
Tolin Eddy: “Just to push past the pain I think and just tell yourself that when it’s done and if you do well then you’ll feel a lot better about yourself than if you give up.”

The top seven runners on each team will go to the regional meet this weekend. To qualify for the state meet, teams need to finish in the top three at Regionals or runners need to be in the top 15.