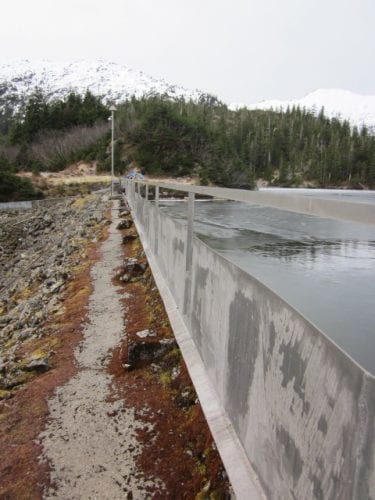 The reservoir at Crystal Lake on Mitkof Island is one of Petersburg’s sources of hydro-electric power. (Joe Viechnicki/KFSK)

Warm, dry weather this September means dropping levels at reservoirs that provide hydro-electricity in Southeast Alaska. Utility managers are hoping for a return of the rainy weather and say Petersburg should have enough hydro-electric capacity to avoid diesel generation in the short-term.

The Southeast Alaska Power Agency, or SEAPA, sells electricity from two hydro power plants on the mainland near Wrangell and Ketchikan. Those plants, along with one owned by the Petersburg borough on southern Mitkof Island, provide electricity to customers in Petersburg.

“We had a meeting today and actually talked about suspending sales out of Tyee to the south until the weather trends start to change,” Acteson told the assembly at a meeting on Monday, September 17. “Tyee is a higher reservoir,” he explained. “It tends to get locked up earlier and what we mean by that is it tends to freeze up earlier. And when we get precipitation a little bit later in the year in tends to come in as snow instead of filling up the reservoir. So we want to ensure that the northern communities have access to their dedicated resource and we don’t cut you short. It’s kind of this balancing act that SEAPA has to do. We try to maximize sales and value to all the member utilities but at the same time try to ensure that you guys have your dedicated resource.”

Under a power sales agreement, Petersburg and Wrangell have first shot at the electricity generated at Tyee Lake. It’s also sold to customers in Ketchikan when lake levels are high enough along with power from Swan Lake.

But both reservoirs are below historic levels for this time of year. September is normally a time of year when the reservoirs are usually filling up, not dropping. In the Petersburg area, the National Weather Service reports 1.59 inches have fallen in September. There’s normally well over six inches of rain by this time in September. And the normal total amount for the month is 13.65 inches. Petersburg’s on track to have one of the driest Septembers on record.

Aaron Jacobs, senior service hydrologist with the National Weather Service in Juneau, said the dry weather has impacted the region with low stream and reservoir levels.

“So it was mainly the entire region from Skagway all the way down to Ketchikan, Dixon Entrance has been abnormally dry throughout this whole time frame starting back in February but because of the impacts that we’ve been seeing from Petersburg or Frederick Sound southward that’s been elevated to a moderate drought,” Jacobs said. “And we have not seen this prolonged moderate drought probably in recent memory.”

Jacobs explained the dry weather actually stretched back to last October. It’s been one of the drier summers on record and Jacobs said diesel power generation has been needed to supplement some hydro plants in Southeast this year. He also said stream flows have been low, impacting salmon spawning streams.

Reservoir levels vary widely throughout the year and from year to year. In fact, just two years ago, SEAPA at this time was talking about spilling water from full reservoirs and lower demand because of warm weather.

“We have no record of the lake ever being as low as it is today and unfortunately with the forecast that I’ve seen over the next couple of weeks it’s just going to get worse,” Hagerman said.

Blind Slough is still generating electricity but Hagerman does not know how long that will continue. Electricity is produced there by withdrawing water from the lake and dropping it down a penstock or pipeline to a power plant.

“At some time in the next, likely in the next couple feet of lake level as we continue to drop we will, we may begin to vortex which means that the intake will start whirlpooling in the lake and drawing air in the penstock as it goes down the hill and after that starts to happen we will have to stop generating power because that air that is entrained in that water could cause damage to our equipment,” Hagerman said.

The federal license for the project also requires the borough to provide water from the lake to the nearby salmon hatchery. That will have to continue even if the plant is not generating power.

Petersburg has back up diesel generators if hydro power is not available but Hagerman explained SEAPA’s discussion of suspending Tyee sales to Ketchikan would leave enough SEAPA hydro power for Petersburg and Wrangell into the winter. And he’s hoping in the long term the typical wet weather of Southeast Alaska will return and fill hydro reservoirs.

In related news, SEAPA’s Acteson also told the assembly that the organization is moving forward with taking over operations of the Swan Lake plant from Ketchikan Public Utilities. The wholesale power provider completed a similar transfer of operations and maintenance, or O&M, at Tyee Lake in 2014. Acteson told the Petersburg assembly he has been meeting with employees at the plant and the union representing them. Those employees will work for SEAPA, instead of KPU once the transfer is complete.

“That’s one of the advantages of us taking over O & M is we can synchronize the two plants, everything from the labor contracts, training, safety procedures and all that,” Acteson said. “So we’ll be able to get both plants up to industry best practices.”

The aim is to complete the transfer by the end of the year. SEAPA has also completed some work to look at the condition of a tunnel underneath Tyee Lake and some under water transmission lines.