Development code could be up for assembly vote this fall 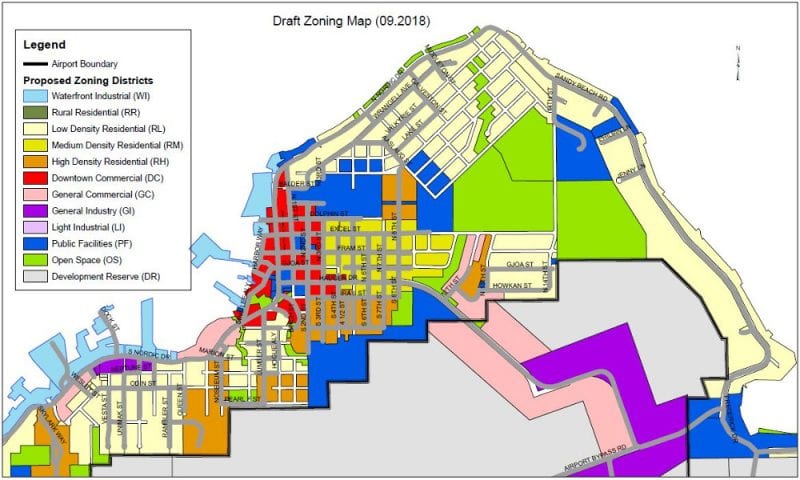 An extensive revision of Petersburg borough code on zoning and land use could be up for approval by the borough assembly as soon as next month. The new development code covers what’s allowed for land use, buildings and subdivisions. The proposal would streamline some of the borough’s approval process for permit applications. It would also create some new zoning categories for land within service area one, within the old city limits for Petersburg.

The borough’s community and economic development director Liz Cabrera explained the need for the rewrite to the borough assembly Monday. “So it’s very difficult for us to enforce a code that is really outdated and self-contradictory,” Cabrera said. “And then the second reason is when we adopted a comprehensive plan in 2016, the land use chapter in that plan had very specific recommendations such as improve your code, cause you’re having a really hard time implementing it and enforcing it and had some very specific suggestions on how we should do that.”

The current code was adopted in 1985 and revised over the past three decades. The revision is based on a model development code for small towns in Oregon. It would create new zoning classifications, with different categories for what’s allowed on residential, commercial and industrial land. Among the proposed changes are allowances for a secondary dwelling unit and tiny house in some parts of town where that’s not currently allowed. The revision would also create a downtown commercial district and a new category for light industrial use. The borough has also released some draft maps showing where the new zoning could be enacted at a later date. But Cabrera cautioned that the revision of the local law, not the zoning maps, was the big change.

“A lot of the boundaries that we currently have in our zoning, you know where residential areas are, where commercial areas are, industrial, those really do not change,” she said. “So I think a lot of people really get hung up with the map but the fundamental changes are really going to be in the code. And so I can’t stress enough that really where you wanna look for changes is in the code, not necessarily in the boundaries and the colors of the map. The map is a good reference point but, again, you really want to look at the code behind that map.”

The borough assembly would have to approve three readings of an ordinance to adopt the new proposed code. Those could include multiple chances for public comment. That process could start as soon as the assembly’s meeting October 1st. The borough has posted the code, summaries of changes and draft maps on its website.